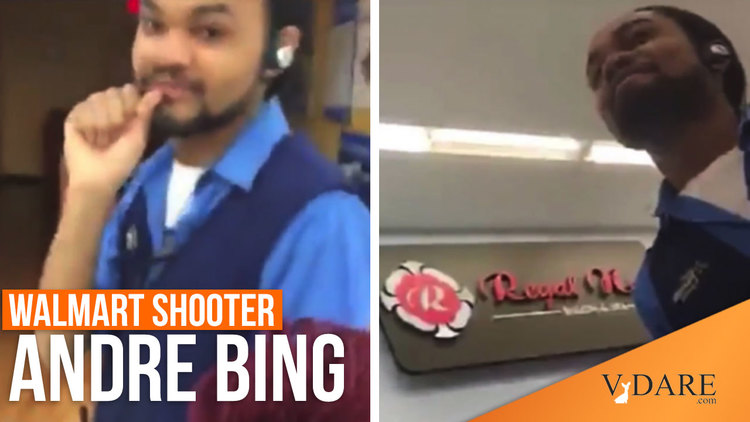 Earlier: What Does VDARE.com Mean By A ”Disgruntled Minority Massacre”?

A black Walmart supervisor walked into a break room at the store and started shooting. The Washington Post’s ”What we know about Walmart shooting suspect, a Virginia store employee” story doesn’t use the words black or white:

Walmart shooting suspect was a store manager, company says
Andre M. Bing had worked at Walmart since 2010 and was an overnight supervisor at the store in Chesapeake, company officials said
By Peter Hermann and Tom Jackman
Updated November 23, 2022

CNN has a story about how paranoid and distrustful of the government Andre M. Bing was. Paranoia and distrust of the government are much more common in the black community than the white community, but this is written (again without the words black or white) in such a way that CNN readers are bound to assume this is a white shooter.

Several coworkers of the Walmart supervisor suspected of committing the deadly rampage inside a Chesapeake, Virginia, store said the shooter had exhibited odd and threatening behavior in the past.

Andre Bing, the suspected gunman who worked as a night shift team leader, could be gruff with fellow employees and expressed paranoid views about the government, according to interviews with coworkers.

“He said a lot of disturbing things,” said Donya Prioleau, who said she was in the employee break room when Bing entered and opened fire unexpectedly....

She said Bing “came in, shot three of my friends … before I took off running. Half of us didn’t believe it was real until some of us saw all the blood on the floor.”

In the past, Prioleau said, Bing could be “condescending when he spoke to us. He didn’t have good communication skills. He was quite mean to a lot of us.”

Shaundrayia Reese, who worked with Bing from 2015 to 2018, described him as a loner.

“He was always saying the government was watching him. He didn’t like social media and he kept black tape on his phone camera. Everyone always thought something was wrong with him,” Reese said.

A video Reese says she took in 2016 shows a man she identifies as Bing talking to people before realizing he’s being filmed and walking away.

“He didn’t like to be recorded,” Reese said. “He was always scared that the government was listening.”

Joshua Johnson, who worked as a maintenance worker at the store until 2019, also told CNN that Bing had previously issued ominous threats if he ever lost his job.

“He said if he ever got fired from his job he would retaliate and people would remember who he was,” Johnson said.

[Coworkers say Walmart shooter had exhibited odd and threatening behavior in the past, by Caroll Alvarado and Curt Devine, CNN, November 23, 2022]

24-hr rule on everything, but if this holds up it’s an atypical workplace shooting. A worker murdering lateral colleagues and/or the boss is the sort of thing you usually think of with this kind of crime; I don’t immediately recall a workplace homicide of subordinates. https://t.co/WMlgwE3FeV

So two stories from major media corps are hiding the fact that this is a black gunman, and it won't be promoted in the media.

Days after the Colorado shooting that has animated the left because of a claim it was a right-wing anti-trans hate crime, there was another mass shooting in Chesapeake, VA where 6 were killed. But this hasn't received as much attention. This is the deceased gunman, Andre Bing: pic.twitter.com/P2tAAm6nG7

Let me remind of the category we call a Disgruntled Minority Massacre —when a member of a minority group shoots up their white coworkers, employers, or ex-employers—after complaining of ”racism.” (Sometimes the MSM investigates the deceased for ”racism,” to see if, as Steve Sailer puts it, they ”had it coming.”)

We don't know what color the employees Bing shot were, we only that he was black, and he threatened that “if he ever got fired from his job he would retaliate and people would remember who he was.”

That's very typical of the ”Disgruntled Minority Massacre” phenomenon which I've been writing about since 2014: Alton Nolen Not A Muslim Terrorist, But An American Phenomenon—116 People, Mostly Whites, Have Been Killed By 18 Black “Disgruntled Employees” In The Last 40 Years.