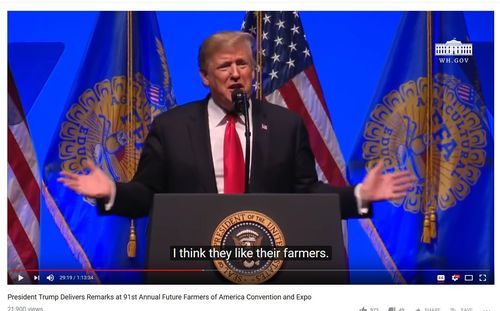 A few days ago, my younger son and I had the opportunity to hear President Trump speak again.

In fact, my son was on the stage with him!

It was at the national FFA convention, held in the city of Indianapolis, where Trump spoke to the assembled FFA members and adults and was a big hit.

The FFA is an agricultural youth organization, which operates out of American public schools.

My elder son was an FFA member in high school, as is my younger son who is still in high school. It’s a good organization, with nearly 670,000 members in over 8,600 local chapters nationwide.

The FFA’s 91st annual convention was held from October 24th-27th in the city of Indianapolis, Indiana.

My younger son auditioned for, and was selected to play alto saxophone in the National FFA band, which performed at the convention. So he and I spent a week in the great city of Indianapolis.

We didn’t know this when we set out for the convention, but the keynote speaker at the FFA convention’s final session (October 27th) was President Donald J. Trump. So my son had the opportunity, as part of the band, to be onstage with the President, and I was in the audience.

It still amazes me to see how well Trump, a billionaire from New York City, connects with Middle America. Trump spoke for over an hour and was quite well-received by the audience of young agriculturalists, their instructors and some parents.

The session was held in the Bankers Life Fieldhouse, the arena where the Indiana Pacers play. There wasn’t room for everybody, so tickets were distributed two days earlier. I stood in line for three hours and they ran out of tickets, but somebody who had an extra ticket gave me one the next day, so I was able to attend.

On the day of the assembly, I stood in line for an hour and a half and waited several more hours inside. The regular assembly began, with the normal FFA activities, with the National FFA Chorus and National FFA band (including my son) performing. The Secret Service agents were there already.

There was a break in the action on stage, during which, as in Trump rallies, the waiting increases the suspense. At one point, an agent affixed the presidential seal to the podium.

Eventually, Secretary of Agriculture Sonny Perdue appeared on stage and spoke briefly. Then there was more waiting.

Finally Trump came out, with the signature  tune “I’m Proud to be an American” playing.

A number of the chorus kids, and band kids were able to shake his hand (my son was in the middle of the band and wasn’t able to quite get to where Trump was).

Trump began a speech which lasted over an hour.

One might ask – “What does a New York City billionaire have to talk about with a bunch of agricultural folks?”

Quite a lot actually. Trump was going strong for over an hour and was well-received by the audience.

You can watch a video here, the transcript is here and here is a local article.

The speech was the same day as the Pittsburgh shooting, which had occurred that morning. Right after his speech began, Trump began talking about it, and it’s clear that he was distressed about the shooting. Shame on the Trump-bashers who have sought to blame Trump for this shooting.

But the President did more than just talk about it himself. Trump suddently said that while traveling on Air Force One on his way to speak, it had occurred to him to invite a rabbi and a Christian pastor to deliver prayers for the Pittsburgh situation.

Then a rabbi (Benjamin Sendrow) and an evangelical pastor (Thom O’Leary) came out on stage with Trump.

O’Leary prayed first, concluding his prayer in Jesus’ name, after which the rabbi immediately shook his hand and then delivered his own prayer.

I guess this is something that the Trump-bashers and “Never Trumpers” just don’t get or just don’t like about Trump, his respect for and connection with Middle American religious people.

(Thom O’Leary is a pastor in California, and was there at the convention along with his son Luke. At the end of that session, after Trump spoke, the younger O’Leary was named National FFA President.)

Trump talked a lot about agricultural trade policy in the speech, a quite relevant topic for the venue.

After they spoke, Trump told the audience:

Trump displayed some self-effacing humor, joking about his hair and several times intentionally revealing his ignorance of various aspects of agriculture. Especially here, when discussing the new trade deal with Canada:

Canada also agreed to give fair treatment to our wheat farmers, and they will now grade American wheat just like they grade their own wheat. Now, you people know what that means. I don't know what the hell it means, but I heard it was a big concession. I have no idea. I have no idea what that means. But everybody is saying, "Sir, could you get the wheat graded the same way they grade their wheat?" And I said, "All right, whatever the hell it means, we got it, okay?" That was supposed to be a big deal.

The president was well-received by the audience and his speech was a big hit. It won’t be soon forgotten by those in the audience.

There’s another detail, but you have to know the history of FFA to appreciate it.

The original name of the organization was FFA, the initials for “Future Farmers of America”.

Thirty years ago, in 1988, in a misguided attempt at “inclusion”, the organization renamed itself

Supposedly the initials FFA now mean nothing. But how can you say that the longstanding initials of an organization suddenly mean nothing? That’s ridiculous.

The good news is Trump didn’t get the memo. Thirty years after the organization’s misguided name-change, Trump was still calling them “future farmers” and “Future Farmers of America”.

The speech never mentioned immigration but then, Trump’s views on that subject are well known.

Trump did, however, acknowledge the importance of agriculture in the historical American nation:

No one embodies the American spirit like the members of the FFA and, frankly, all of the people that are in this room with us today. And our nation, if you know, was founded by farmers. In fact, if you look—chain of command—if you look, President, Vice President—I don't know exactly where the Secretary of Agriculture is, but it's right up there at the top, because we really were about farming, and we still are about farming….Our independence was won by farmers. Our frontier was settled by farmers. And, every day, our people are fed, clothed and sustained by American farmers.

The president’s speech at the FFA convention was a triumph. It displayed once again Trump’s uncanny ability to make a heartfelt connection with Middle America and the historical American nation that demographic represents.