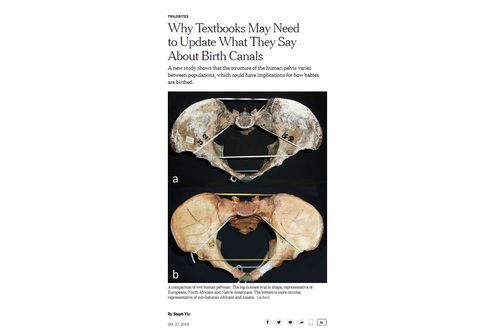 Birthing Babies By Race—Pelvic Structure Is Not A Social Construct

A new study shows that the structure of the human pelvis varies between populations [races], which could have implications for how babies are birthed.

… But such characterizations have long been based on anatomical studies of people of European descent. In reality, the structure of the pelvic canal, the bony structure through which most of us enter the world, varies tremendously between populations, according to a new study in Proceedings of the Royal Society B.

These contribute to the risk of pregnancy-related deaths being three to four times higher for black women than for white women.

Limited prescriptions of what constitutes a “normal” pelvis or birthing process might lead doctors to perform unnecessary interventions — like induced labor, cesarean sections or the use of forceps — which can further exacerbate harm, said Lia Betti, an anthropologist at the University of Roehampton in London, and the study’s lead author.

“What worries me is that doctors come out of school thinking of the European model of the pelvis,” Dr. Betti said. In the early 1900s, this led to “horrific situations” in which American doctors used forceps on black mothers, trying to force babies to align with “the rotation pattern for a European classical pelvis,” she added. …

They found that pelvic shape varied enormously, even more than measures of leg, arm and general body proportion that are known to vary significantly between populations. That was “remarkable and unexpected,” the researchers wrote.

Mostly, they found, pelvic shape varied along lines of geographic ancestry. People of sub-Saharan origin generally had the deepest pelvises back-to-front, while Native Americans had the widest side-to-side. Europeans, North Africans and Asians fell in the middle of the range.

My guess would be that sub-Saharan pelvis shapes are conducive to an efficient running stride, which ties into their impressive record in Olympic running races. But they do seem to cause more trouble for gestation and birth. It would also be interesting to study how adult children’s head shapes and head sizes are related to differences in mothers’ birth canal.

In the comments, various doctors, nurses, and midwives mention that instruction in racial differences were a normal part of training, at least in the past:

What textbooks was the author consulting? I guess I’m showing my age, but it has been long known in obstetrical circles that pelvic types differ among populations.

But of course, most women have some variant/combination of the above.