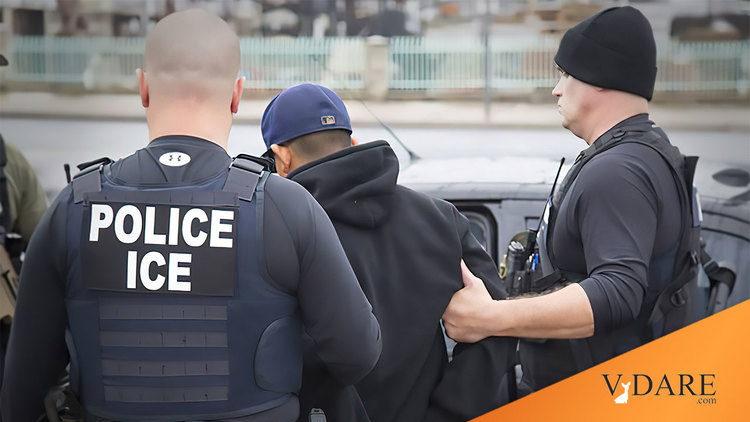 Another Biden Regime Administrative Amnesty has dropped. This time it‘s bringing lawfully deported illegal aliens back to the United States, at government expense, and giving those illegals three-year work permits, welfare, Social Security cards, and driver’s licenses, all in anticipation of those illegal aliens being given a huge cash award for entering the United States illegally through a settlement of their lawsuit that falsely claimed they were deported illegally.

The final reward will be for those illegal aliens to be awarded Green Cards.

This is an outgrowth of the attempt by the Biden Regime to reward previously deported illegal aliens with entry to the United States, employment authorization, and other benefits through a stage-managed settlement of their baseless lawsuit challenging their deportation, along with millions of dollars for each alien deported. The original plan was to sneak this settlement through, but it got into the press and the Biden Regime backed off the proposed settlement that would reward illegal aliens for entering the United States illegally.

With their plans thwarted, the Biden Regime just created a new program for these illegal aliens, minus the settlement money, but all expenses are on the American people for travel and welfare. And the eventual settlement of the case despite the previous uproar.

Most of the parents had been deported while their children remained in the U.S. Now the parents can come to the U.S. and live and work legally for three years.

The Biden administration has reunited 400 children with their parents after they were separated as migrants crossing the southern border under the Trump administration, said Michelle Brané, the executive director of the Family Reunification Task Force.

More than 5,000 families were separated under Trump’s 2018 “zero tolerance” policy and a 2017 pilot program and advocates estimate over 1,000 remain separated. Because the Trump administration did not keep records of which children were separated and where they were sent, the task force and lawyers working on behalf of separated families have had a difficult time identifying families to offer them the chance of reunification.

And all paid for by the Americans being displaced and replaced by those illegal aliens.

In the majority of recently reunited cases, Brané said, the parents were deported while the children remained in the U.S. Now, parents are given the opportunity to come to the U.S. on paid travel, bring other members of their family who are dependent on them, and live and work in the U.S. legally for three years.

The plan remains for these illegal aliens to be rewarded with Lawful Permanent Residence, sometime in the future.

Lawyers for the families have advocated for legal permanent status on behalf of separated families, but so far the Biden administration has not agreed to that provision.

It includes extensive benefits, such as counseling for illegally entering the United States.

Brané said the reunification also includes mental health services for families both before and after reunification. She said many of the families have suffered from profound mental health issues after their separation and counseling is often needed before they reunify.

There is no explanation why the minors were kept in the United States, since they clearly were not “unaccompanied minors” suffering from abuse or abandonment, and therefore legally allowed to remain. In fact, the minors should have been deported with their parents, or missing that opportunity to be deported together, the minors could have been easily deported to the nation where their parents had been previously deported. However, I blame the Deep State saboteur Kirstjen Nielsen for the failure to see that these minors were correctly classified and expeditiously deported with their parents. It was almost as if Nielsen caused the problem she failed to fix, and deliberately so.

The solution now will have to be legislative. The new Republican Congress must end this amnesty, and others, with riders to spending bills, ordering all aliens who entered the United States illegally to be removed and prohibit any grant of employment authorization, any monies, or Lawful Permanent Residence.