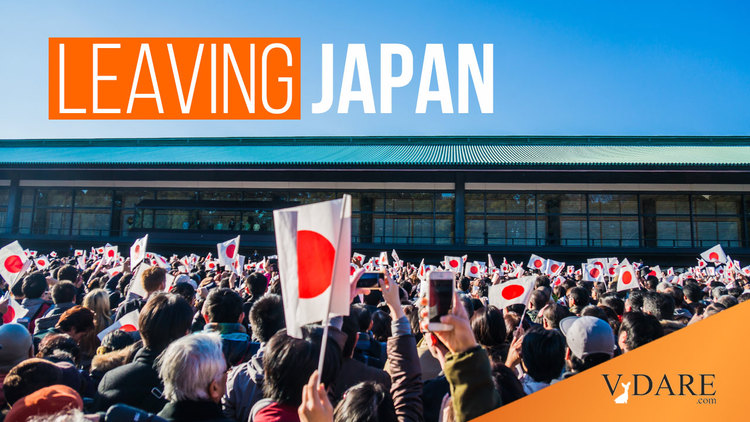 Globalist expatriates, those who have rejected the nation of Japan, are seeking, again, to overturn Japan’s commitment to being a nation of blood and soil. The globalists have always been enraged that Japan is a nation guided by the principle that a people making up a nation are unique and transmit that uniqueness through blood, language, culture, and community. Consequently Japan takes citizenship seriously.

In Japan, there are no accidental citizens created by an incidental birth within the territory of Japan, nor are there any citizens not Japanese by blood. And, as for naturalization, that is extraordinarily rare. The Japanese firmly believe that only people who are Japanese can produce a Japanese person and citizen. It is inherent in the Japanese concept of nationhood and obligation to the nation, family, community, and colleagues. The Japanese all serve each other, serve those above them, especially the Emperor, executing their duty to him in their daily lives, always aware of their obligations.

Therefore Japan outlaws dual citizenship. In Japan, one cannot serve two masters, for one will learn to love one over the other, and the Japanese realize this wisdom. Therefore, unlike most nations that allow an infinite number of citizenships and are despised by those who do so, Japan prohibits such folly by statute. But the globalist elite has recruited former Japanese citizens, again, to challenge the fundamental Japanese nationality law, a law going back to the Restoration of Imperial Rule in 1868. Even then the Japanese were cognizant of unhealthy innovation, and sought to prevent such infection.

A Japanese-born American said Thursday she has filed a lawsuit with a Japanese court claiming that the country’s nationality law, which bans its citizens from also holding a foreign nationality, violates the Constitution.

Yuri Kondo, 75, who currently lives in Fukuoka in southwestern Japan and filed the lawsuit at the Fukuoka District Court, said at a press conference with her legal team that acquiring U.S. citizenship should not have automatically stripped her of her Japanese one.

Previous attempts have been slapped down by Japanese courts, as there is a societal consensus that having a Japanese citizenship is a privilege based on being Japanese, and those who consciously reject their Japaneseness are no longer part of the community. More important, by taking an oath of allegiance to a foreign state, that person expatriates herself by rejecting the Emperor who rules over the Land of the Gods. Similarly, under the Tokugawa Shogunate, it was enough for a Japanese to leave Japan to be expatriated, as what person could be trusted to be a loyal member of the community of Japan if they left, rejecting hearth and home? And the penalty for returning was death.

And wise were the Tokugawa, as our Yuri Kondo casually took American citizenship. Despite taking an oath renouncing her previous citizenship and loyalty, Kondo retained her Japaneseness, even returning to live in the nation of her birth. Would anyone trust someone who once foreswore her loyalty to one nation, then returned to that nation, claiming that she had a right to remain Japanese? Of course not. And the Japanese rightly reject this casual taking and shedding of citizenship and culture. Kondo was a globalist functionary when it suited her, but now wants what she once renounced.

And it seems that such momentous acts by some disloyal Japanese are very selfish, not a personality trait appreciated in Japan.

One former Japanese subject was so pecuniary that he took Swiss citizenship solely for financial gain for his business.

Hitoshi Nogawa, 76, a businessperson from Switzerland, is one of eight plaintiffs who have filed a suit against the Japanese government arguing that “depriving people who obtained foreign nationality of Japanese citizenship against their will is a violation of the Constitution, which guarantees the right to pursue happiness and other privileges…”

Born in Kanagawa Prefecture, south of Tokyo, Nogawa moved to Switzerland in his 20s and established a trading company. In order to bid on a public works project, he needed Swiss citizenship, which he obtained in 2001. He did not encounter any trouble until 2013, when he was told by the Japanese Embassy there, “If you don’t choose one (nationality), it’s going to be a problem.”

The request is based on the Nationality Act, which stipulates that people who acquire foreign citizenship lose their Japanese nationality, and requires them to submit a citizenship renunciation notification.

For Nogawa, giving up his Swiss nationality would have posed a problem for his work and discarding his Japanese citizenship would have meant losing his identity.

Not unsurprisingly, those who have expatriated admit that they remain to their core Japanese, as few can easily reject their origins and blood: they remain Japanese.

Nogawa, who effectively lost his Japanese citizenship for acquiring Swiss nationality, said, “I identify as Japanese, but it feels like I’ve become half a person. I feel bad for my ancestors and, in the current situation, I don’t plan on being buried with them.”

This suggests that there is a fundamental problem with the concept that one can truly become part of another people. Hitoshi Nogawa has realized this. He was always Japanese, he could no more become Swiss than a man become a woman, no more than a dog can become a cat. Citizenship, nationality, race, and community are part of one’s blood and upbringing. Imagine thinking, acting, and interacting in Japan as part of Japanese culture, then going to Switzerland and thinking that one could become Swiss. That is not possible, as Nogawa admits. His Swiss passport was nothing more than a document of convenience for him and his company, as it is with all such peoples, especially those as different as Swiss and Japanese. While both are mountainous and inhabited by a hard-working people, their cultures and experiences are quite different.

So it is with America, perhaps because we have a national parentage descendant from the British diaspora and conquest, as are our institutions and language. Those of other heritages can become useful citizens if closely related by blood, language, and culture, but for those so foreign, like Yuri Kondo, that cannot happen, as she herself realized, and then returned home. Kondo never became not-Japanese, nor was she ever American in any real measure. Learning English, passing a 10-question citizenship test, none of that makes one American. Born to Americans, being raised here by Americans, passing on our culture, language, shared assumptions and beliefs, that is American, and the Japanese can be nothing more or less than Japanese. It is in the blood.

The Japanese realize that and only those of Japanese blood can be Japanese, but expatriating oneself is a rejection of being Japanese. For the Japanese, a society so strongly based on social cohesion and interlocking obligations up, down, and across society and family, it is inconceivable that such action could be acceptable to society as a whole.

The Japanese have made a decision that Japaneseness comes through blood and descent; the globalists reject that and work relentlessly to destroy that sense of nationhood and community. This lawsuit is just another attempt by the global elite to destroy Japan. It is sad that Kondo and Nogawa made a bad decision early in their lives, not realizing that they were not and could never be anything other than Japanese.

Similarly, outsiders like Naomi Osaka can never be Japanese, and most Japanese don’t consider her really to be Japanese. For her, the Japanese passport was just a ticket for Olympic glory—such a pitiful act for an Olympic games that was a bust. But, as a global elitist, it is good to see that she will never be an American citizen again, as she never was a true American, since both her parents were aliens, raised in alien cultures of disloyalty and black anger. Sadly, she is Japan’s problem now. I would not wish an angry black woman on anyone.