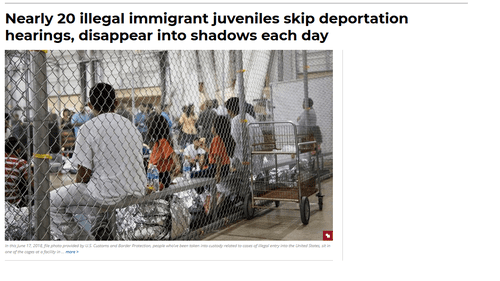 Anarcho-Tyranny: Illegals Skip Court Dates, Government Has No Idea Where They Are

Don't make a mistake on your tax forms! Don't violate one of the thousands of complicated regulations that apply to businss owners. Just to be on the safe side, don't talk to any Russians, as that might be illegal now.

But if you're an illegal immigrant, you don't have to do a blessed thing.

On any given day, nearly 20 illegal immigrant children skip their deportation hearings and disappear into the shadows, the Trump administration said Thursday, putting contours on the difficulty the government faces in trying to stop the flow and protect the children.

More than 200,000 of the juveniles — known in government speak as Unaccompanied Alien Children, or UAC — have been released into communities in recent years and remain there, many of them ignoring deportation orders and others awaiting a judge’s ruling.

Yet top senators say many of them are “lost,” with the federal government having no clue where they are, how to deport them, or even whether they’re being abused.

“Shocking,” said Sen. Rob Portman, Ohio Republican and chairman of the Senate’s Permanent Subcommittee on Investigations, which is probing the matter.

This is one of the major unspoken issues regarding immigration policy. Whatever the laws on the books, even the most basic regulations go completely unobserved right now. Thus, when you hear Congresscritters assuring you that illegals will have to jump through certain regulatory hoops in order to get citizenship or legal status, you shouldn't believe them. The regulations they are supposed to obey now don't apply.

Before any changes to immigration policy can even be discussed, the government needs to regain control over our own borders and be able to track who is coming into and out of the country. This is more important than any war Americans are fighting overseas.

"The rule of law?" No such thing exists in America. We've got anarcho-tyranny, and it's going to get worse before it gets better.