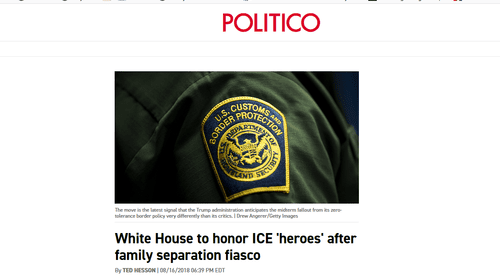 [Show Your Support For ICE By Getting Your "ICE Is Nice!" Stickers Today]

The Opposition Party in the media is very upset.

The Trump White House is planning an event next week to honor federal immigration agents — even as more than 500 migrant children remain separated from their parents after being separated at the border.

The “Salute to the Heroes of the Immigration and Customs Enforcement and Customs [and] Border Protection" is scheduled for Aug. 20 in the East Room, an administration official confirmed, in the latest signal that the Trump administration anticipates the midterm fallout from its zero-tolerance border policy very differently from its critics.

The Republican Party seems to be paralyzed with fright as the midterm elections near. Only the White House seems to have some idea of what battleground they need to be fighting on. Defending Immigration and Customs Enforcement (ICE) is common sense. President Trump gets this; why doesn't the GOP?

As Paul Starr writes in the left-wing magazine The American Prospect:

Trump and other Republicans have seized on “Abolish ICE” for obvious reasons: The slogan seems to confirm Trump’s accusations that Democrats favor “open borders” and are “weak” on border security. As a result, instead of Republicans having a lot of awkward explaining to do, Democratic candidates all over the country are now being forced to explain where they stand on ICE—always a slippery matter—and nearly all candidates in competitive races are skating away from the idea of abolishing the agency...

Sean McElwee, who created the #abolishICE hashtag, is a political strategist and public opinion analyst who has rightly emphasized that many progressive causes have wider public support than is usually acknowledged. Drawing on a recent poll his group Data for Progress conducted, he points, for example, to the idea of a “public option” for internet access, which had net 39 percent support (56 percent in favor, 16 percent against), with a lot of that support coming from rural areas. That’s an idea that could help Democrats expand their base.

But, despite being the initiator of “Abolish ICE,” McElwee doesn’t mention it among the progressive issues with net support, and for good reason. A Politico/Morning Consult poll in July found only 25 percent of voters agreeing that ICE should be abolished, with 54 percent in favor of keeping it. A HuffPost/YouGov poll also found a 2-to-1 margin against abolishing ICE.