America's Senator Sessions: Congress Must Not Give Obama Money to Undermine the Nation

On Friday, Jeff Sessions exhorted his colleagues in the Senate to use the Constitutional powers of Congress, even urging them to stop hiding under their desks.

Senator Sessions held the Immigration and Nationality Act while he spoke on the floor. 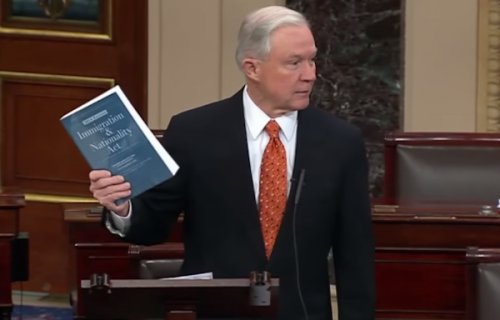 The GOP members apparently need a reminder that they can and must stand up against the dictatorial president. You get the feeling Sessions is frustrated with the lack of resolve in an institution that has a lot more power available to it for use, but the new ruling party, which was elected to oppose Obama, remains somnolent.

Republican Senators, the hour is late. Listen to the best man among you.

SESSIONS: Is there any country in the world that says its appropriate for a business to hire somebody who entered their country unlawfully? What kind of logic can support such a reasoning? For the President is not an imperial master. The Congress of the United States is not helpless when it confronts the President.

Colleagues, weve got to get out from under our desk here! Are you afraid to say to the President of the United States we dont agree with this and were not going to fund this? Is that the world were in? Are we hiding under our desks, that the President may go on television and attack us? Because we wont agree with his ideas? Surely not. Surely not.

Were going to continue to work to improve immigration law and make it better and serve the national interest of the United States, not special interests, not activist groups and not big businesses, but the average working Americans interest.