Following the mass slaughter in Paris of Charlie Hebdo journalists and artists, huge crowds and world leaders assembled in the city to express condemnation of the murders that were committed to shut down free speech in France. 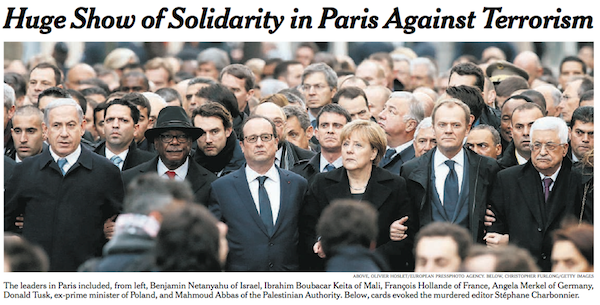 However, the generally tough talk in defense of free speech tends to disappear in specific instances when people dont want to be murdered in their office by some jihad-crazed Muslim immigrants.

The topic of attacks against free speech was a theme in a recent SunTV segment of JihadWatch between Michael Coren and Robert Spencer. Jihadists are determined to end Western criticism of Islam, aka blasphemy which can be punished by death according to Muslim scriptures.

COREN: These issues dont direct involve terrorism, its not always the issue of terrorism, its our freedom of speech being eroded and decayed. Artwork violating Islamic blasphemy law removed from a Paris exhibition this is not Egypt or Syria or Iraq or Saudi Arabia; this is France, the home of art, avant garde, expressionism, breaking artistic barriers. Theyve changed their policy because theyre frightened of what some Muslims might say?

SPENCER: Well, theyre afraid of what some Muslims might do, Michael, what theyre afraid of is that Islamic jihadis might strike them the way they struck at Charlie Hebdo. So what you have here is a victory of terrorism. The terrorists wanted France and the rest of the free world to conform to Islamic blasphemy law, and they showed that they are willing to kill to make that happen, and in response all too many Western institutions and activities like this one are curtailing their acts and conforming to Islamic blasphemy laws to avoid suffering the same fate. It is a collapse of courage on a massive scale.

COREN: What sort of artworks were so offensive?

SPENCER: There was an artwork of a woman who was stepping on a prayer mat with shoes and this is not allowed, shoes when you go into a mosque, and so this is considered to be so possibly disrespectful and inflammatory to Muslims that it was voluntarily removed by the people running the exhibit.

Winning through intimidation thats the Islam strategy. And it works because people know violence will follow if intimidation alone doesnt do the trick.

Why does America continue to admit Muslim immigrants? Cant we learn from Europes catastrophe? Its foolish to think that we Americans do assimilation better: when the number of Muslims increase to similar percentages as occur in European cities, then the same violent social chaos will erupt.