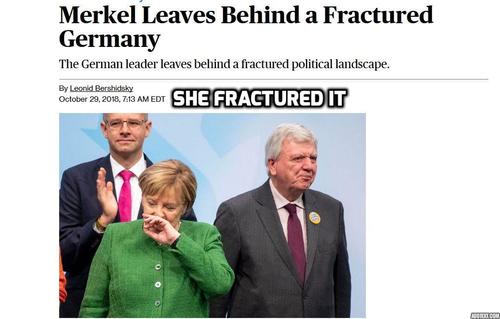 If the supreme function of statesmanship is to provide against "preventable evils," as Enoch Powell said,  Angela Merkel must go down as one of the worst leaders of all time. "Merkel's Boner," as Steve Sailer calls the German chancellor's decision to open Europe's borders, has led to the wholesale transformation of not just German, but European politics.

In the most recent elections in the German state of Hesse, Angela Merkel's coalition suffered heavy losses and there is now talk of the SPD (the Social Democrats) breaking from Merkel's "Grand Coalition." The radical left, as exemplified by the Green Party, is in the ascendency. The Alternative for Germany (AfD), an immigration patriot party, also won representation in Hesse for the first time.

[Mekel's] centre-right CDU party and the centre-left SPD were each 10% down on the previous election in Hesse state.

She told reporters the state of the government was "unacceptable".

The federal government must find a "reasonable way of working", after what looks to be the SPD's worst result in the western state since 1946.

The CDU must agree to a "clear, binding roadmap" ahead of a scheduled coalition review next year. "Then we'll be able to check whether this government is still the right place for us," she said.

The hallmark of Merkel's politics has been "stability." This is precisely why the German people have been returning the centrist leader to power again and again and again. Her vision of a European order defined by moderate capitalism ameliorated by a welfare state and held together by German fiscal discipline and productivity is, whatever we may think about it, appealing to a vast swath of the German people.

In some ways, it is "post-political." The German government under Merkel has been fanatically hostile to the "extreme" Right, shutting it down with naked displays of political force. At the same time, the extreme Left was rendered almost irrelevant, at least on economic issues. Germans frightened of talk about "nationalism" but skeptical of the extreme Left welcomed Merkel's vision. And modern Germany is unquestionably one of the most prosperous, successful nations in the world.

Or at least was. Merkel, evidently with no thought to the consequences, introduced massive instability into Germany by welcoming the flood of migrants. Merkel has now announced she is leaving in 2021, making her a long-term lame duck. No one knows what will follow her, or whether the European experiment will even survive. By her own standards, she must be considered a failure.

The growing demands for change, however, are not going to be satisfied with mere personnel moves, even such momentous ones as Merkel’s gradual easing out of power (she has said she believes in keeping party leadership and chancellorship in the same pair of hands). No successor, be it Merkel’s hand-picked CDU secretary general, Annegret Kramp-Karrenbauer, conservative Health Minister Jens Spahn, harsh Merkel critic and former CDU faction head Friedrich Merz or any of the CDU’s successful state minister presidents, will have an easy time winning a broader popular mandate than Merkel when the traditional parties of the center-right and center-left are in institutional decline. The public knows what they can offer and finds it irritatingly boring...

What voters are looking for is new ideas, clear views, a focus on their day-to-day problems rather than inter- and intraparty strife. The Greens’ gains with their friendly, non-confrontational approachability point to one potential winning strategy, though it’s certainly easier to be friendly and non-confrontational when not in the hot seat. On the other hand, the AfD’s unapologetic nativism is clearly another way to win votes. The growing polarization and dispersion aren’t good for big parties in general, even with highly capable, talented leaders. That’s why the current crisis is hardly likely to lead to the emergence of larger-than-life, Merkel-like figures able to unite the country. The big-tent parties’ monopoly on power can hardly be saved; Germany’s immediate future appears to be somewhat like many other European countries’ – a shifting electoral landscape, unstable governments, attempts at trial and error that lead to deadlock.

That’s not bad in itself: Radical change never leads immediately to stable outcomes. It’s ironic, though, that Merkel, this century’s greatest master of compromise, is leaving behind a landscape in which compromises will be even more necessary than during her reign.

Bloomberg of course sees the "unapologetic nativism" of the AfD as the real problem. Big business has no problem coming to term with the Greens.

Still, the growth of a real German Right can't be wished away by journalists. After the most recent elections in Hesse, the Alternative for Germany is now one of Germany's few real national parties.

Germany's party Alternative for Germany has attained all its election goals during the vote to the regional parliament (landtag) of Germany’s federal state of Hesse, AfD co-chair Joerg Meuthen said on Monday.

"We have achieved all our electoral goals. We wanted to achieve a two-digit result, and we succeeded. This is more than a threefold increase in votes in our favor compared to the elections of 2013, when we had 4.1 percent. Now we have 13.1 percent," Meuthen told reporters...

Meuthen stressed that AfD members were elected to the landtags of all 16 federal states of Germany, as well as to the Bundestag and European Parliament.

The rise of the Greens should not be underestimated. As the German state continues to repress patriots, the radical Left is well placed to capitalize on the discontent Merkel leaves behind. However, note what issues were important to the electorate in Hesse, according to a survey cited by Sputnik.

A recent survey by ZDF showed that the crumbling infrastructure of schools and lack of teachers were the biggest concerns for voters in the well-off state of Hesse, with 40 percent indicating education as their top priority. Migration was important to 29 percent of respondents, followed by infrastructure and housing with 22 and 21 percent, respectively.

Immigration has a way of overcoming all other issues, from transportation to schools to health care. And as the AfD seems to be the only party willing to directly confront the issue, the AfD is likely to grow in importance. The only question is whether the party can produce the leadership and discipline required to hang together in the face of a never-ending media onslaught.