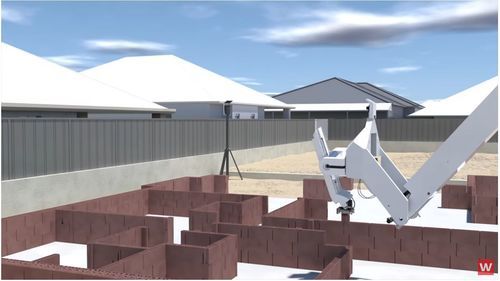 Unskilled Illegal Aliens Won’t Be Needed For Bricklaying Because Automation

Presumably some of the Honduran caravansters headed north to invade America have construction skills and may think they can make a pile of Yankee dollars working in the building trades.

That expectation would not be unreasonable, since CIS reported in 2013 that only 66 percent of US construction workers were Americans.

However, the window of humans working cheap appears to be shrinking because of the rapidly growing technologies of computers, robots and automation.

One traditional construction skill is bricklaying, but machines are coming that can accomplish that task cheaper and faster.

Remember, that in this job category along with many others, humans will no longer be needed in the future. Therefore:

Below, the SAM Semi Automated Mason, which is another brand of machine bricklayer.

I reported on bricklaying machines in 2015 when the Hadrian machine was being showcased. Now that company is partnering up with the Wienerberger, the world’s largest clay block manufacturer. So the bricks and machines will be designed to complement each other and be very efficient.

Building materials giant Wienerberger has teamed up with an Australian robotics company to develop a bricklaying robot.

The Hadrian X construction robot has been devised in partnership with Fastbrick Robotics and will lay clay blocks specially manufactured by Wienerberger.

The companies plan to run a pilot project in Europe before the new blocks are launched in Wienerberger’s market together with the Hadrian X machine.

Hadrian X has been developed for outdoor work and uses special technology to compensate for movements caused by wind, vibrations or counter-movements in real time. (Continues)