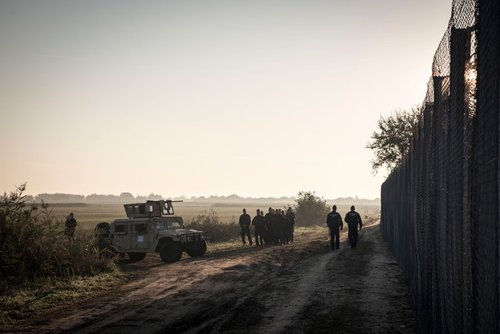 BRUSSELS — Even as three more countries followed Germany in introducing border checks to control a flood of migrants, the European Union on Monday failed to agree on a modest plan that would force individual countries to take in a share of some of the hundreds of thousands now seeking asylum in Europe.

Gathering in Brussels for an emergency meeting, interior ministers from across Europe agreed to share 40,000 migrants sheltering in Greece and Italy, but only on a voluntary basis, a watered-down version of a plan announced in May.

But as the fractious meeting stretched into the evening, there seemed little prospect that ministers would endorse a new plan put forward last week by Jean-Claude Juncker, president of the European Commission, for a program of resettlement for a further 120,000 asylum seekers that would be compulsory for member countries.

German and European Union leaders have called for European countries to share the burden of absorbing the hundreds of thousands of migrants who have poured into the continent this summer.

Discussions will not resume until next month, a blow to Mr. Juncker, who last week pleaded for “immediate action.”

In a sign of the disharmony caused by Europe’s worst humanitarian crisis since World War II, ministers did not to issue a joint final statement as is customary and left Luxembourg to issue a summary of the discussions in its own name.

The rancorous haggling in Brussels over the distribution of 160,000 migrants — a small part of the total — played out as Austria, Slovakia and the Netherlands introduced border controls on Monday, following a decision by Germany on Sunday to set up checks on its own southwestern frontier and halt train traffic with Austria.

The reintroduction of border controls, described as a temporary measure to restore order to an often chaotic flow of migrants, was the most serious challenge in years to Europe’s cherished system of passport-free travel across much of the Continent.

The 26 European countries that are party to the so-called Schengen Agreement, a cornerstone of European integration that enshrines open borders but also allows for temporary controls for security reasons, have in the past periodically reinstated checks but never because of pressures from migration. …

In Hungary, the authorities said that a near-record 5,353 migrants had crossed into the country from Serbia before noon on Monday — even as Budapest continued to try to seal off that border, which is being reinforced with the construction of a 109-mile fence topped with razor wire. …

The border measures raised pressure on participants at the emergency meeting in Brussels to close the deep fissures that have opened up among European nations over how to handle the migrant crisis. A further note of urgency came with an appeal in Brussels made by the aunt of Aylan Kurdi, the 3-year-old Syrian boy whose body washed up on a beach in Turkey this month. Photographs of the dead child shocked European public opinion and helped set off an outpouring of sympathy for migrants.

The feelz were great from all those Likes on Facebook, but now the hangover has set in and realization of what a disaster a few European politicians have inflicted upon the Continent.

… All the same, ministers from several East and Central European countries remained steadfast in their opposition to the compulsory distribution of migrants proposed last week by Mr. Juncker.

“This proposal is not solving the problem,” said Robert Kalinak, the Slovak interior minister. The Czech Republic, Hungary, Romania and the Baltic States have all voiced deep reservations about taking in refugees, arguing that they have no tradition of offering refuge to people of different cultures; that their economies cannot sustain the influx; and that most of the migrants want to live in richer and more welcoming places like Germany and Scandinavia.

In a dig at former Communist countries in the East that have said they will take only Christian refugees, Mr. Asselborn, the Luxembourg minister who ran Monday’s meeting, said that even his own country, the European Union’s smallest, “could take in a few hundred people who are not necessarily Christians, who have a different skin color, and that should be able to work in big countries like Poland or the Czech Republic or in Slovakia.”

Luxembourg is a tax haven with the second highest GDP per capita in the world, $93k, behind only Qatar at $144k. By the way, did I mention that moving the 2022 World Cup that was corruptly assigned to Qatar could free up $200 billion for taking care of fellow Arabs? Let South Africa put the World Cup on again.

In an effort to win over opponents of the plan, Germany, France and other nations embraced some of the Eastern Europeans’ tough language, calling for tighter controls of Europe’s borders and firmer measures against migrants who fail to qualify as refugees, including their swift return to countries deemed safe.

The French interior minister Bernard Cazeneuve stressed that economic migrants needed to be separated from genuine refugees fleeing war or oppression. “There cannot be humanity without firmness and responsibility,” he told reporters.

Ministers endorsed plans to increase cooperation against smuggling and border violations with Turkey, which has become one of the major transit countries for migrants making their way to Europe. In a speech on Wednesday to the European Parliament, Mr. Juncker presented the migrant crisis as a test of Europe’s ability to take common action and asked that interior ministers move swiftly to endorse his relocation plan at their Monday meeting. Voicing doubts that a voluntary program would work, he said,: “This has to be done in a compulsory way.”

The European Commission did not include the remark in an official transcript of the speech, in what could be a sign of the strength of opposition to this initiative.

… While Berlin said the controls along the German-Austrian border were only a temporary emergency measure, the restrictions, a response to the strain on local communities, signaled that Chancellor Angela Merkel’s welcoming stance toward the migrants was encountering domestic resistance.

“There is no order, there is no system, and in a country governed by the rule of law, that is a cause for concern,” Horst Seehofer, the governor of Bavaria, a deeply conservative state in the south, said on Sunday.

Joachim Herrmann, the Bavarian interior minister, told a local television station, “We need better controls in general, because we have determined that in recent days, many of those on the move are really not refugees.”

The phrase “Merkle’s Boner” was once very well known in the U.S.

1908 was the peak season of the Dead Ball Era of baseball, with tremendous pennant races in both leagues. The most famous play in baseball history before the Babe Ruth Era might well be Merkle’s Boner, in which the New York Giants thought they had won a key game over the Chicago Cubs when, with the score tied, two outs in the bottom of the ninth, and runners on first and third, the winning run was singled home from third. But in the celebration, Fred Merkle, the youngest player in the league, forgot to run from first to second.

Cubs second baseman Johnny Evers, of Tinkers-to-Evers-to-Chance, noticed that Merkle hadn’t touched second and called for the ball. With celebrating fans swarming the field, Giant pitcher Ironman Joe McGinity intercepted the ball and threw it away into the crowd. Evers eventually tracked down the ball (or maybe got his hands on a different ball) and stepped on second, forcing out Merkle, and leaving the score tied in the most controversial rule interpretation of the era.

When the Giants and Cubs finished the season tied for first, the game was ordered replayed. In front of the biggest crowd thus far in baseball history, Mordecai “Three Finger” Brown outdueled Christy Mathewson. The Cubs went on to win the 1908 World Series, and they haven’t won one since.

Fred Merkle went on to a fine career, but the immense notoriety of his bonehead play was a great burden psychologically. He avoided having anything to do with the game for a quarter of a century after retiring, finally winning some peace of mind when he was greeted with a standing ovation at an old timer’s game in 1950.

The modern equivalent was Bill Buckner’s error in the 1986 World Series. Curb Your Enthusiasm crafted an episode in which a quarter of a century later Buckner finally earns absolution by deftly fielding a baby tossed from a burning high rise.