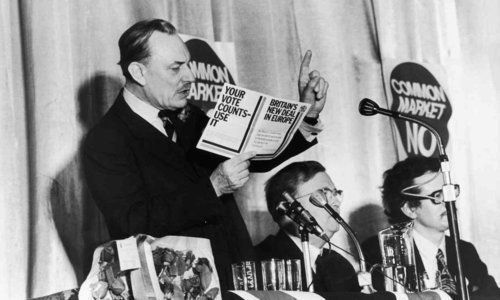 VDARE.com Editor Peter Brimelow has an eloquent post about this and VDARE.com has reposted the speech itself, with supporting hyperlinks brought up to date.

There are YouTube clips of Powell actually delivering bits of it, although apparently the entire thing was not recorded.

Here are the opening two sentences: 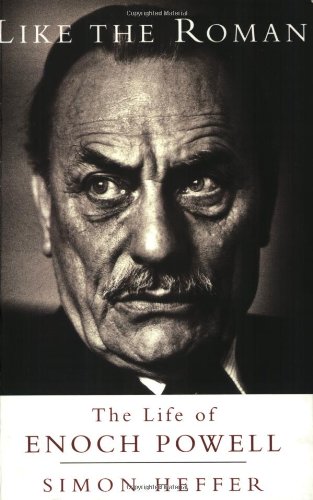 Powell's speech is commonly called "the Rivers of Blood speech," but that's a misnomer. There is only one river in it, the River Tiber on which Rome was built.

Near the end of the speech Powell said:

As I look ahead, I am filled with foreboding; like the Roman, I seem to see  "the River Tiber foaming with much blood."

That inner quote is from Book VI of the Aeneid. Aeneas, the hero of the epic, consults with the Cumaean Sybil, asking her what the future holds. The Sybil looks into her crystal ball and says the thing Powell famously quoted.

According to Powell's biographer, he first gave the quote in Latin, et Thybrim multo spumantem sanguine cerno, then translated it into English for the benefit of audience members who'd forgotten their Virgil.

Embarrassingly for Powell, who had been a Professor of Classics before he went into politics, the Cumaean Sybil was Greek, not Roman, so strictly speaking he should have said, "Like the Greek …" We Powell fans generally give him a pass on that. Virgil, who wrote the epic, was definitely a Roman, so the words Virgil put into the Sybil's mouth were his words by copyright.

That snippet of Latin aside, Powell's classicism shows through at several points in the speech. Here, for example, where he's enlarging on those obstacles that hinder human nature from dealing with preventable evils, quote:

Above all, people are disposed to mistake predicting troubles for causing troubles and even for desiring troubles: "If only," they love to think, "if only people wouldn't talk about it, it probably wouldn't happen."

Perhaps this habit goes back to the primitive belief that the word and the thing, the name and the object, are identical.

That last sentence there is straight out of Sir James Frazer's strange and fascinating book The Golden Bough, which a classicist of Powell's generation would certainly have read, and whose title is itself taken from an episode in the Aeneid.

For me, a math geek, the bit of Powell's speech I most often quote is:

Numbers are of the essence: The significance and consequences of an alien element introduced into a country or population are profoundly different according to whether that element is one per cent or 10 per cent.

Powell's biographer tells us he doubled down on that in an interview he gave to the Daily Mail after the speech:

Asked whether he was a racialist, he answered, "We are all racialists. Do I object to one colored person in this country? No. To a hundred? No. To a thousand? No. To a million? A query. To five million? Definitely."

There were two things at the front of Powell's mind when he prepared the "Rivers of Blood" speech. One of them was us—the Americans.

Powell and his wife had spent three weeks in the U.S.A. the previous Fall. We were at that point still in the throes of the Civil Rights movement, and events over here—America was convulsed with rioting in April, 1968—had given Powell much food for thought. There is a reference at the end of the speech:

That tragic and intractable phenomenon which we watch with horror on the other side of the Atlantic but which there is interwoven with the history and existence of the States itself, is coming upon us here by our own volition and our own neglect.

The other thing at the front of Powell's mind in April 1968: The Race Relations Bill of that year, which was at that time making its way through Parliament, and which would ban racial discrimination in private exchanges like property rentals.

Of this Powell said:

There could be no grosser misconception of the realities than is entertained by those who vociferously demand legislation as they call it "against discrimination" … They have got it exactly and diametrically wrong.

The discrimination and the deprivation, the sense of alarm and of resentment, lies not with the immigrant population but with those among whom they have come and are still coming.

Enoch Powell was a great man; a brilliant man, both literate and numerate, and a fine patriot. His speech isn't just for the Brits: Anyone of any nation can read it with profit. Nor was it just of its time: It is still pertinent today.