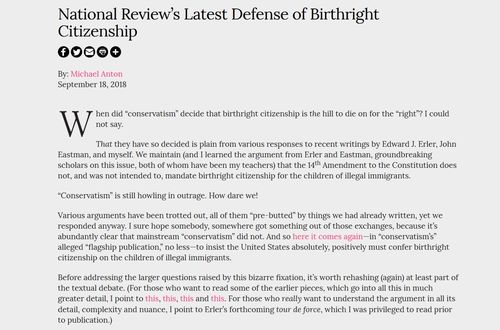 At the Claremont Review, Michael Anton takes note of the same National Review piece I blogged about recently. (See NRO Goes All In For The Right To Birthright Citiizenship—And Will Be Puzzled Again When Trump Wins.)

The NR piece is by a lawyer named Dan McLaughlin, who blogs as @baseballcrank.  [Constitutional Originalism Requires Birthright Citizenship, September 9, 2018]

Here's what Anton has to say:

When did “conservatism” decide that birthright citizenship is the hill to die on for the “right”? I could not say.

That they have so decided is plain from various responses to recent writings by Edward J. Erler, John Eastman, and myself. We maintain (and I learned the argument from Erler and Eastman, groundbreaking scholars on this issue, both of whom have been my teachers) that the 14th Amendment to the Constitution does not, and was not intended to, mandate birthright citizenship for the children of illegal immigrants.

“Conservatism” is still howling in outrage. How dare we!

Various arguments have been trotted out, all of them “pre-butted” by things we had already written, yet we responded anyway. I sure hope somebody, somewhere got something out of those exchanges, because it’s abundantly clear that mainstream “conservatism” did not. And so here it comes again—in “conservatism’s” alleged “flagship publication,” no less—to insist the United States absolutely, positively must confer birthright citizenship on the children of illegal immigrants. [More]

There's a lot of technical stuff about how National Review and Conservatism Inc. are wrong about this, but the more important part is why they want to be wrong about it.

One thing we can be absolutely sure that automatic birthright citizenship does not conserve is conservatism. America’s cities, counties, and states with the highest levels of illegal immigration are (or are among) the nation’s “bluest” and most liberal, where conservative ideas and political candidates hold no purchase. The correlation is so strong that it would be folly not to admit at least some causation. The “conservative” enthusiasm for illegal immigration thus amounts to a political and philosophic death wish.

One can already hear the “conservative” rejoinder: “We just have to do a better job of explaining our ideas.” They’ve been saying that for fifty years and getting nowhere. Meanwhile, the electoral and political climates continue to move inexorably away from them—us—yet all they can rouse themselves to do is defend to the death automatic birthright citizenship.

At any rate, this rejoinder is revealing. Conservatism of late has, as we have seen, not set for itself as its fundamental task to conserve the existing American nation, its ingenious form of government, its people, communities, traditions, and so on. It has rather taken up the quixotic task of persuading illegal immigrants and their children of the wisdom of supply side economics, enterprise zones, and school vouchers. Its repeated failure to make any headway at this self-appointed task has not chastened it in the least.

Read the whole thing. And remember we've been writing about this ourselves for almost twenty years now--see the tag on Birthright Citizenship Reform below.