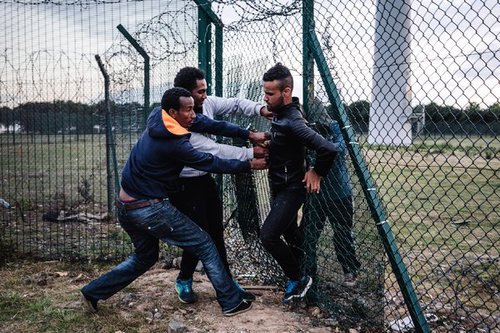 Africans Fleeing the Euro And Breaking Into The UK

CALAIS, France — … The desperate scene playing out each night and day in Calais, with migrants trying to vault fences or cut their way through them and climb onto trains or into trucks going across the Channel to England is just one chapter in a painful drama playing out across Europe.

For many of the migrants who have been coming to the Continent from Africa, the Middle East and beyond, Calais, a mere 21 miles from the white cliffs of Dover, is their last stop. If they make it across to Britain, many believe they will have reached safety and a better life. Some are attracted to Britain because they speak some English, others because they see better job prospects there than on the Continent. A few even cite a strong pound. 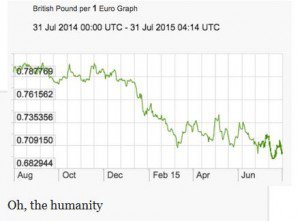 Erratic euros just won’t do. If the local currency isn’t sound as the pound, it’s not good enough for them.

Those who make it as far as this port city often express striking and implacable certainty about their right to go the rest of the way, having come so far.

The concept of the “refugee” has gotten inverted. It used to be that a refugee was somebody who would be happy to make it across just one border into a neighboring state. But now even France, with its drooping euro, isn’t good enough for Africans. It’s their right to live in London, and what kind of racist would you have to be to tell them no?

I mean, it’s not like there is a whole continent of people where they came from, right?