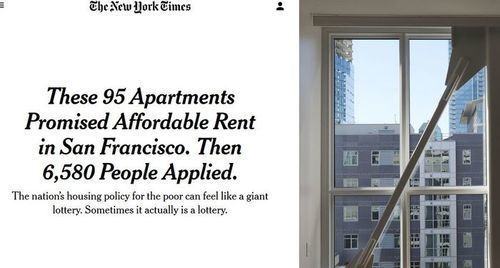 The New York Times gets around to pointing out something I used to talk about a lot:

The nation’s housing policy for the poor can feel like a giant lottery. Sometimes it actually is a lottery.

“Affordable Housing Policy” in 21st Century America typically doesn’t mean policies that increase the overall supply of housing, thus moderating housing costs for most buyers and renters. Instead, it often means increasing costs of new development by reserving a certain number of units in a big new luxury development and then holding a lottery in which a handful of lucky lower income winners are handed, in effect, hundreds of thousands or even millions of dollars while everybody else gets more or less nothing.

That’s how we Fight Inequality.

Similarly, Los Angeles has set aside a lot of money to Fight Homelessness by doing nice things for the Homeless. But nobody has quite explained, as far as I can tell, how providing accommodations to the Homeless is going to head off a flood of New Homeless into balmy Los Angeles from less climatically blessed parts of the country and world, especially if the government is going to put a roof over their heads for them.

My guess is that, eventually, some people will be declared Officially Homeless and thus eligible for various privileges and other people will be out of luck.

I suspect that will turn out to be a general trend: more and more people will attain various kinds of privileged status for themselves (and their descendants). All the TNC-type recent talk about White Privilege in FDR’s America, for instance, works to rationalize current and future identity-based privileges.

Left unchecked, human beings tend to develop convoluted systems of special rights and privileges. The now-fading modernist ideology of equal protection of the laws might perhaps be a hothouse flower that doesn’t flourish without constant care. One distinctive aspect of postmodern privileges is that they are justified in the name of equality, but the workings are not all that different from the premodern world.