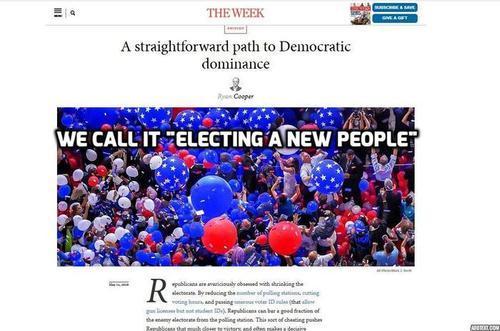 Leftist Ryan Cooper Echoes VDARE.com On Electing A New People—But He’s For It

After the 2014 Republican sweep of the midterms, VDARE mainstay James Kirkpatrick noted that there was a "brutal reality" behind the "GOP’s electoral strike against Obama’s Minority Occupation Government... a huge reliance on the white vote and enforcing laws against voter fraud, a reliance that will only increase in the elections to come. American elections are increasingly resembling a racial headcount."

Today, RealClearPolitics.com linked to a piece in The Week called, "A straightforward path to Democratic dominance." The five simple goals the author lists are:

All of these points are implicitly racial. Whites are monumentally more civically engaged than non-whites, so automatic registration and making voting easier would de facto increase non-white (Democratic Party) voting. As an aside: Registering to vote, and subsequently voting, are not difficult things to do at present. The fact that non-whites have a hard time of it is, in my view, a testament to their lower average cognitive abilities, relative to whites. By the author admitting that non-whites have a hard time of it now, is he giving into "the soft bigotry of low expectations"?

Washington DC and Puerto Rico are both majority non-white, which is why their local governments are always controlled by Democrats. Making them states would do for the Democratic's Electoral College count what the "free space" on a bingo sheet does. (Though, amusingly enough, Puerto Rico has voter ID laws in place.) Prisoners and ex-cons, as everyone knows, are disproportionately black and Hispanic, that is to say, Democratic voters. The majority of illegal immigrants are Hispanic, that is to say, Democratic voters.

The author of this piece, Ryan Cooper, is essentially just elaborating on various ways to get more non-white voters; hence the title of the piece, "A straightforward path to Democratic dominance." Cooper, like us, believes elections in America to be a racial headcount, it's just that he's playing for the other team. Here is James Kirkpatrick again, from the same 2014 article:

Of course, lost in all the talk about “voter suppression” and the need to represent non-citizens is the fact that allowing fraudulent votes and importing a new population effectively disenfranchises existing American citizens.

And consciously acting to dispossess Americans through mass immigration after they have democratically expressed their opposition is an abuse of power far more serious than anything done by the government of George III.

To actively ignore not just the will of the voters and consciously seek to “swamp” them is indistinguishable from the tactics of a foreign regime waging a war of conquest.

But then again—that’s the point.