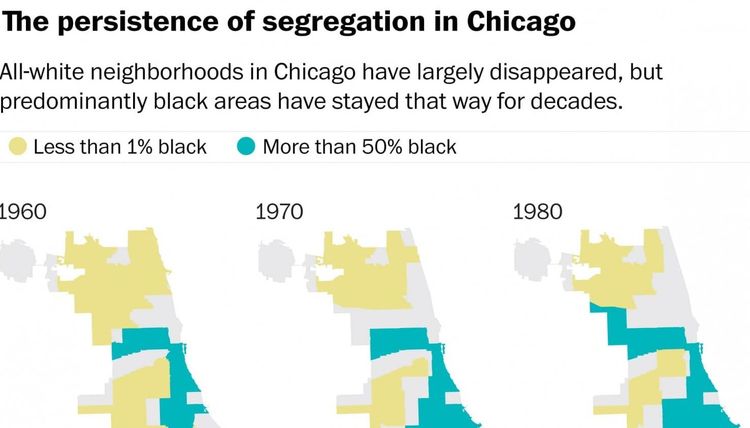 On "Segregation", Ta-Nehisi Coates Has Become the Intellectual Guru of the Obama Administration

Julian Castro, the former $20-per-day fake mayor of San Antonio promoted to Secretary of Housing and Urban Development, announced the Obama Administration’s new plan to move inner city poor people to your neighborhood on Wednesday in Chicago, a place I may have mentioned once or twice in discussing housing.

The Washington Post coordinated with the White House ahead of time to come up with an immense piece about how redlining in the distant past is the reason for the travails of blacks today:

Martin Luther King Jr. chose Chicago when, in 1966, he launched a campaign for “open housing” in northern cities where blacks had been restricted to slums. On Chicago’s South Side, their neighborhoods had been “redlined” by banks that refused to lend to black homebuyers. Restrictive covenants outside the ghetto barred blacks from moving in.

How can anything that happened in the last half century when liberals were running the race question in America have any influence on 2015? Haven’t you read today’s greatest public intellectual Ta-Nehisi Coates about the 1930s? Liberalism hasn’t failed, it just hasn’t yet been tried.

The Post put together a map proving that that white racism was still keeping the black down:

Okay, so there are almost no neighborhoods left in Chicago that aren’t at least 1% black. (By the way, that tiny new black-free neighborhood on the northwest side that emerged between 2000 and 2010 is very near where former Obama chief of staff and now mayor of Chicago Rahm Emanuel lives.)

The Austin neighborhood where my wife grew up is the left edge slightly north of the midline that changed rapidly from 1960 to 1980 (it’s now only 4% white). Whereas Oak Park, IL, where my father grew up is just to the left of Austin off the map and did not change rapidly due to city fathers imposing the black-a-block quota on real estate agents. The very liberal, very gay, quite white Oak Park is still 64% white.

Perhaps just to troll me, the New York Times explains:

Some local governments, like the Chicago suburb of Oak Park, have already created the kinds of fair housing plans the federal government will now require. Rob Breymaier, the executive director of the Oak Park Regional Housing Center, a nonprofit group that advocates “meaningful and lasting racial diversity,” said he hoped other communities would follow that example.

“This rule makes it clear that the fair housing obligation isn’t just being able to say, ‘I didn’t discriminate,’ ” Mr. Breymaier said. “It’s also saying, ‘I’m doing something proactively to promote an integrated or inclusive community.’ ”

In contrast to everybody knowing all about redlining in FDR’s day, the history of liberal control of housing from 1968 onward has disappeared down the memory hole. Fortunately, a liberal journalist named Alyssa Katz published a solid 2009 book, Our Lot, that documented the disastrous impact of liberal power on the Austin neighborhood in Chicago. I reviewed it in VDARE six years ago:

Our Lot: How Real Estate Came to Own Us by Alyssa Katz, a liberal journalist and NYU journalism professor who writes for Mother Jones, is the best book yet on how the sacred cause of “diversity” merged with pedal-to-the-metal capitalism to bring us the Great Mortgage Meltdown.

The book hasn’t garnered the attention it deserves—probably because it makes clear the bipartisan responsibility of both her opponents on the Right and her friends on the Left.

Our Lot focuses equally on the misdeeds of both capitalists and leftists. But I won’t give the boiler room boys as much attention in this review because they’re a more familiar tale, while Katz's reporting on the role of her side is compelling “testimony against interest.”

Katz is remarkably frank about how government programs and political pressure to boost minority homeownership helped blow up the economy. She’s particularly good at explicating how leftist housing activists, such as ACORN and Gale Cincotta, the godmother of the Community Reinvestment Act, worked with Democratic politicians such as Bill Clinton, HUD Secretary Henry Cisneros, and Jim Johnson, CEO of Fannie Mae, to lay the groundwork for the Bubble and Bust.

Katz doesn’t devote quite as much depth to the Bush Administration's culpability (which, to my mind, is even greater). Perhaps she lacked Republican contacts to give her the kind of inside story she got on her own party’s mistakes.

Still, Our Lot makes clear that on housing policy, the Clinton-Bush years form a single continuum with one overarching plan: boost the minority homeownership rate by lowering credit standards. I call it the Era of Multi-Culti Capitalism.

And there’s little reason to think that its lessons have been learned yet.

Katz begins her book in 1972, in the collapsing Austin neighborhood on Chicago’s Far West side, where Gale Cincotta was a Greek-American housewife.

Fortuitously for me, Our Lot fills in the political backstory of my own in-laws’ lives. My wife grew up in Austin, which had been a peaceful, densely populated working class [actually, middle class] neighborhood where small children could play safely on the crowded sidewalks. Suddenly, in the late 1960s, middle class blacks began buying into the neighborhood.

Friends warned my late father-in-law, a classical musician and union leader, to flee, that underclass blacks would follow. But he and my late mother-in-law, a schoolteacher, resolved to show that integration could work.

After my future wife was mugged twice and her younger brother once, however, my in-laws finally sold in 1970—losing half their life savings. They moved 63 miles out of Chicago, to a dilapidated farm where they lacked running water for their first two years. (And my father-in-law started voting Republican.)

How did this disaster hit Austin? Katz demonstrates that it was the direct result of a 1968 change in the Federal Housing Administration, which set off a bubble and bust in America's inner cities, like a smaller precursor of this decade. As in 2005,

“In 1972, in Chicago and in every other city in the nation, almost anyone could get a home mortgage, including borrowers who didn’t earn enough to pay them off, on just about any house, for any reason. … And just like the recent adventure in lending beyond any rational limits, the mortgage disaster of the early 1970s was born from a lofty ideological conviction that enabled the basest of crimes and most foolish of gambles under its cover, insulated from almost any scrutiny until the damage was already done.”

Franklin D. Roosevelt had started the Federal Housing Administration to insure home loans, and Fannie Mae to buy loans from lenders. Together, these agencies created the familiar template of 30-year-year fixed rate mortgages with a moderate down payment that underpinned the growth of home-owning suburbanites after WWII.

FDR’s FHA, however, was reluctant to back loans in black neighborhoods—a practice that Cincotta later dubbed “redlining.” Eventually, in 1968, liberal Illinois Republican Senator Charles Percy and the Johnson Administration revamped the FHA in a more politically correct direction. Katz explains:

“The FHA was now, in effect, a front in the War on Poverty. … Under the new regime, homebuyers living in Chicago and other inner cities weren’t just eligible for loans. Lenders who signed up to sell FHA-insured mortgages were asked to do everything they could to make sure the buyers got them.”

Of course, the results of the Federal government's encouraging mortgages with down payments of never more than $500 were absolutely predictable:

“Across the country, neighborhood destruction became a booming business, financed by the federal government. In Chicago they called it ‘panic peddling.’ In New York, it was ‘blockbusting.’ … The FHA-insured loans threw gasoline on that smoldering fire. … Indeed, the insurance made it profitable to seek out the most impoverished and unreliable borrowers, since the sooner a borrower defaulted on a loan, the more quickly the lender would get paid back in full by FHA.”

In Chicago, Gale Cincotta started a national coalition of “community activists,” who helped pass the Home Mortgage Disclosure Act of 1975 and the Community Reinvestment Act of 1977. Cincotta remains a heroine to the author, although she can’t quite make clear Cincotta’s logic. If the feds encouraging lending to minorities had destroyed Austin, how was more hair of the dog that bit you supposed to fix Austin?

Sadly, Austin remains unfixed. On a visit to Chicago earlier this month, my wife drove by her old house. Her former home had no doorknob, just an empty hole in the front door. But at least it was still standing, unlike two large apartment buildings on her old block, which are now just crabgrass-covered vacant lots.

Cincotta died in 2001—across the municipal border from Austin in Oak Park. In telling contrast to Austin, that prosperous suburb that had succeeded in saving its famous district of Frank Lloyd Wright homes (where my father was born in 1917) by limiting the number of blacks allowed to move in through its notoriously illegal but effective “black-a-block“ quota.

Katz notes that Cincotta's organization of the left, combined with the invention of mortgage securitizing by investment banker Lewis Ranieri in 1983, made possible the disasters of this decade.

Cincotta began siccing her “pushy capitalist radicals” on Fannie Mae, which remained reluctant to buy the dubious mortgages of likely deadbeats. Still, Katz writes, “The reality was that to meet its growth objectives, Fannie Mae needed these poor people as much as the poor people needed them.”

“How did Fannie Mae and Freddie Mac … turn into the world's biggest funders of Wall Street-backed subprime mortgages? … It all started with the best of intentions, with … the activists who demanded bank loans for the poor and urban.”

But how can any of this more recent history be of any importance compared to events from Glenn Miller’s heyday?