Administration Hopes to Control the Web with 'Net Neutrality'

The big-government enthusiasts who run the government have their sites set on regulating the internet so they can make it less free and more to their liking.

Judge Andrew Napolitano discussed the administrations shenanigans with Stuart Varney this morning. The judge observed the reason for the attempt to ram through the regulations without the required 30 days public notice: The change is radical and because the President wants to preside over the change, because he wants to be able to regulate the content of information. You heard it here. 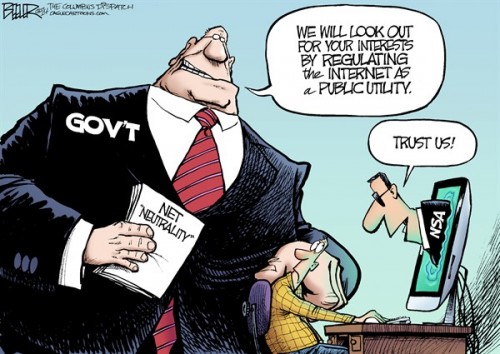 Rush Limbaugh spent a lot of time Tuesday discussing the net neutrality issue and the threats that it poses to the freedom we have grown to expect on the web. As a website operator, the topic of licensing got my attention:

Obama Exploits the Ignorance of Young People to Seize Control of the Internet, February 24, 2015

RUSH: On Thursday the FCC is gonna vote on net neutrality. I have some people sending me e-mail, asking me what it is. Ill sum it up as best I can for you, but what is going to happen Thursday is a direct result of Obama hijacking the effort essentially, let me just put it to you this way. Do you own a website, do you operate a website? If Obama gets his way, youre gonna have to get a license for it just like radio and TV stations get licenses, because the Internet is gonna be subject to regulation under Title II like broadcast facilities are. Cable is not, but over the air broadcast But they cant wait to regulate the Internet, folks, they just cant wait.

Licensing is a big stick of control. It is used occasionally to smack radio stations into politically correct compliance, such as when efforts were made to shut down a radio station owned by Washington Redskins proprietor Daniel Snyder because the team name is consider hate speech by the left.

In 2012, Jane Fonda and Gloria Steinem appealed to the FCC to remove the license from the radio network that carried Rush Limbaugh because he had said unkind things about alleged feminist Sandra Fluke and other leftist women.

Websites that criticize open borders or the liberal ideology of diversity would be likely targets of FCC enforcement. We can look to the IRS harassment of Tea Party groups to see how easy it is for an overly powerful government to suppress speech it doesnt like.

For the past two decades, Internet freedom has been a remarkable success story. It has given the American people unprecedented access to information and an amazing array of opportunities to speak, debate and connect with one another. Its potential seems infinite as Internet companies expand services, technologists invent ever more life-enhancing applications and increasing numbers of Americans go online.

So, in the face of the greatest technological empowerment of people in the history of the world, why are regulators at our respective agencies, the Federal Communications Commission and the Federal Election Commission, calling for new government regulation of the Internet? The answer is simple. Unfortunately, some see any realm of freedom as a vacuum in need of government control.

For its part, the FCC is about to scrap a Clinton-era bipartisan consensus that the Internet should be free from intrusive government regulation. On Thursday, the agency will likely vote to impose rules upon almost every nut and bolt of the Internet, from the digital connection at your house to the core of the network. In so doing, it’ll dust off the heavy-handed monopoly rules designed for Ma Bell back in the 1930s.

How heavy-handed? The FCC will start regulating broadband rates. It will decree, based on a vaguely defined “Internet conduct” standard, whether companies can offer consumer-friendly service plans (such as T-Mobile’s Music Freedom program, which offers customers unlimited access to streaming music). It will institutionalize innovation by permission — giving advisory opinions on prospective business plans or practices (and companies will ask before innovating for fear of what will happen if they don’t). It will even assert the power to force private companies to physically deploy broadband infrastructure and route Internet traffic in specific ways. And in a gift to the plaintiffs’ bar, the FCC will deputize trial lawyers to file class-action lawsuits if they contend that any of these rules are being violated.

So why is the FCC swinging the regulatory sledgehammer? It’s not to guarantee an open Internet. Nowhere in the 332-page plan — which you won’t see until after the FCC votes on it — can one find a description of systemic harms to consumers or entrepreneurs online. And small wonder, for the Internet is open today. Consumers can easily access the content of their choice. Online entrepreneurs can and do innovate freely.

No, the purpose is control for control’s sake. Digital dysfunction must be conjured into being to justify a public-sector power grab. Aside from being a bad deal for everyone who relies on the Internet, this Beltway-centric plan also distracts the FCC from what it should be focusing on: increasing broadband competition and giving consumers better broadband choices.

While the FCC is inserting government bureaucracy into all aspects of Internet access, the FEC is debating whether to regulate Internet content, specifically political speech posted for free online.

Twenty years ago, the FEC began to regulate expenditures for political speech on the Internet, but experience quickly demonstrated that such regulation was counterproductive and highly unpopular. After fits and starts, in 2006, the FEC adopted a regulation that protected the right of people and groups to disseminate political commentary online free from regulation. Specifically, the 2006 rule exempted from regulation all political commentary that citizens and groups post online for free, including on websites, blogs and social media platforms. (The FEC maintained regulation over online posts by campaigns and PACs as well as paid advertisements.)

The freedom protected by the 2006 rule fostered a robust national forum for political discussion. Millions of Americans post political opinions for free on blogs, chat rooms, comment boards and social media platforms like YouTube and Facebook. Without government regulation, political speech and civic engagement have flourished on the Internet, and ordinary citizens have had the same freedom and ability to disseminate their political opinions to a wide public audience as large media corporations.

Despite this success, the FEC finds itself locked in a renewed debate over the regulation of online political opinions. The debate was triggered last October when commissioners split 3-3 in a case involving a group that posted two political videos on YouTube without reporting them to the FEC. Three commissioners (including the co-author of this piece) voted to exempt the YouTube videos from regulation under the 2006 Internet rule while three voted to investigate and regulate the organization. Two months later, commissioners split again over the metes and bounds of the 2006 Internet freedom rule in a case involving an organization that simply posted political news releases on its own website. Even though it would require four votes for the FEC to regulate the Internet, these close votes and the risk of idiosyncratic case-by-case enforcement inevitably discourage citizens and groups from speaking freely online about politics.

Following these deadlocks, the FEC held a hearing this month on Internet regulation and other issues. About 5,000 citizens submitted comments urging the FEC to keep its hands off the Internet. Three former FEC commissioners and five nonprofit groups testified that the Internet should not be regulated. Even “a little” regulation, they maintained, would suppress significant amounts of political speech — for no compelling reason. Significantly, as one former FEC commissioner testified, a decade of free Internet speech has not given rise to corruption. Freedom has served us well.

The bottom line is that Internet freedom works. It is difficult to imagine where we would be today had the government micromanaged the Internet for the past two decades as it does Amtrak and the U.S. Postal Service. Neither of us wants to find out where the Internet will be two decades from now if the federal government tightens its regulatory grip. We don’t need to shift control of the Internet to bureaucracies in Washington. Let’s leave the power where it belongs — with the American people. When it comes to Americans’ ability to access online content or offer political speech online, there isn’t anything broken for the government to “fix.” To paraphrase President Ronald Reagan, Internet regulation isn’t the solution to a problem. Internet regulation is the problem.

Ajit Pai is a member of the Federal Communications Commission. The opinions expressed are solely those of the authors and do not necessarily represent the position of their agencies or the U.S. government.

Lee Goodman is a member of the Federal Election Commission.