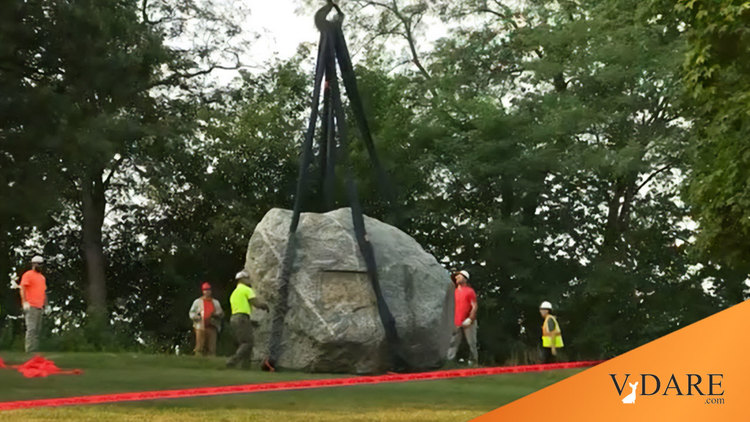 The absolute state of Western Civilization:

The University of Wisconsin has removed a 70-ton boulder from its campus after complaints by minority students that it is a symbol of racism.

According to ABC News, Chamberlain Rock, named after geologist and former university president Thomas Crowder Chamberlain, was referred to, in the 1920’s, by a derogatory term for black people.

According to the Wisconsin State Journal, the term “n*****head” was commonly used in that era to describe any large dark rock.

The Black Student Union called for the rock to be removed last summer, saying it represents the campus’ racist past.

“I’m grateful that we have had the opportunity to do this and that the rock will be removed,” the group’s president, Nalah McWhorter, said. “It was our demand, and it was something that we put all the work in for.”

In January, university Chancellor Rebecca Blank approved removing the rock, but its removal needed to be approved by the Wisconsin Historical Society because it sat within 15 feet of a Native American burial ground.

The boulder will be moved to university-owned land near Lake Kegonsa. The school says it will place a plaque in Chamberlain Hall to honor the former university president instead.

From statues of Christopher Columbus and Confederate Generals, to a racist rock…

Hey-hey-ho-ho-Western-Civilization-has-got-to-go… even if it’s an inanimate object like a 70-ton boulder.