Innumeracy: 59% Of British MPs Flunked Probability Of Flipping Two Heads In A Row

Polling firms have financial and cultural incentives to make poll respondents sound pretty smart. So we seldom see surveys designed to reveal how clueless people (especially elite people, such as British Members of Parliament) tend to be. Here’s a small survey of MPs from 2012 on the question: if you flip a coin twice, what is the probability of getting two heads?* 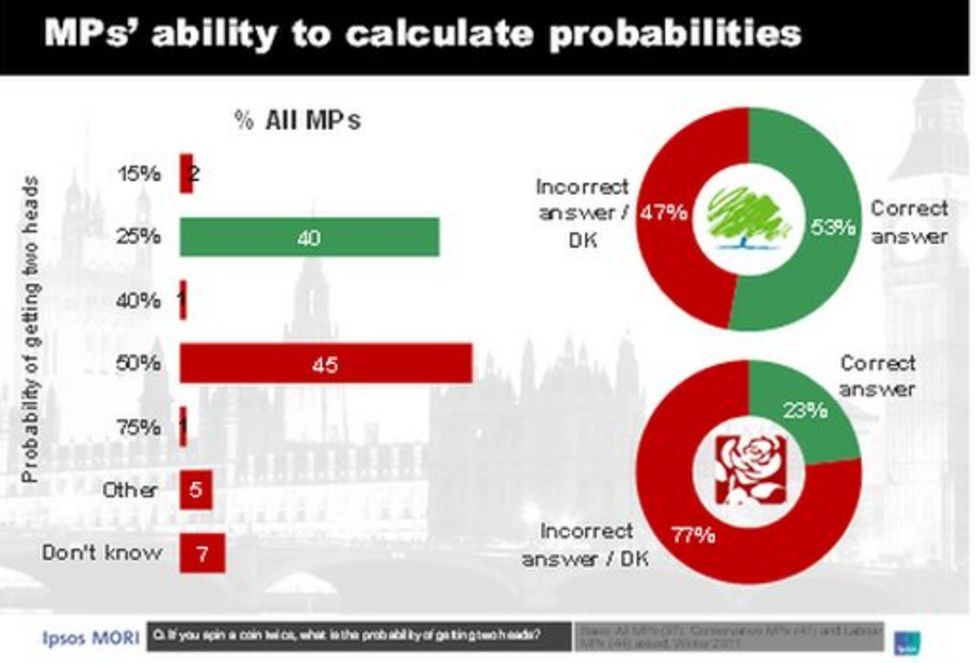 … And when the Royal Statistical Society (RSS) recently tested the ability of honourable members to answer a relatively simple mathematical question, only a quarter of Labour MPs got it right.

A total of 97 MPs were asked this probability problem: if you spin a coin twice, what is the probability of getting two heads?*

Among Conservative members, 47% gave the wrong answer, which is disappointing enough. But of the 44 Labour MPs who took part, 77% answered incorrectly.

Here’s part of the Private Universe video in which the documentary makers asked Harvard grads and blue collar kids at a public high school why it’s hotter in summer than in winter. Both groups said it’s because, you see, that the earth’s orbit around the sun is an ellipse, so that means we are closer to the sun in summer so it’s hotter. But the townies sound not very confident when offering this explanation—after all, who is going to believe a townie about science—while the Harvard types display persuasive self-confidence. (Granted, I don’t know how many people got the answer right and got cut out of the video. But still …)