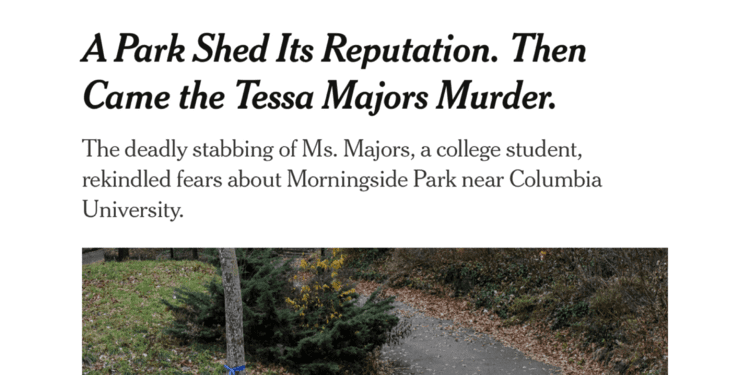 A Park Shed Its Reputation. Then Came the Tessa Majors Murder.

Morningside Park seems to jut up, like a narrow extension of Central Park, into Upper Manhattan — separating affluent Columbia University, in the elevated Morningside Heights neighborhood, from Harlem to the east.

“It’s literally the border between the Columbia community and Harlem,” said Amanda Ong, 21, a Columbia senior.

The park was long considered to be a dangerous expanse, especially after nightfall. But as crime dropped over the years, so did those fears. …

Columbia’s relationship with its surroundings has had many uneasy patches. The university, which has a huge endowment and owns scores of buildings, has been criticized by some longtime residents as a gentrifying force.

Tyrone Carter, 60, who works in a wine shop in Harlem, said that growing up in Harlem, he and his friends rarely ventured to Morningside Heights because it was “a different demographic.”

“People here lived through a heroin epidemic, a crack epidemic,” Mr. Carter said. “So being black in Harlem, some see it as invasion when young white up-and-comers start buying up buildings. I was born and raised in Harlem, and I can barely afford to live here now.”

Maria Lopez, 61, a longtime park neighbor, gazed at the crime scene and said, “When I was growing up, and even in my 20s, you never came to this park, daytime or nighttime.”

But now, she said, many newcomers exhibit a boldness that contrasts with the wariness that some older New Yorkers retain from more dangerous times.

“People with money think, ‘I have the right to walk through here,’” she said. “Old-timers would never do that.” …

The attack also reopened longstanding questions over both racial tensions and Columbia’s relationship with more economically struggling nearby neighborhoods with many black and Hispanic residents.

Some students said they were worried less about their own safety than about the attack being used to portray Harlem as unsafe.

“A lot of response I’m getting from people is, ‘Oh, be careful of that area,’” said Ms. Ong, the Columbia senior, adding that such a response was “racially coded.”

Matthew Lim, 22, a Columbia junior, also worried about how the news might affect the relationship between the Columbia community and longtime Harlemites.

“We know that, just because of one incident, we shouldn’t make broad-stroke judgments about people who live here, but it’s hard if it affects a member of our community,” he said. …

The local city councilman, Mark Levine, called the park much safer than it was 20 years ago, but added that the recent uptick in robberies was “unacceptable.”

He said that some of the messages his office received from constituents after the attack were “laced with ugly and inappropriate racial comments” — some demanding the return of stop and frisk and a more aggressive style of policing more common two decades ago.

“One of my concerns arising from the young age of the suspects in this case is that there’ll be pressure on police to ratchet up aggressive enforcement on kids as young as 13,” Mr. Levine said. 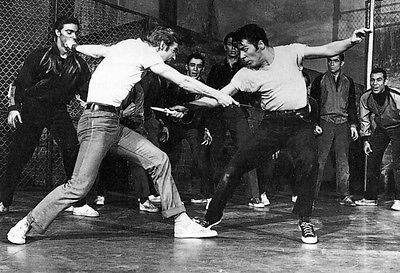 A reader points out that the state of New York recently rolled back its 1958 Jets vs. Sharks Law Knife Control Act banning switchblade-type knives because (what else?) anti-racism:

A decades long ban on gravity knives has been lifted in New York after years of trying. Chad Arnold, Staff Writer

ALBANY – New York’s decades-long ban on gravity knives has come to an end.

Cuomo’s approval comes after a federal judge earlier this year ruled the ban was unconstitutional.

The ban, the court ruled, was too vague and disproportionately impacted workers who carry folding knives for their jobs.

Minorities were also disproportionately impacted by the ban, according to advocacy groups who urged the ban’s repeal.

Gravity knives are folding blades that are opened with a press of a button and a flick of the wrist.

The blades were banned in New York in the 1950s following a string of knife crimes, a memo attached to the bill said.

Knife aficionados no doubt have strong opinions on how gravity folding knives are totally different from switchblades.

At the heart of the issue were basic utility knives — small pocket knives commonly sold in hardware stores and used by construction workers and other contractions throughout the state.

The knives were commonly mistaken for gravity blades by law enforcement, leading to unnecessary arrests, according to the Legal Aid Society, a public defenders group in New York City that urged the ban’s repeal.

“Many of these individuals purchase knives at your stores and use them in their jobs as electricians, stagehands, and construction laborers to earn a living,” the group said in a letter sent to retailers last month urging support of the bill.

Are there any minority stagehands in New York? Here’s an article on how stagehands at the Met Opera can make over a half million per year: “Jobs are often passed from father to son, and some members are now the fifth generation of their families to hold Local 1 cards. [Union boss James J. Claffey Jr.,] whose total compensation in 2011 as Local 1’s chief was $277,000, is one of six Claffey brothers in the union.”

“No more will unsuspecting and otherwise law abiding New Yorkers — most of them people of color — be swept up into the criminal justice system due to arbitrary enforcement of a broadly worded statute,” Assemblyman Dan Quart, D-Manhattan, the bill’s sponsor, said in a statement….

In a statement, Savino said the previous gravity-knife law “unfairly targeted black and Latino workers who use these knives on job sites everyday.” …

Law-enforcement groups urged the governor to veto the bill, arguing a repeal would lead to a spike in knife-related crime and impact public safety.