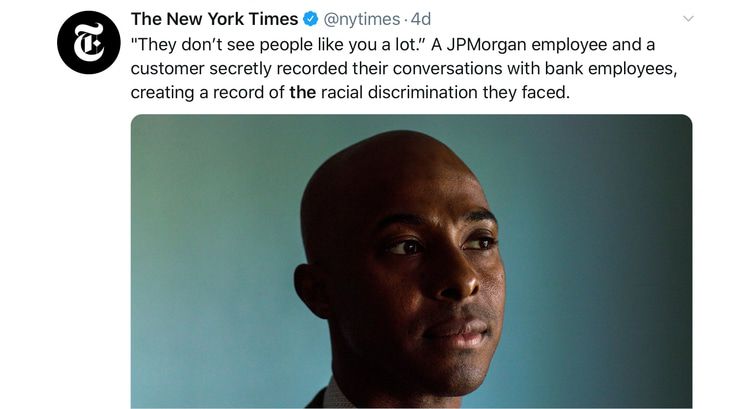 Discrimination lawsuits alleging racism by deep-pocketed corporations (a.k.a., Black Retirement Planning) are a popular topic for credulous news articles. A recent innovation has been black customers citing black employees’ statements about how the black customers are being discriminated against as proof, such as in the Naperville Buffalo Wild Wings brouhaha.

And now the New York Times is extremely worked up because a black employee of JPMorgan told a black customer that he shouldn’t demand to be served by somebody else because the white employees are racist against him:

This Is What Racism Sounds Like in the Banking Industry

A JPMorgan employee and a customer secretly recorded their conversations with bank employees.

Jimmy Kennedy earned $13 million during his nine-year career as a player in the National Football League. He was the kind of person most banks would be happy to have as a client.

But when Mr. Kennedy tried to become a “private client” at JPMorgan Chase, an elite designation that would earn him travel discounts, exclusive event invitations and better deals on loans, he kept getting the runaround.

At first, he didn’t understand why. Then, last fall, he showed up at his local JPMorgan branch in Arizona, and an employee offered an explanation.

“You’re bigger than the average person, period. And you’re also an African-American,” the employee, Charles Belton, who is black, told Mr. Kennedy. “We’re in Arizona. I don’t have to tell you about what the demographics are in Arizona. They don’t see people like you a lot.” Mr. Kennedy recorded the conversation and shared it with The New York Times.

It’s no secret that racism has been baked into the American banking system. There are few black executives in the upper echelons of most financial institutions. Leading banks have recently paid restitution to black employees for isolating them from white peers, placing them in the poorest branches and cutting them off from career opportunities. Black customers are sometimes profiled, viewed with suspicion just for entering a bank and questioned over the most basic transactions.

This year, researchers for the National Bureau of Economic Research found that black mortgage borrowers were charged higher interest rates than white borrowers and were denied mortgages that would have been approved for white applicants.

As we all know, the 2008 mortgage meltdown was due to not lending enough money to minorities.

Banks, including JPMorgan, say they are committed to eradicating the legacy of racism. And they insist that any lingering side effects simply reflect stubborn socioeconomic imbalances in society as a whole, not racial bias among their employees.

What recently transpired inside a cluster of JPMorgan branches in the Phoenix area suggests that is not true.

Mr. Kennedy was told he was essentially too black.

By another black. Who wanted Mr. Kennedy to retain him as his banker rather than to switch to a white banker.

But who cares about the details of who said what to whom?