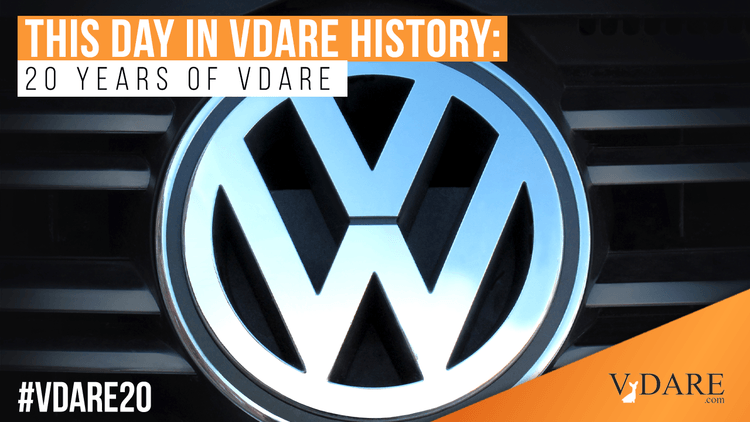 This Day In VDARE.com History, 2015: California Reader Notes That The MSM Is WIlling To Blame Volkswagen For "Dozens" Of Emissions Deaths, But NEVER Applies This Logic To Immigration

Originally published on this day in 2015.

The Associated Press has gone to the trouble of doing an analysis of the Volkswagen emissions scandal that blames the company for some hypothetical statistical increase in deaths: AP analysis: VW evasion likely led to dozens of deaths, Associated Press, by Seth Borenstein, October 5, 2015.

How many Americans have died from poor air quality from decades of immigration non-enforcement?

Here's a great way to calculate the Deaths: test all the vehicles seized from illegal aliens in the City of Bell, CA and Huntington Park, CA, get an average and multiply by the federal government's official illegal alien rate for the entire nation.

And please don’t forget the mass immigration policy which drives the ever increasing emissions standards , which never seem to work. (Odd the air gets more polluted and traffic longer in spite of the state importing millions of Latino drivers.)

Air quality across the nation is dropping on account of invasion generated growth; every advance in internal combustion engine technology has been obliterated by immigrant growth.

And worse, the technology advances our immigration policy is predicated on haven't appeared. A present, solar energy is just a tax, it doesn't solve the issue of millions of polluters moving in every year.