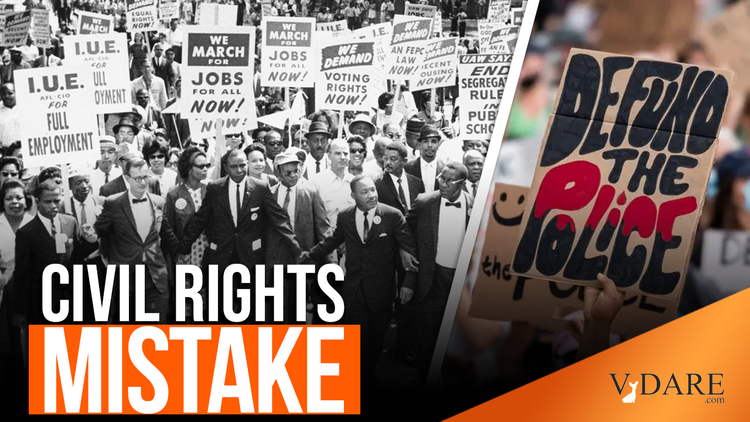 A Reader In California Says Integration Has Failed, May Move To AZ If Biden Wins

Re: Hispanic Immigrant Says 1964 Civil Rights Act Enabled BLM War Against Historic American Nation And It Should Be Repealed and Jefferson's Prophecy, The Rest Of The Story: "The Two Races, Equally Free, Cannot Live In The Same Government"

From: A Reader In California [Email him]

With regards to your thesis in VDARE.com, you are spot on!  We tried.  We really did.  Civil Rights Act.  Voting Rights Act.  Affirmative Action.  Trillions and trillions of Reparations in transfer payments of one kind or another.  It was all for naught.  We now have a race responsible for 50% of the murders, 60% of the violent crime and which has 75% illegitimacy.  By any measure, this is a failure.

Watching the frenzied mobs riot, I could not see the point.  Any young black kid with an ounce of gumption and ambition will find the doors thrown wide open for him across the board.  He can get a full ride at Harvard with a C or B average in High School while the white student with a mere A average can only dream…. what is the complaint?

I, for one, have given up on the subject.   I live in what was once Paradise Found, California, but is now Paradise Lost.  I am thinking of moving to AZ pending the outcome of the November Election.

If Trump wins, I shall stay (for family reasons) but if the mentally defective Biden wins, I am off to a town that is 92% White.  There I shall spend my declining years.  I just don’t want to be around “them” as I regard “them” as volatile and dangerous.

Thank you for stating what I believe is the obvious.