From: Sam [Email him] 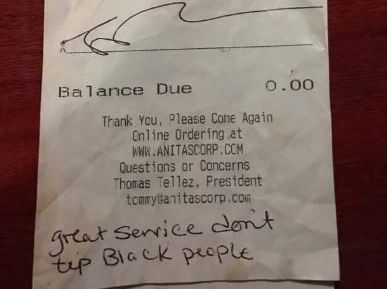 Since racist hoaxes seem to be en vogue lately, I thought it important to point out an example in my community.

Anyone responsible for exacerbating racial tension in this country, as this waitress tried to do, and attributing it the political climate should be held accountable whenever possible.

There is plenty of coverage of the response of the customer.  Here is one example:

Lawyer: Racist Note Given To Black Waitress In Virginia Is A Fake

A black waitress who received thousands of dollars in donations after she claimed she received a racist note and no tip from a patron last month fabricated the incident, the customer claims.

Kelly Carter, a waitress at Anita’s New Mexico Cafe in Ashburn, Va., claimed that a white man stiffed her on his $30.52 restaurant bill and wrote “Great service, don’t tip black people” at the bottom of his receipt.

But the note was forged, says Daniel Hebda, a lawyer for the customer. [more]

UPDATE: On February 24, a lawyer came forward saying his client did not leave the note "Great Service Don't Tip Black People" and maintains the receipt is fake.

According to the lawyer, the man tipped Ms. Carter one cent due to poor service and wrote "terrible service" on the bottom of the receipt left on the table. The man believes that someone reprinted the receipt and wrote zero tip and the "Great Service Don't Tip Black People" note.

So his original note didn't say either "Great Service" or "Don't Tip Black People" it said that there was lousy service, and he was tipping one cent(to make it clear he didn't just forget) with no reference to race. There have been many stories like this—three examples: But it would be Fake News even if it were true—suppose a white client did insult a black waitress in a Virginia restaurant, why is the MSM treating it as newsworthy, like they don't treat Mexican rapes, or black crime? It's because of the Narrative.