From: A Soon-To-Be-Former California Woman [Email her]

I have been following the genocide of white farmers in South Africa knowing in the pit of my stomach it is headed to my Northern California neighborhood. An email I got (below) is simply another canary in the coal mine.

We currently live in what was a lovely neighborhood in Sacramento, California. It is the same neighborhood Supreme Court Justice Anthony Kennedy lived in for many years.

The passing of Prop 47 (turning felonies into misdemeanors) and then Prop 57 (paroling “nonviolent” felons)have led to an increase in criminal behavior that goes unpunished. The lack of consequences further encourages the local criminal element to behave badly.

The most recent episode of blacks behaving badly has added gasoline to the slow burning fire in Sacramento.

The refusal of Stephon Clark to comply with direct commands and his provocation of the officers resulted in his death. [ Police in Stephon Clark Shooting Were Justified in Using Force, By Jack Dunphy, PJMedia, March 26, 2018 Sycophantic soy boy Darrell Steinberg, the Mayor of Sacramento, with his weak and ineffectual handling of the situation is going to lead to a real conflagration. It is embarrassing to watch video of Clark’s brother’s disruption of a city council meeting. The mishandling of these provocative behaviors are why I believe Stephon Clark was emboldened enough to ignore an officer’s orders.

Four years ago my husband hired an electrical contractor to install some cable and alarms in his business.  The man had a new Mercedes work truck and my husband commented on it. The man shared that when the vehicle was 3 weeks new he was in a hit and run accident. He followed the young black who hit him and dialed the police simultaneously.  The young man pulled his vehicle over and came up menacingly and threatened the man.  Fortunately the police showed up at that time.

The young man had no drivers license, the car was not insured or registered.  The officers gave him a ticket and let him go.

The contractor asked why they didn’t take him into custody and the sheriff replied “black lives matter.”

He then asked “If that had been me I’d be on my way to jail, right?” And the officers affirmed that yes, he would be enjoying a ride to jail.

I just received an email from our local neighborhood website “Nextdoor”. It is the canary.  A woman was assaulted by four black men today.  Another neighbor followed up with an incident. 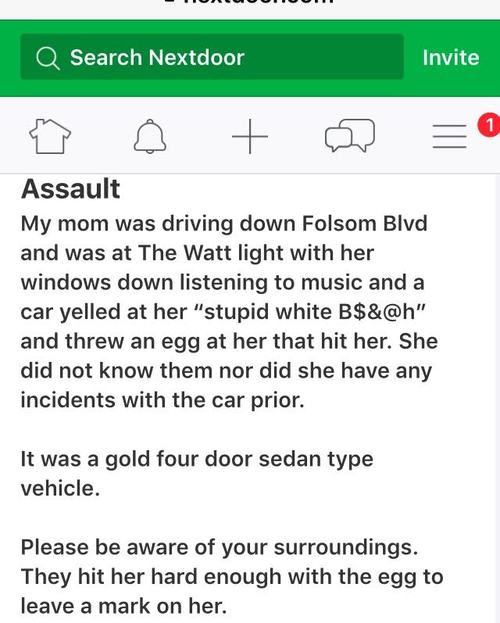 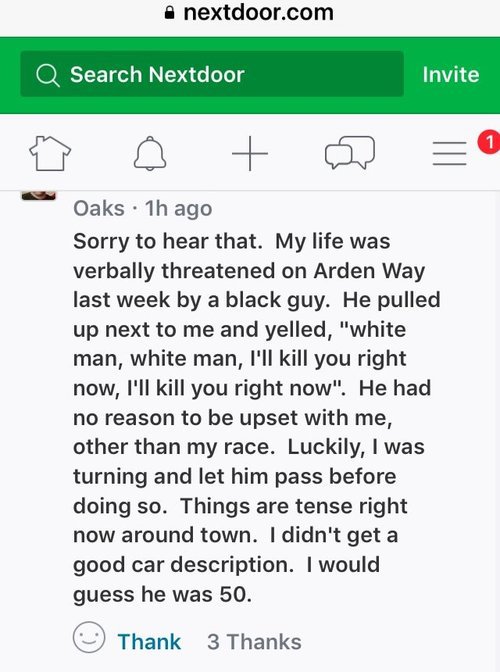 Here are the messages that prompted my email to you.

We had planned to move to Arizona in 3 or 4 years after the kids were out of high school.  Fortunately  (I never imagined I would use that descriptor) my business has been decimated as liberal punishment for being open about my classical liberal values and my faith in God.

My husband lost his job after Thanksgiving and so ever more joyfully we pack.

Our family will be enrolled in tactical weapons training—handgun, shotgun and rifle before we have finished unpacking.  I have no illusions that this 900-mile move is adequate. It only buys time.