A Reader Objects To The US Embassy Honoring Winnie Mandela, Even Posthumously 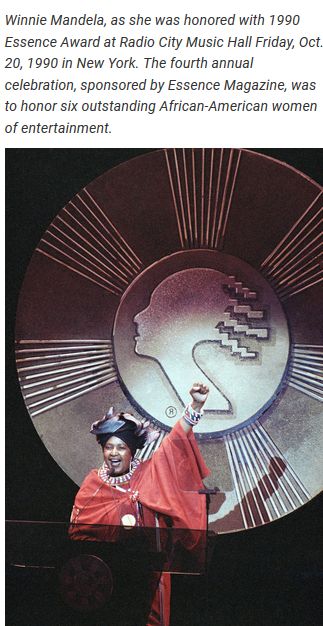 It's bad enough that Trump and his State Department so far have not enacted a new Lautenberg Act for the whites in South Africa who are under extreme pressure from genocidal maniacs. But now insult is added to injury as the State Department has issued a statement upon her passing lauding Winnie Mandela's "formidable strength and leadership", accompanied by a picture of her raising a clenched fist.

The U.S. Mission in South Africa offers sympathies to the family, friends, and to the nation that mourns the loss of Winnie Mandela.  We join in honoring her formidable strength and leadership in the struggle to end Apartheid.

Statement from the U.S. Embassy on the Passing of Winnie Madikizela-Mandela on April 2, 2018 | U.S. Embassy & Consulates in South Africa

As those not blinded by indoctrination from the rainbow nations know, Ms. Mandela was involved in ugly forms of terrorism but benefited from the mantra of the modern age which is "white skin bad/dark skin good". Perhaps the State Department felt compelled to make the statement, not wanting to rock the boat. And perhaps we are lucky they didn't just say  “One Settler, One Bullet.”