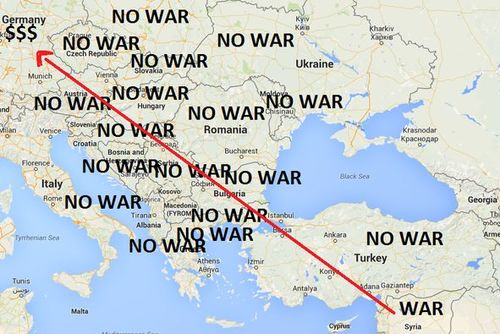 Author Eric Reguly [Email him] makes the usual claim that the migrant invasion of Europe is an economic opportunity because Europe has a low birth-rate and needs a new influx of workers to prop up its social programs. If you read the whole article you will see he cites some studies that claim to show migrants benefit the economy.

Of course, I'm deeply suspicious of these studies but I haven't read them and can't dismiss out of hand. Furthermore, even if I did read them I probably don't have the technical expertise to critique them properly. Could Ed Rubenstein or Steve Sailer at VDare.com dig up these studies and look at them?

Supporters of mass immigration seem to always come up with studies showing that the Third World invasion is good for us. Even I can come up with some obvious objections and they would be similar to what you can read in the comments on this article. Still, it might be worthwhile to examine these studies to see if they actually show what Reguly says they do.

I know the Fraser Institute produced a study showing that immigrants to Canada are a net drain on the country: The Effects of Mass Immigration, September 29, 2009.

And of course, Thilo Sarrazin has been sounding the alarm about the negative impact of low IQ immigration to Europe.

James Fulford writes: The studies Reguly alludes to include Assessing the Fiscal Costs and Benefits of A8 Migration to the UK. Dustmann, C., T. Frattini, and C. Halls. Fiscal Studies 31, 2010[PDF] and Cultural diversity and entrepreneurship in England and Wales, Environment and Planning Rodríguez-Pose A, Hardy D, 2015. [PDF]. (The second is about skilled and entrepreneurial immigrants which is absolutely what is not heading for Europe.)

I’m willing to link to them and cite them as service to VDARE.com readers (Reguly just says that there are such studies) but I’m absolutely not going to read them. My response is the same as when a reader asked us if it could possibly be true that immigration would reduce America’s federal deficit—of course not! They’re either lying to you or they’re lying to themselves.

Using what’s called the “Standard Social Science Model” they assume that African and Syrian refugees are as entrepreneurial as earlier waves of Southeast Asian, Jewish, or Ugandan Asian refugees, which they’re not. Here's our recent coverage of the economics of the thing: