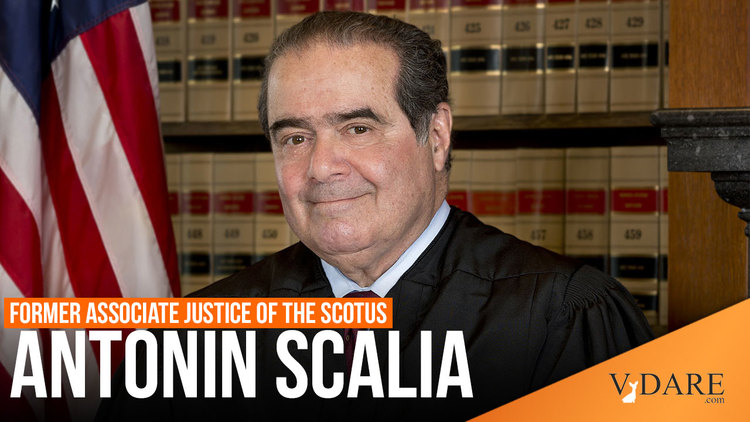 A Reader Says Antonin Scalia, Though Discriminated Against Himself, Failed To Hate Anglo-Saxon America

From: Frank [Email him]

James Fulford’s comments about the late Justice Scalia were interesting. You might want to look at the following:

Scalia was rejected … when he applied to Princeton University. Years later, Scalia gave this reason for his rejection: “I was an Italian boy from Queens, not quite the Princeton type.”  Scalia was rejected by two schools; Dad told him schools without all smart kids might be better, by Debra Cassens Weiss, ABA Journal, December 16, 2015

That article discusses, among other things, how the enormously brilliant Scalia was rejected for undergraduate study long ago by Princeton University.

Scalia basically gave the explanation (most probably correct for the times he lived in) that one generally had to be an upper-crust, rich, WASP male to gain admission back then, since Italians of modest means constituted basically a persona non grata (in most cases) for Princeton University at that time.

Most probably, that analysis by Scalia was correct!

A far cry from the attitude of the many disgruntled people in America today such as the Black Lives Matter crowd!

James Fulford writes: I had to look up Scalia's life on Wikipedia to find out how long ago Princeton might have rejected a young Italian from Queens because he wasn't "quite the Princeton type." It was 1953. At the same time, Princeton had almost no blacks.

Princeton still discriminates against people from Queens—they really hate Trump—but they discriminate in favor of blacks...who resent them anyway.

Steve Sailer says that Michelle Obama, Princeton '85, "will never forgive white America for what she had to suffer: being admitted to Princeton and Harvard despite being not terribly smart."  See Michelle Obama Perpetually Sore About Her Test Scores and Michelle Obama And The Rage Of A Privileged Class.

By the way, the subject of Scalia's education came up when he made a comment about low-scoring blacks going to high-scoring schools in a case about Affirmative Action. See Scalia Probably Read MISMATCH, Not Rushton Or Richard Lynn—But What If He Did Read Lynn?

One more thing: Scalia knew, unlike many liberals, that it's not 1953, 1965, or 1969 anymore. See Scalia On Anti-White Discrimination: “Directly Beneficial” To The “Dominant Political Group”, I. E. Blacks.