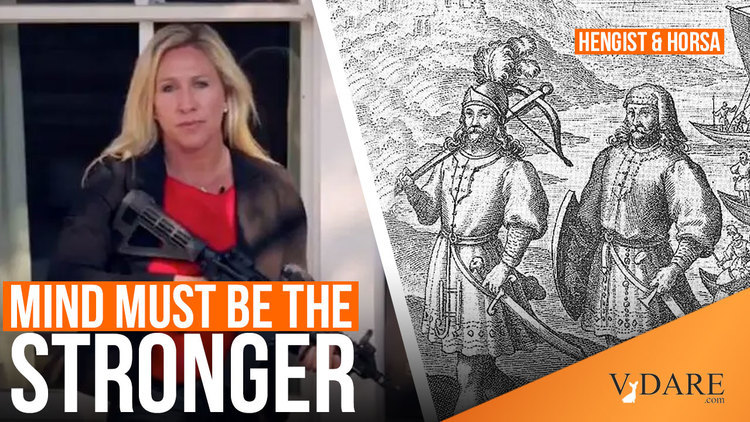 Re: "MIND MUST BE THE STRONGER”— “Anglo Saxon” Caucus Fiasco Shows GOP Bent On Losing. But Also The Way Forward

From: A West Texas Reader [Email him]
You've probably already seen this, here it is in case not.

Ryan J. Girdusky tweeted this video clip of the late Justice Antonin Scalia using storytelling to describe the Anglo-Saxon culture that has bound America together. A great story. I had a similar experience (but on a smaller scale!) to what he describes as bringing about his understanding.

James Fulford writes: Scalia was proud of his Italian heritage, but also one hundred percent American. For people who don't want to watch video clips, this exchange is quoted on American Greatness by  Pedro Gonzalez, also an example of Americanization:

A remarkable part of America’s story has indeed been Americanization, whereby newcomers have managed to integrate into the common culture established by the mainly Anglo-Saxon descended dominant core populations. The late Justice Antonin Scalia balanced pride in his Italian heritage with an understanding of that inheritance.

Scalia recalled the indignation he felt as a junior in college studying abroad when his French-Swiss professors would constantly refer to “les pays Anglo-Saxons”—the Anglo-Saxon countries, meaning Britain, the United States, New Zealand, Canada, and Australia. “I said, you know, ‘Hey, my name is Scalia, and I’m as American as anybody. Look at this face, is this an Anglo-Saxon face?’” By the end, Scalia balanced his Italian heritage with an inherited culture that “originates with English culture, and that includes Shakespeare, it includes nursery rhymes that we all know, and that we use as examples—that’s our common culture.”