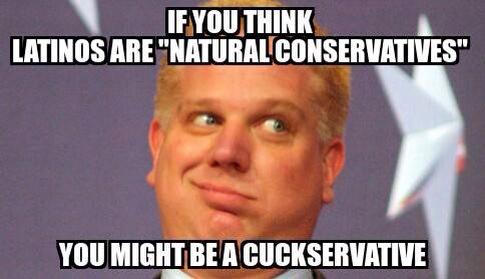 Re: Alexander Hart’s article First They Ignore You, Then You Laugh At Them, Then You Win: How The “Cuckservative” Meme Is Undermining Conservatism Inc.

From: A Loyal Reader in Omaha [Email him]

I, for one, am delighted to see the Donald Trump Insurgency bring the urgent issue of immigration back to the forefront of political debates. The fury of the Beltway Right is simultaneously amusing and pathetic to watch.

One particularly interesting thing I've noticed is how various groups are reacting to the term "cuckservative". The outrage from Conservatism, Inc was predictable. RedState, in particular, seemed to take great offense to it. What really surprised me was that in my searches using various search engines (Google, Bing) I found several left wing sites were denouncing the term as well. Vox, Salon.com, Alternet and the Huffington Post all decried the usage of this clever portmanteau.

The Left getting upset by an insult aimed at Republicans? What's going on here? Perhaps they've enjoyed watching the spineless Cucksevatives appease them all these years and hate to see true conservatives and immigration patriots wage a war against the worthless establishment GOP? I will be anxiously following this election and hope the Republican Party finally learns its lesson on immigration and sends the treasonous pro-amnesty element poisoning them into the dustbin of history.