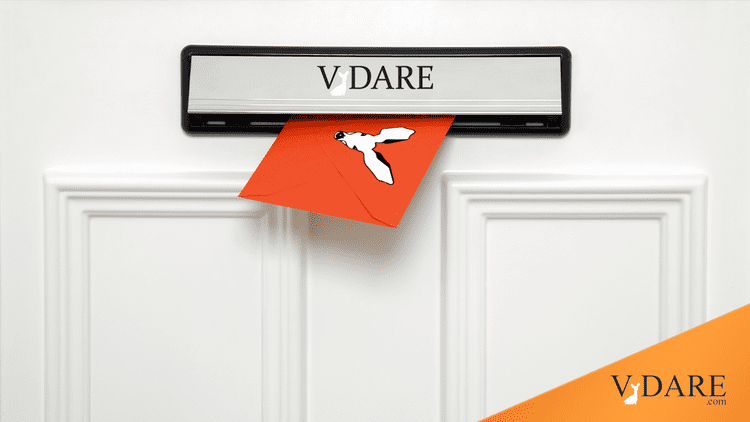 Below is the letter I sent after I called my member of Congress, a Republican with a NumbersUSA A rating. However, his staff, on the other hand, seems to have been infiltrated by Antifa supporters.

On Friday I called your Salisbury office and spoke to "Sean" (no other name given) about mass immigration impacting American workers wages. It was a message I wanted relayed to Andy Harris. I explained to Sean that I thought immigration was destroying American culture and internal stability. After explaining my position "Sean" concluded I was a "f---ing piece of s--- racist" and that I should be out there rioting for social justice and George Floyd. Yes, he said that.

The coarse language did not bother me, and I am not writing because of it. What I am protesting is that a man holding these views is working inside the Republican Party. The reason the GOP exists as a political force at all is because of Donald Trump 's appeal to voters people who actually know what mass immigration, outsourcing, and “diversity” really mean. Trump saved the GOP from itself and it is the GOP's duty is to defend the movement that brought him, and you to power. If your office disagrees you should say so publicly and go find your voters elsewhere.

President Trump was elected on the promise of representing the American worker. As a result, the GOP captured nearly the entire white working class which once went to the Democratic Party. One key element to his popularity was his promise to reduce immigration that was destroying workers ability to get a good wage. Another Trump promise was to end the Open Borders policy that was flooding American cities with gangs, drugs, terrorism, violence. Donald Trump also denounced the refugee resettlement program (administered by the UN) as nothing but a scam, and Trump ended the infamous Diversity Lottery. Trump has the power of mind to see through the code words of “Diversity” and “Tolerance” and recognize them as nothing but the techniques of Leftist social engineering, and psychological warfare. He saw the growing social and cultural divisions created by unassimilable and hostile immigrants. Trump promised and delivered travel bans against countries whose cultures were a menace to our own. He frankly called them out. and did something about them Travel from Sudan, Yemen, Syria, Libya, Iraq, Iran was ended. The result has been a dramatic drop off in terrorist attacks inside the USA. Trump told the truth and the country benefitted and roared back its approval. These are the enacted policies of Donald Trump. If people in your office disagree with those policies or if your office finds them "racist”, then you should frankly say so. Do it now.

Donald Trump's remarkable political triumph (the greatest in American history) was built on the hopes of traditional Americans who "wanted their country back".   After decades of Far-Left attacks designed to gut the country of any identity or history Trump declared the opposite and rode a wave of approval into the White House and into Washington DC. The GOP. which was heading for total defeat and political irrelevance at the hands of Hillary Clinton, rode with him. Trump's views are shared by millions and Trump's appeal is why the GOP now exists at all. Without Donald Trump you would be a small group of Big Business lobbyists hiding inside your country clubs and waiting for the final end of the country...and nothing more.

Regarding my phone call to Sean....there is nothing wrong with wanting a complete moratorium on immigration or calling attempts to replace the white population with an imported population more compliant to socialism. for what it is—genocide. The Democratic Party has been quite frank about its intentions. Time after time the GOP has been warned about the real costs of mass immigration and the social chaos brewing. And always the GOP did nothing but pursue the goal of cheap labor for its donors. This weekend riots fueled by racial tensions have broken out across the country, Minneapolis, Atlanta, Louisville, Chicago, Phoenix, Los Angeles are all in flames.Still you keep repeating the lies about Multiculturalism and Diversity. The flash point of the riots was the Somali immigrant center in Minneapolis a town transformed from Mid-West tranquility into Third Word battleground of hatred and resentment and warfare with the police that led to the George Floyd incident. Meanwhile in your own Salisbury office you employ "Sean" who sees nothing wrong with this, and believes in "social justice" and calls conservatives "f---ing racist pieces of s---" and advises them to hit the streets and start rioting.

The placement of Sean (and lots of Seans) inside Government offices is a good explanation of what we have seen over and over during the past three and one half years. Since Donald Trump arrived in Washington DC he has been surrounded by the professional political class, the Obama holdovers, the Wall Street operatives, but more importantly a nearly invisible army of small time subversives and self-promoted “idealists” that did everything they could to sabotage and betray the people and advance their own power and ambitions.

The past three and a half years has been one episode after another of these groups of people, inside the White House and inside every arm of the Government, working in back offices, whispering amongst each other, leaking to the media and doing everything they could to sabotage the President and destroy any hope Americans had of taking back their country.

Fake investigations, false reports, attempted coups, sabotage of policy directives from inside the agencies, activist judges, media cabals, impeachment plotters, leakers, foreign spies. The Mueller Report, the Russia Collusion lies, the Ukraine Hoax, FBI coverups.  Every arm of the Government proved to be filled with these people. The list of professional political class operatives that have stabbed the President in the back, is really remarkable. I have attached a list in case you don’t remember. Some of the names may be familiar.

The Left has infiltrated every nook of American landscape. It owns the schools K-12, the Unions, the Universities, the big urban centers (teeming with New Americans) the Left owns the big foundations, most of the judiciary, all of the Media. Foreign government bent on the overthrow of the United States work through these people I refer you to the networks of Red Chinese spies invited into American universities (in return for a donation) but which Trump has just expelled from the country, or the constant uncovering of Middle Eastern terrorist plotters brought into this country by NGOs. It is people inside the Government that are facilitating the destruction of the country and they always do it with the best of intentions. After all they believe in “social justice” and what could be wrong with that?

Meanwhile the people, the Trump voters, are shut down, ignored, blacklisted, censored, de-platformed, fired from jobs, bullied and beaten down by these very people. Tolerating another mindless Obama Lefty inside your office is to make sure that those people who gave you power, Trump voters, have been cut off from one remaining outlet of expression and will never be heard by anyone inside the political class.

Because Sean does not believe there is a working wage problem,  and because he believes that mass immigration is a benefit and that Multi-Culturalism is enriching then its time for Sean, (like so many inside the political class) to exit the safe confines of Government employment paid for by the taxpayers (which they so despise) and go out and compete for a real job. I am sure he will do fine.