Report: Refugees and Immigrants Are Highly Represented in Terror Convictions

Senator Jeff Sessions’ Immigration Subcommittee has published a study of persons convicted in terror crimes and the results are not promising for the safety of the nation. Despite the horror and deaths of 3000 inflicted on America on 9/11 by Middle Eastern foreigners, the government has learned little about protecting us in the intervening time, as shown by the fact that at least 380 of 580 convicted terrorists were foreign-born. Forty of those foreigners were refugees, which should be a warning about Obama’s project to admit 10,000 unscreenable Syrian refugees during this fiscal year. Why continue to import potential enemies who want to kill Americans? What kind of government does that?

Below, the 2013 Boston Marathon jihad attack, which killed three and seriously injured many others.

Senator Sessions appeared with Sean Hannity on Wednesday to discuss the report:

SEAN HANNITY: Based on research conducted on a list of the Department of Justice, subcommittee on that you’re involved in — let’s see, at least 380 of the 580 individuals convicted of terrorism or terrorism-related offenses between September 11, 2001, and December 31st, 2014, they were 380 of 580 were born abroad.

SENATOR JEFF SESSIONS: Absolutely, and it’s really a lot more than that because we had to find that information from public sources and for large number we couldn’t. I’d say it’s probably pushing 75 percent of those involved in terrorist activities

HANNITY: Were they illegal immigrants or were some foreign born here on visas and we’re not vetting them properly?

SESSIONS: Right, they’re coming mostly, I would assume, on legal visas but they are immigrants themselves, so some are suggesting the second generation or homegrown terrorism is the biggest problem: that’s really not so according to the data.

HANNITY: When Donald Trump said that there’s rapes and murders by illegal immigrants — I sat through a security briefing with Governor Rick Perry and in an eight-year period they reported, his officials, people on the on the borders, they gave the number of 625,000 crimes committed by illegal immigrants against Texans alone, including rape and murder. So this is happening, what Trump said is true, is accurate,

SESSIONS: It’s absolutely accurate, it’s indisputable really. We have a responsibility to protect the United States of America from those who would attack us and destroy domestic stability and tranquility. We can do that. People don’t have a constitutional right to demand entry. We should screen those people. Those who are likely to be prosperous and flourish in America and be good citizens we should admit before we admit those who are likely to be dangerous.

HANNITY: Well the group FAIR did a study and what they found is from the Freedom of Information Act on their behalf that the 30,558 criminal aliens that ICE released in fiscal year 2014 — of the 30,000, 13,288 additional crimes were committed by illegal immigrants that just got out of jail. Why are we letting illegal immigrants that are in prison back out on the street?

Below is a chart which shows the country of origin of the terrorists. More charts can be seen on the Fox News article, Anatomy of the terror threat, 6/22/16. 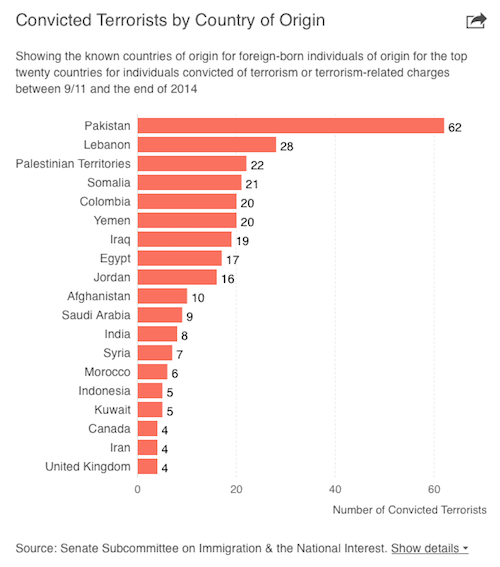 WASHINGTON—Based on open-source research conducted on a list provided by the Department of Justice, the Subcommittee on Immigration and the National Interest has determined that at least 380 of the 580 individuals convicted of terrorism or terrorism-related offenses between September 11, 2001 and December 31, 2014, were born abroad.

On August 12, 2015, December 3, 2015, and January 11, 2016, letters were sent to the Departments of Justice, Homeland Security, and State, requesting the immigration histories of individuals implicated in terrorism since early 2014. For over 10 months, the Obama Administration has refused to provide this crucial and easily accessible information. Since sending the last letter on January 11, however, the Subcommittee has identified 18 additional individuals implicated in terrorism since early 2014 – bringing the total to 131, of whom at least 16 were initially admitted to the United States as refugees, and at least 17 of whom are the natural-born citizen children of immigrants.

However, the Department of Justice (DOJ) did provide the Subcommittee with a list it maintains of 580 individuals not only implicated, but convicted, of terrorism or terrorism-related offenses between September 11, 2001 and December 31, 2014. DOJ has deferred to the Department of Homeland Security (DHS) to provide immigration background information regarding these individuals, but to this day, DHS has not done so – despite having the information on the foreign-born easily accessible in its records and databases.

Using this list, the Subcommittee conducted open-source research and determined that at least 380 of the 580 were foreign-born (71 were confirmed natural-born, and the remaining 129 are not known). Of the 380 foreign-born, at least 24 were initially admitted to the United States as refugees, and at least 33 had overstayed their visas. Additionally, of those born abroad, at least 62 were from Pakistan, 28 were from Lebanon, 22 were Palestinian, 21 were from Somalia, 20 were from Yemen, 19 were from Iraq, 16 were from Jordan, 17 were from Egypt, and 10 were from Afghanistan.

Because the Subcommittee does not have access to the Administration’s databases and files, it continues to lack critical information on most of the individuals on the list. Additionally, the list provided by the Department of Justice does not include cases that are sealed, have otherwise not been made public, or that have been handled strictly through civil immigration proceedings (as terror cases often are).

This information, when considered in light of four major terror attacks in the United States in roughly the past year, alone – Garland, Texas; Chattanooga, Tennessee; San Bernardino, California; and, Orlando, Florida – makes clear that the United States lacks the ability to properly screen individuals prior to their arrival to the United States. It further makes clear that our nation has a serious assimilation problem. Yet, the Obama Administration has not only refused to provide the requested immigration information of these individuals, but it persists in its desire to continue admitting more aliens from many of these high-risk areas of the world, including at least 6,000 more Syrian refugees between now and September 30.

Last week, in response to the terrorist attack in Orlando, Sen. Sessions said the “President’s failure to accept the reality of the threat we face has only emboldened our enemies, and we should expect more attacks like this one unless this Administration’s dangerous policies dramatically change. This colossal failure of leadership endangers us all.”

Last week, a fourth letter requesting this information was sent, this time to the President, himself. Text of the letter follows:

On August 12, December 3, and January 11 we sent letters to the Departments of Justice, Homeland Security, and State, requesting basic information regarding the immigration histories of individuals in the United States recently implicated in terrorism, and prior actions taken to protect our nation from individuals associated with terrorism. To date, we have yet to receive information responsive to these inquiries.

Since our last letter in January, we have identified 18 additional individuals who have been implicated in terrorism since early 2014 – bringing the total to 131. Because your Administration has thus far refused to comply with our request for basic information about these individuals, we have continued our search for immigration information about those we identify using publicly available sources. At least 54 of these individuals were born abroad, at least 16 were initially admitted to the United States as refugees, and at least 17 are the natural-born citizen children of first generation immigrants.

Because we lack complete information for either list, the numbers are likely much higher. And it is clear that these lists do not include cases that are sealed, have otherwise not been made public, or that have been handled strictly through civil immigration proceedings. Nevertheless, these data make clear that the United States not only lacks the ability to properly screen individuals prior to their arrival, but also that our nation has an unprecedented assimilation problem.

When compared with your Administration’s immigration policies, and bearing in mind the four major terrorist attacks in the United States in the last year alone, this inability to properly screen individuals from abroad and assimilate those we admit paints a striking picture. Between Fiscal Years 2009 and 2014, the United States granted green cards to approximately 832,000 individuals from Muslim-majority countries, including approximately 102,000 from Iraq, 102,000 from Pakistan, 85,000 from Iran, nearly 18,000 from Syria, and nearly 20,000 from Yemen. For Fiscal Year 2016, as of June 10, the United States had admitted approximately 19,625 Muslim refugees from across the world, out of approximately 44,340 total refugees. It has also only managed to admit 3,887 Syrian refugees, of whom only 23 were not Muslim.

With your Administration’s goal of admitting 10,000 Syrian refugees and a total of 85,000 refugees this fiscal year, your Administration will fall short unless it admits approximately 10,165 refugees in each of the four remaining months, of which approximately 1,528 would have to be from Syria. Given that we have already identified at least 40 individuals who were initially admitted to this country as refugees and who were subsequently convicted or implicated in terrorism – including an Iraqi refugee who was just admitted to the United States in 2012 and arrested in January of this year – it is clear that ensuring the proper screening of refugees is of the utmost importance.

Sunday’s terrorist attack in Orlando was the deadliest our nation has experienced since the attacks on September 11, 2001. As we honor and remember the victims of the attacks, we must be vigilant in our defense of our nation, and cognizant of the threats we face. Obtaining the information that we requested is essential.

Therefore, we request that you direct the Departments of Justice, Homeland Security, and State to immediately coordinate and complete the attached charts and respond to our initial inquiries. Additionally, please ensure that they update the attached charts with information regarding any cases not included, and please ensure that the list is updated through the date of your reply with any new cases that may arise.

We appreciate your prompt attention to this serious matter. Please contact our staffs if you have any questions regarding this request.