A Reader In Sugarland, TX, Reports Yet Another Example Of Multicultural Propaganda Re The Local Jamatkhana (What?)

From: “Seethng In Sugar Land” [Send her mail]

I felt the need to send you yet another example of the wonderful diversity that is Fort Bend County TX, which includes my city of residence. Sugar Land TX. Sugar Land was named so due to the now gone Imperial Sugar factory that was located here. There’s also an old Goldie Hawn movie that was made here in 1974, The Sugarland Express, long before the word diversity entered our vocabulary. If you watched it today, you wouldn’t even recognize the town.

We get these various flyers and pamphlets every now and then about the goings on in Sugar Land. 9 times out of 10 you won’t see anything related to the country that existed in 1956, when I was born. There’s always an article on a Dragon Festival or Diwali lights or the Chinese New Year. Yesterday I got another one that had a calendar of events on the back, along with this little gem. 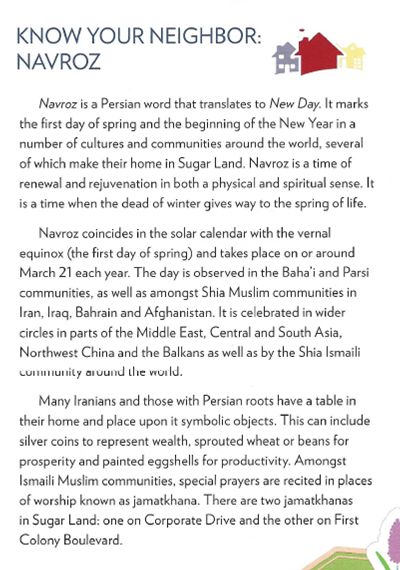 One of the jamatkhanas mentioned in this blurb is about two miles from my house. I have to stomach seeing it every time I go to my bank. The New York Times had an article a while back about how Ft. Bend County is one of the most diverse counties in the country. [.What Ethnic Diversity Looks Like: Fort Bend, by Corrie MacLaggan, November 23, 2013] That one was illustrated with a picture of a Hindu temple. Of course that liberal rag speaks like diversity is a wonderful attribute

My blood boils when I see this propaganda and the continued erosion of the once historic nation.

Instead of the caption above, why couldn’t it read something like this: Know Your Neighbor: Howdy. Howdy is a word that translates to hello. It is used mainly in the Lone Star State and is a derivative from the rodeo days.

But no, we have to celebrate the traditions farthest removed from western civilizations including ones that want nothing more than to behead Americans. It’s to the point where when I go to Kroger, I feel the need to take my passport or a translator. One walks down the aisle and sees these Third Worlders adorned in their third world regalia, yapping in their respective Third World tongues. I have about two more years to work before I retire and it can’t come soon enough. I plan to move to wherever I can find some remaining semblance of the country I grew up in. The country that my ancestors built and whose wars they fought. This country is done.

And when whites are treated like they are in South Africa and the whole country resembles a Third World cesspool, maybe the low information voter will finally wake up and wonder what happened. But as we know, it’ll be too late.

See, earlier, A Reader In Occupied Sugarland TX Reports Multicultural Propaganda From The University Of Houston and A Sugar Land, TX Reader Reports Progress, Which She Credits To The VDARE.com Effect.