A Sugar Land, TX Reader Reports Progress, Which She Credits To The VDARE.com Effect

From: (Still) “Seething In Sugar Land” [Send her mail]

Back in March of 2013 I sent you a flyer from the University of Houston Sugar Land which I had received in the mail.  The flyer featured a Muslim in all her regalia and various and sundry other Third Worlders, who have occupied Fort Bend County TX. There were no evil white Americans in the picture

You posted my letter and had some great links in there where people could send their outrage. [Email Richard Phillips, the Associate Vice Chancellor at UH Sugarland.]

Fort Bend County prides itself in its “diversity” and the fact that this diversity is driving away most of the whites who have lived here since the mid 80s.

Anyway, attached is the most recent flyer I received from U of H Sugar Land. Notice that while there is no evil white Christian heterosexual male in the picture, there are at least four  Americans, two white and two black, and no benefactors from mass legal immigration. 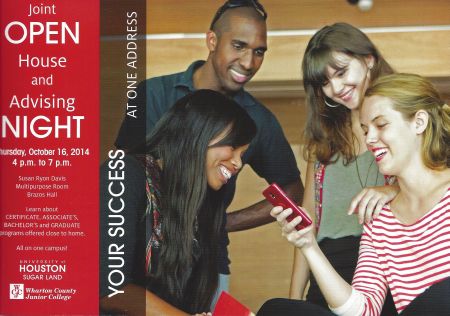 I like to think that VDARE.com had a hand in that and for that I am grateful.