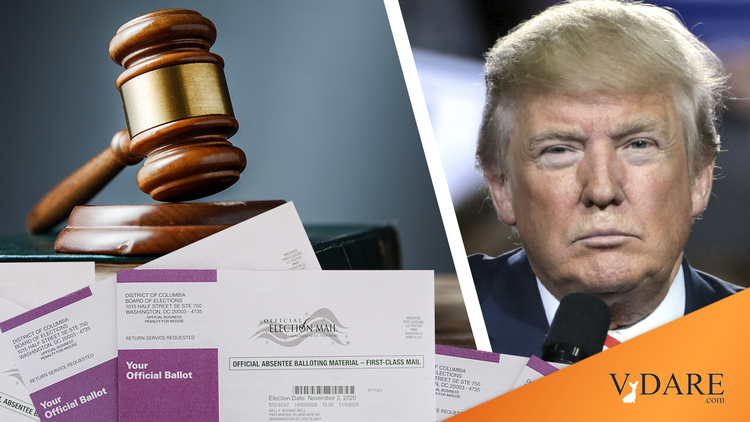 Re: Steve Sailer's October 26 post JFK, Mayor Daley, And The Joy of Counting Your Votes Last

Late last night, Donald Trump appeared to be on his way to re-election. He had sizable leads in states like Michigan, Wisconsin, Pennsylvania, North Carolina, and Georgia. He was also fairly close in Nevada. Joe Biden would need to amount a nearly insurmountable comeback in order to prevail. Of course, at that point, the big city machines in places like Milwaukee, Philadelphia, Detroit, and Atlanta stopped counting. The results are still being tabulated, but the leads in Michigan and Wisconsin have vanished—along with Trump's chances for victory. The most likely explanation is that the big city machines determined how many votes they needed and then delivered. The Left almost certainly cheated. There is, however, a remedy available to the President.

Article II, Section 1 of the Constitution gives the power to choose electors to the individual states' legislatures. Both chambers of the state legislatures of Michigan, Wisconsin, Pennsylvania, North Carolina, and Georgia are controlled by the GOP. To counteract the Left's cheating, the state legislatures of these states should choose electors that will cast their ballots for Donald Trump in the Electoral College. They could say that they are expressing the true intent of the voters in their states. This will provide Trump with the requisite 270 electoral cotes to win, or at least ensure that neither candidate gets 270 electoral votes. That would throw the race into the House of Representatives, where each state has one vote for President. The GOP currently controls 26 state delegations. The Left will almost certainly challenge these actions in Court, but Trump has stacked the Federal Judiciary, including the Supreme Court, with members of the Federalist Society. He has a decent chance of prevailing.

Even if this fails to deliver President Trump a second term, it could be used as leverage in negotiations for some type of policy implementation that the GOP wants. After the disputed 1876 Election, the South was able to secure an end to Reconstruction in exchange for acquiescing to Rutherford B. Hayes's ascension to the Presidency. Perhaps the GOP could extract some legislative changes to our immigration laws in exchange for acquiescing to a Biden Presidency. This would prevent a President Biden from doing something like increasing the refugee intake to over 100,000.

President Trump does not really have anything to lose. He should use every tactic available to remain as President, or at least extract some concessions from the Democrats.