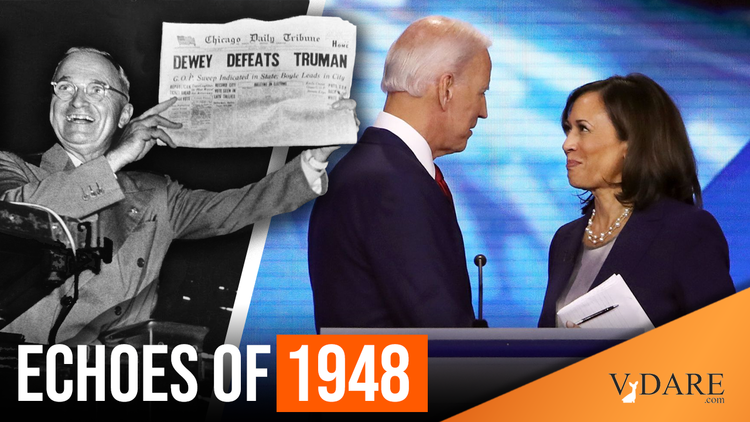 Re: Patrick J. Buchanan's article Is Biden-Harris on Tom Dewey's Path To Defeat?

Fortune Magazine has a piece on Dewey's 1948 loss (famously miscalled by the Chicago Tribune) in 1948:

The 1948 election....may offer a lens by which to understand the outcome of the Trump-Biden race. Here’s how:

If Joe Biden blows what has been a solid lead in pre-election polls, his loss may be attributable to having pursued something akin to Dewey’s glide-path campaign that avoided controversy while trying to nurse a clear lead in the polls.

But if this year’s pre-election polling is accurate and Trump is repudiated, his defeat may be attributed to a failure to adapt Truman’s blueprint for winning in spectacular, against-the-odds fashion.

The actual parallel is that in 1948, Dewey was better known than Truman, the incumbent President, which was not an advantage because he was generally disliked. Much of the pro-Truman vote was an anti-Dewey vote by people who couldn't stand the pompous little man.

Dewey refused to campaign on issues that could have carried him across the finish line, such as Communist infiltration of the Democrat administrations and their support for the Chinese Communists. Dewey didn't seem to mind communists, as he too supported Mao, but he detested conservative Republicans. By 1952, Truman was quite well known, and it didn't help him at all, since his administration was a total failure.