Only a day after another black radical—this time a member of the Nation of Islam—opened fire on white police in Baton Rouge (killing two white officers and one black officer, injuring multiple other white officers), the presumptive nominee for the Democrat Party has doubled down on the idea that racist white police are still out there hunting innocent black people.

Honestly, it’s hard to even keep a straight-face when reading what Hillary Clinton just told the NAACP National Convention in Cincinnati: that she will personally not stop leading a crusade against police “until we root out implicit bias and stop the killings of African Americans.”

As president, l will bring the full weight of the law to bear and making sure those who kill police officers are brought to justice…And let's admit it, there is clear evidence that African-Americans are disproportionately killed in police incidents compared to any other group. And African-American men are far more likely to be stopped and searched by police, charged with crimes and sentenced to longer prison terms than white men convicted of the same offenses. These facts tell us something is profoundly wrong. We can't ignore that, we can't wish it away.

Eight police officers, seven white, have been assassinated in less than two weeks—and Clinton is inflaming the black community’s collective fantasy that there is a racial jihad by white police on “black bodies. “

Of course, the Lying Press, along with assorted NBA athletes [LeBron James on social activism: 'We all have to do better', ESPN, July 14, 2016] is piling on. Thus, incredibly, the white editor of the Memphis Commercial-Appeal [email him] just emitted an editorial addressed to the 65 percent black residents of the city, basically begging for forgiveness for daring to have a headline (Gunman Targeted Whites) reporting the simple truth that white police officers were the intended victims in Dallas. [CA Editor: We got it wrong., by Louis Graham, Memphis Commercial Appeal, July 13, 2016]

All of the black violence against white police (Witness heard Bristol gunman yelling, ‘Police suck! Black lives matter!’ as he opened fire,  WTVR.com, July 8, 2016) comes at a time when President Obama persists in lecturing the very people being targeted for assassination by “black bodies” that the “if police organizations and departments acknowledge that there’s a problem (with white police racism/implicit bias against blacks) and there’s an issue, then that, too, is going to contribute to real solutions” [Obama: Police Can 'Make the Job of Being a Cop a Lot Safer' by Admitting Their Failures, MRC TV, by Craig Bannister, July 11, 2016] 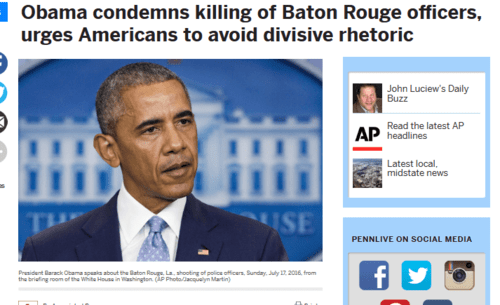 The plain but still-amazing fact is that that this Black Lives Matter-inspired nationwide violence against white police officers has the tacit approval of the White House. Consider how Obama met with the self-proclaimed leaders of this decentralized movement (for three hours!!) only days after the Dallas attack and days before the Baton Rouge assault [DeRay Mckesson Meets With Obama At Black Lives Matter Meeting At White House, IBITimes.com, Cristina Silva, July 13, 2016]

So you have to ask yourself: will all of this black violence against police cool down?

Will some voice of sanity arise, convincing black people that, no, white police officers aren’t hunting “black bodies” and intentionally targeting them execution (that, indeed, the opposite is the truth)? [Surprising New Evidence Shows Bias in Police Use of Force but Not in Shootings, New York Times, by Quoctrung Bui and Amanda Cox, July 11, 2016]

The answer is a resounding “no.” Hillary Clinton has just gone all-in on the claim that white cops are hunting “black bodies” as the winning hand in defeating Donald J. Trump.

This is what her campaign will be defined upon. An entire day at the Democrat Convention next week in Philadelphia is being dedicated to allowing black mothers of would-be cop killers the chance to address the nation on behalf of their dead black sons:

Tuesday: A Lifetime Of Fighting For Children And Families

Featuring President Bill Clinton and Mothers of the Movement

[What To Expect At The Democratic Convention, NPR, by Daniel Kurtzleben, July 15, 2016]

Lezley McSpadden was famously last seen fighting with other family members over who had the right to sell merchandise in the name of her son, the “gentle giant” of Ferguson.  See James Fulford’s The Mothers of the Movement—Hillary And The DNC Go All In For Dead Thugs for more detail.

All of this should be enough for Americans to forever tune out the insanity of what I’ve dubbed Black-Run America (BRA)—or what VDARE.com has succinctly called the Minority-Occupation Government—if it were not for Hollywood also going all-in, with what amounts to basically a celebration of black mass murderer Nat Turner: 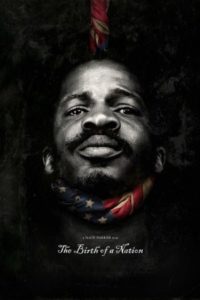 The latest poster for Nate Parker's Birth of a Nation continues the theme of powerful historical images for the movie's marketing campaign.

The one-sheet, which debuted on Tidal, shows Parker's character, Nat Turner, being hanged by a noose made out of the American flag.

Donald J. Trump has stated unequivocally that he stands for “law and order.”

Folks: The Democrats, Hillary, Obama, the Main Stream Media, and those pulling the levers of power of BRA/Minority-Occupied Government are not playing poker anymore with Black Lives Matter—they are playing Russian Roulette.

The good news: This lunacy might just provide the event that forever frees the Historic American Nation from the seemingly eternal chains of white guilt.

And what’s more all we have to do is get out of the way and let our enemies pull the trigger.