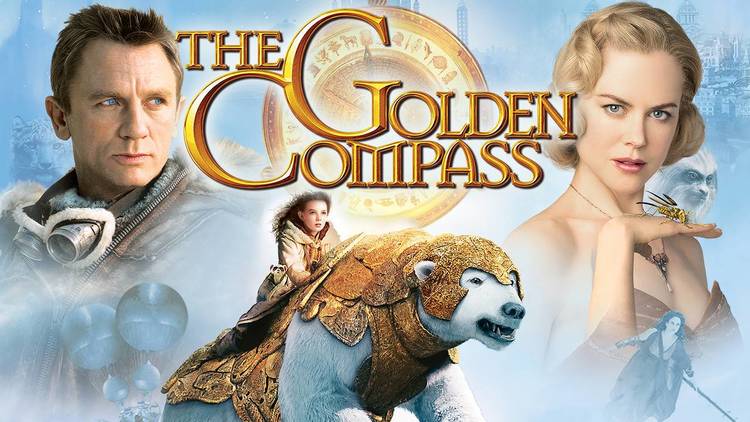 Email War Against Christmas competition entries to us at christmas@vdare.com.

Intrigued by the desperate state of my besieged email inbox once word of the The Golden Compass movie's imminent release, I confess—I read the book by British atheist Philip Pullman  on which it's based!

(It's The Golden Compass

, first volume of the His Dark Materials

and The Amber Spyglass

And, intrigued even further by hundreds of "he-said" articles and postings by the journalistic and blog-happy masses, I saw the movie too!

So I can answer a few questions:

But only because in this case, as very often happens, Hollywood is its own worst enemy.

As evidenced by the many entries to VDARE.COM's annual War Against Christmas Competition, the cultural elite is trying ever-harder to overwhelm Christmas with "The Holidays". This year, as Tom Piatak recently reported, Hollywood has joined in:  after all, what better time to release an atheistic movie than Christmastime?

But Christmas defenders  are getting better at this game (they're not very creative, these "Grinch-o-fascists") and this year they saw it coming.

Starting in early October, the Catholic League, headed by Bill Donohue, began calling for a boycott of the movie.  [See The Golden Compass: Agenda Unmasked(PDF)] Immediately, perhaps because my articles on my experiences as a Catholic student at a (nominally) Catholic college, I started receiving emails from all over the country urging me to pass on the word.

By the time the movie hit the big screen, it was more known for its controversy than from the $50-80 million New Line Cinema [Send them mail] spent in marketing. And now, judging by the preliminary numbers, The Golden Compass going to fall far short of its hoped-for Narnia and Harry Potter status among fantasy-loving adolescents.

Not only that, but the movie itself just isn't very good. In the translation from page to screen, Hollywood takes what is, if nothing else, an original story and turns it into a bland fantasy with a trite triumphalist ending—a total departure from the book's disturbingly dark close. (The heroine Lyra's just-discovered father kills her best friend. But I'll get to that in a moment). Things in the book which required pages and pages of explanation are excluded by the movie, leaving the audience puzzled. Cinematic elements common to low-budget cult classics, such as close-ups of running feet to convey chaos, make unusual reel-fellows with the otherwise-impressive CGI animation. Many of the characters seem flat and cartoonish, and there's even a Star Wars -style "Lyra, I am your mother" moment thrown in for good measure.

In its attempt to make the movie appeal to Christmas crowds, Hollywood has produced a $180 million snoozefest that will entertain neither the purist Pullman fans, nor the casual ticket-holder made curious by the giant armored polar bear (the polar bears are great, actually) on the movie poster.

Not even the anti-Christian sentiments are particularly noticeable in the movie—unlike in the books.  The Magisterium, an obvious reference to the Catholic Church, is nothing more than an oppressive villain organization the likes of which children (and adults) see in Hollywood productions every day. As false as the Wizard in The Wizard of Oz, as omnipresent as Harry Potter's Ministry Of Magic and not as frightening as The Child Catcher in Chitty Chitty Bang Bang—I had nightmares about him for years—the Magesterium is basically a censorship and propaganda machine populated by perverted pontiffs. In the movie, there is no mention of Christ—even God is referred to simply as "The Authority"—and there are no portrayals of Christian rites or prayer. In short, the Christophobic aspects of the movie are so vague and caricatured that even an audience primed to it may not make all the connections.

But that doesn't make The Golden Compass any less significant a move in the chronology of the War Against Christmas. This is Hollywood's first direct confrontation to Christmas, certainly not the last, and the efforts that follow will undoubtedly be more effective.

It only makes sense. First, we're forced to say "Happy Holidays" to "include" those sourpusses sulking in the Hanukkah and Kwanzaa  corner. Then, they take away our Christmas Break and substitute a Winter Holiday. In some more recent developments, no public Christmas tree is left standing, and the Dickens Christmas Festival in Saginaw, Michigan had to change its name to the Dickens Holiday Festival so the city could advertise in local schools.  (The word "Christmas" is banned in those schools.) I predict that in the future no "Holiday" movie will be free of overtly Christophobic indoctrination.

The thing I find really disturbing about the Golden Compass movie, (and it's even more conspicuous in the book) is not whether it's implicitly or explicitly challenging the formalities of Christianity, but that in a very subtle and kid-friendly way, it attacks the Christian lifestyle.

The whole story is extremely family-averse. After the movie was over, I discussed it with a 16-year old boy in my party (who, incidentally, has not read the book but is a first-class fantasy fan). He noted exactly this, albeit in teenage male grunt-speak. He was put off by the fact that Lyra seemed not to react when confronted with what realistically could only be emotionally jarring revelations her biological parents.

At the age of 11, Lyra is told that, not only were her parents not killed in an airship accident as she had been led to believe, but that they were both still very much alive—but uninterested in loving her as a daughter. Lyra is told this by her biological mother (whom Lyra has only briefly met and for whom she harbors no affection) along with the facts that Lyra is the product of an extra-marital affair and the man Lyra knows as her uncle is actually her biological father.

In the movie, Lyra is completely unaffected by either this news or its deliverer. As soon as her mother finishes talking, Lyra escapes, by a quick-thinking slight of hand, and the plot moves on, Lyra never once pausing to reflect on her family. And she never does.

Previous adolescent fantasy stories to which The Golden Compass is being compared have justice for the wicked and familial bonds as central themes. In The Chronicles of Narnia, a betraying brother must ask for forgiveness in order for good to win out over evil. But the question of forgiveness never crosses Lyra's mind. In the Harry Potter stories

stories, Harry is driven by the desire to know and understand his dead parents, grappling with their flaws and struggling to find meaning in their lives, eager to make them proud. But Lyra in The Golden Compass—both movie and book—literally never considers the question.

In the book, it is made clear that Lyra's parents both abandoned her in their separate pursuits of gaining extreme power: her father, by organizing an army to rebel against "The Authority" (Pullman's shorthand for God), and her mother, by teaming up with the oppressive Magesterium to control humanity on earth.  Lyra was initially left in a convent, but, as a character in the book explains, "Lord Asriel wouldn't stand for that. He had a hatred of priors and monks and nuns". So, in a move Pullman weighted with symbolism, Asriel swoops her out of the hands of the Church and drops her at Oxford, Pullman's alma mater, where she is to be raised by the scholars.

The Magesterium, in which Lyra's biological mother plays a significant role, is in the habit of kidnapping children and using them as guinea pigs in its "experimental theology". The experiments it runs involve cutting away what is essentially the soul of the kidnapped child, causing pain so great that it leads to insanity and often death, in order to preempt the destructive effects of "Dust", which in the book is described as the physical—though for the most part invisible—manifestation of Original Sin. (This is not at all clear in the movie).

Asriel and Lyra's mother (Mrs. Coulter—her name in the book, so Hollywood can be acquitted of an attack on Ann!) are on separate sides of the fight, father against the Magisterium, mother for. But both are, in effect, child murderers. As I mentioned earlier, in the book's final chapter, Asriel brutally rips away the soul of Lyra's best friend, killing him in order to harness its power for an experiment of his own. He literally uses a child's soul in death as fuel to build a bridge to another universe.

Lyra mourns momentarily the loss of her best friend. But she never stops to condemn her father for it. Never in the books does a character discuss or think about whether another character is good or evil—and Lyra's parents are just two of the story's many really evil characters.

But attacking the ideal Christian lifestyle is nothing new for Hollywood. I challenge readers to identify any significant children's movie in the past twenty years that feature a whole, happy family. Any parent persecuted by "children's" cable channels these days must agree—where there are parents (and often there are none), they are rarely married and almost always either idiotic or cruel.

Combine that with the notorious promiscuity, rudeness, self-centeredness and materialism that makes up most of what Hollywood emits, and one begins to wonder how It's a Wonderful Life was ever produced.

In short, The Golden Compass is implicitly but ineffectively Christophobic, an imaginative if sick book made into an unoriginal movie, with good special effect and bad cinematography. A shoot, and a miss.

My question: during the season when Christian families gather together to celebrate the Holy Family, wouldn't it make more sense to release a movie that actually has a family in it?