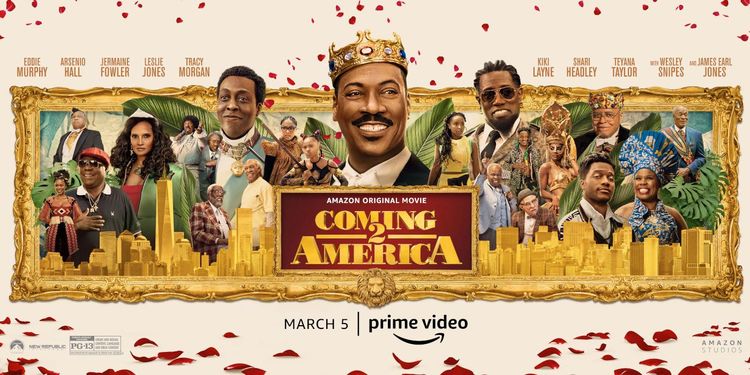 How do mainstream Hollywood movies portray the enormous phenomenon of post-1965 immigration?

To a remarkable degree, they just don't. No doubt many socially-conscious filmmakers dream of winning Oscars by exposing America's cruelty and racism toward hard-working, family-oriented workers whose only crime is that they don't happen to have any documents etc., etc. But remarkably few movies about modern immigration have actually been made.

Why not? Probably because there's simply no evidence that they'd make money. The general public appears either not interested or actively hostile.

I've spent several hours staring at a list of the 255 movies that have broken the $100 million mark at the domestic box office. The Ellis Island era did inspire some famous gangster movies about earlier immigrants. But only one of the 255 films with a nine-digit gross was about a modern immigrant: Eddie Murphy's sweet 1988 romantic comedy Coming to America, about an African prince who runs away from an arranged marriage to look for his future queen in (where else?) Queens.

Of course, in the end Murphy takes his African-American bride home to his fantasy kingdom. So maybe he isn't really an immigrant after all.

Easily the most popular movies about modern immigration—albeit in allegorical form—have been the two Men in Black comedies. They feature hard-nosed government agents whose job is to deal with illegal aliens who are really alien. (Tommy Lee Jones: There are approximately 1500 aliens in Manhattan. Will Smith: Cab drivers? Tommy Lee Jones: Not as many as you think.) The series' immigration-control subtext is brought to the surface in the very first scene of the original MIB: patrolling the Mexican border, Tommie Lee Jones arrests a group of illegal aliens sneaking into the U.S. and unmasks the extra-terrestrial hiding amongst them.

In effect, the MIB series asserts that immigration offers opportunities to the host nation (or planet) but also dangers that must be managed in an aggressive, no-nonsense manner.

In contrast, consider the dopey Alien Nation (I mean the 1988 movie, not Peter Brimelow's immigration book)[Peter Brimelow sighs: I have rotten luck with these publisher-imposed titles. My famous Canadian book was called The Patriot Game. It was distinctly overshadowed by Tom Clancy's simultaneous thriller Patriot Games] about uninvited extraterrestrial immigration to Earth.

It focused on how detective Jimmy Caan must overcome his racism (species-ism?) against the "Newcomers" who are taking over human jobs. One "Newcomer" is his new partner, alien detective Mandy Patinkin.

That lame PC message was no doubt a major reason Alien Nation made only 1/17th as much money as the MIB series.

Of course, Hollywood movies are full of moralizing in favor of diversity. But post-1965 immigrant groups—Hispanics and Asian—just don't seem to interest the people who make or watch hit movies.

Asians have gotten a few lead roles in $100 million movies: I come up with the wonderful Jackie Chan in the Rush Hour comedies, Lucy Liu in Charlie's Angels, Pat Morita in Karate Kid II, Michelle Yeoh in the James Bond flick Tomorrow Never Dies, and the entire cast of Crouching Tiger, Hidden Dragon. Embarrassingly, though, every single one of those roles involves kicking people. If Americans didn't like martial arts, they'd apparently never pay big bucks to see an East Asian star at all. (For whatever it's worth, the Disney animated films Mulan and Lilo and Stitch are about Asians or Pacific Islanders.)

The press has been trumpeting the arrival of Hispanics in the mainstream of American pop culture since that fine little movie La Bamba fifteen years ago. But according to box office figures, Hispanics still haven't arrived.

Among these top 255, I can identify only one film with a Hispanic-dominated cast: director Richard Rodriguez' fun children's fantasy Spy Kids.  (And that's assuming that its star Antonio Banderas, a Spaniard, qualifies as "Hispanic," a question that nobody in the government seems to be sure about.) The drug smuggling movie Traffic also had a number of strong roles for Hispanics.

According to the hit movie list, in our imaginations, America remains a white and black country. When American moviegoers think about "celebrating diversity," what they think about are films with black cops and white cops learning to overcome their differences as pursue the bad guys.

The black cop-white cop buddy movie genre goes back to the 1967 Best Picture winner In the Heat of the Night. It's gotten awfully creaky over the last 15 years. But the MIB, Lethal Weapon, and Beverly Hills Cop series, along with Wild Wild West and Seven take up nine spots on the $100 million dollar list. And there are a large number of other hit black/white movies like Jerry Maguire, Independence Day, Sister Act, The Green Mile, and Driving Miss Daisy.

I think the movie box office data explains a lot about why so little thought is given to immigration: Americans just don't find modern immigrants as interesting as they find African-Americans.

Consider affirmative action. No one ever defends racial and ethnic quotas for newly-arrived immigrants. The concept is just too absurd. But, no matter how ridiculous, that's the law today.

Quotas for blacks are probably a very bad idea. But because the number of African Americans is relatively limited, the country could arguably afford black quotas, just as it can afford giving American Indians a racial right to operate casinos. What we can't afford in the long run is continuing to tell five billion foreigners that they'll be given special privileges as soon as they show up here.

So you'd think that anti-quota activists would devote a lot of their fire to denouncing quotas for immigrants. But they almost never do. Instead, they keep ramming headfirst against affirmative action's strongest line of defense: the case for the special treatment of the descendents of American slaves.

Why? There are a lot of reasons, but one is that white Americans just find African Americans, pro or con, so much more interesting than the new immigrants.

It's our national obsession. Unfortunately, it's blinding us to the more significant changes that are happening now.