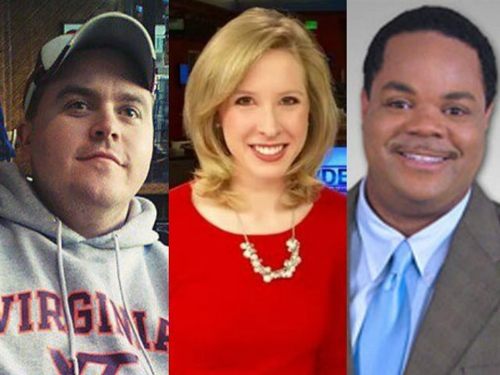 Nine days after the August 26 murders of WDBJ7 reporter Alison Parker and cameraman Adam Ward, Franklin County, VA Sheriff Bill Overton announced that he was withholding the manifesto that black homosexual killer Vester Lee Flanagan II faxed to ABC News after his crime [Investigators will not release Flanagan's manifesto, WDBJ7, last updated on September 5, 2015]. But the MSM focus on Sheriff Overton was a diversion tactic. The real question: why did ABC News itself not release the entire manifesto, instead of teasing everyone with drips and drabs of it? The media giant has not given any explanation—and the MSM has not demanded one.

This contrast glaringly with the immediate dissemination of Dylann Roof’s manifesto and the nation-wide witch-hunts triggered by its (very fleeting) mentions of the Council of Conservative Citizens and the Confederate Battle Flag. My assumption, in default of disproof: Flanagan’s manifesto contains something about blacks and/or homosexuals that our ruling class does not want Americans to know.

We do know, however, because it is obvious on its face, that the killings were not just another Disgruntled Minority Massacre—but also another downside of Affirmative Action. When Flanagan came to work at WDBJ7 in March 2012, it was at least his sixth full-time job in TV news. I have pieced together the following paper trail:

This is staggering. Although such jobs do not pay particularly well (Flanagan got paid $36,000 per year), they are glamorous, and thus among the toughest jobs to get in America, even for people with excellent credentials. But Flanagan had the worst credentials imaginable!

None of his former employers I contacted would offer any comment on Flanagan other than to confirm that fact of his employment. This is typical of modern personnel practices, driven partly by fear of lawsuits, and in this case also by Political Correctness. But it had lethal consequences.

It is quite clear that Flanagan was repeatedly fired for incompetence and viciousness to colleagues. Thus white former employers at WTWC (1999) and WDBJ (2012-2013) said Flanagan was the Employee from Hell, and one white former WTWC colleague, anchor Dave Leval, said he was angry because Flanagan had not changed a bit since they’d worked together.

“He just had a history of playing the race card. I know he did that in Tallahassee a couple of times…”

And yet, not only did Flanagan get interviews, he got hired again and again and again, and once he had revealed the content of his character, he got second, third, fourth and fifth chances at the same job. His last employer, WDBJ, actually gave him a severance package when he was fired. Flanagan thought it was too little and said “This is bullshit.” And he later murdered his former colleagues. [Virginia Shooter's Ex-Boss Tells of His 'Abrasive' Behavior, By Meghan Keneally, ABC, August 28, 2015]

Blair had been a serial plagiarist and fabricator since his days on his high school newspaper. But because he was black, white superiors—teachers, professors, editors—saw to it that every time he proved himself to be unfit, he failed upward. He was given the editorship of his college newspaper and internships at the nation’s most prestigious newspapers. The New York Times hired him as an intern, cub reporter, full-time reporter and, finally, promoted him to lead reporter of the team covering the racially-motivated D.C. Sniper murders. (Remember the DC Sniper murders? They were supposed to be by white supremacists but…weren’t).[The sniper's plan: kill six whites a day for 30 days, By Harry Mount, Telegraph (UK)May 22, 2006]

Had the NYT bothered to check out Blair’s resume, it would have learned that he had never even finished college! Mickey Kaus dubbed such institutionalized negligence “due diligence, diversity-style.”[Is Pinch A Cinch, Slate, May 2003] I call it, don’t ask, don’t tell.

Blair was eventually forced out by the NYT, not because he’d fabricated stories and libeled police officials, but because the San Antonio Express-News had complained about him plagiarizing its stories. Blair’s white Times benefactor, Executive Editor Howell Raines, admitted that he had ignored Blair’s failings because he was black. [The Jayson Blair Case: At the New York Times, the Spin Cycle Never Ends by Nicholas Stix, Toogood Reports, May 23, 2003.]

The time was ripe for ending Affirmative Action, but instead the opposite happened. The MSM closed ranks behind the PC fairy tale that the Jayson Blair Scandal had nothing to do with race.

When Jewish socialist Times Publisher “Punch” Sulzberger handed the reins of the paper to his Episcopalian 1960s-radical son “Pinch” in 1992, the younger man announced that “diversity”—not being America’s most accurate newspaper—was the “the single most important issue” facing his paper. And the NYT’s black Affirmative Action op-ed columnist, Bob Herbert, proclaimed that race had had nothing to do with the scandal:

Listen up: the race issue in this case is as bogus as some of Jayson Blair’s reporting.

But the folks who delight in attacking anything black, or anything designed to help blacks, have pounced on the Blair story as evidence that there is something inherently wrong with The Times’s effort to diversify its newsroom, and beyond that, with the very idea of a commitment to diversity or Affirmative Action anywhere.

And while these agitators won’t admit it, the nasty subtext to their attack is that there is something inherently wrong with blacks.

(Of course Herbert would never admit that Affirmative Action assumes that “there is something inherently wrong with blacks”—it always entails hiring inferior people based on their race, ethnicity, sex and/or sexuality.)

There’s a real shortage of black reporters, editors and columnists at The Times. But the few who are here are doing fine and serious work day in and day out and don’t deserve to be stigmatized by people who can see them only through the prism of a stereotype.

(But they owed their jobs entirely to being seen “through the prism of a stereotype”!)

The problem with American newsrooms is too little diversity, not too much. Blacks have always faced discrimination and maddening double standards in the newsroom, and they continue to do so….

So let’s be real. Discrimination in the newsroom… is a much more pervasive problem than Jayson Blair’s aberrant behavior. A black reporter told me angrily last week, ‘After hundreds of years in America, we are still on probation.’

Herbert’s screed could just as well have been written by Vester Flanagan. And Flanagan did, indeed, take Herbert’s advice and “strike back.”

Pinch Sulzberger remains the most influential figure in American journalism. Following his lead, the MSM and the university journalism schools that act as their feeders doubled down on Affirmative Action.

Already in 2003, there were thousands of race-obsessed black newsroom enforcers like Bob Herbert, as well as white man-hating feminists, militant homosexuals, and racist Reconquistas.

Today, there are many more—and normal, patriotic white male journalists are almost non-existent in the MSM.

And in 2015, as in 2003, the MSM immediately closed ranks on the “this-had-nothing-to-do-with-race” fairy tale. Thus Flanagan was a general purpose psycho, an “injustice collector,” according to the “expert” theory du jour: “Injustice collectors hate everyone,” as The New Republic’s Dave Cullen wrote. [The "Injustice Collectors": How to Understand Vester Flanagan’s Grievance-Filled Manifesto, August 31, 2015.]

Then how come Vester Flanagan only shot whites?

But the plain fact is that Flanagan’s known behavior as a colleague was not that unusual for a black. I have worked in many black-dominated offices in New York City, public and nominally private. Already during the 1980s I found racially-motivated black workplace violence, in terms of both threats and actual physical assaults, to be common. (See Dispatches From The Go-Slow Zone, by John Ingram, American Renaissance, August 2006). The only peculiarity in the Vester Flanagan Saga is that, in my experience, the violent black colleagues were all females. Many black women think they have a birthright to assault whites, including white colleagues, and do so whenever they feel like it.

No one in the MSM has reported Richard Lynn’s demonstration that psychopathy has a much higher prevalence among blacks than any other group. [Race and Psychopathic Personality American Renaissance, July 2007] The central characteristic of psychopathy is a complete lack of conscience. But discussing black psychopathy is, like honesty about any black pathology, a firing offense in the MSM, academia, the schools… everywhere.

The greater prevalence of black psychopathy must be at least partly genetic. However, there must also be a social component. Otherwise, its expression would be constant over time.

Beginning in the 1960s, America saw an explosion in black violent crime way beyond the increase in blacks’ proportion of the population. This development has been masked by a combination of institutionalized statistical fraud by law enforcement, the revolution in trauma medicine, and by MSM corruption. However, anyone who has read my work, or that of Colin Flaherty or Justin Cottrell, or who is among the millions of whites and Asians living under siege, knows the fact.

The explanation: for the past 50-odd years, blacks have been encouraged by the ideologies of racial socialism and black supremacism, and practices such as de-policing and criminal justice Affirmative Action, to engage in racially-motivated violence against whites.

The Obama Administration’s War On Whites has merely taken this process to its highest stage—to date.