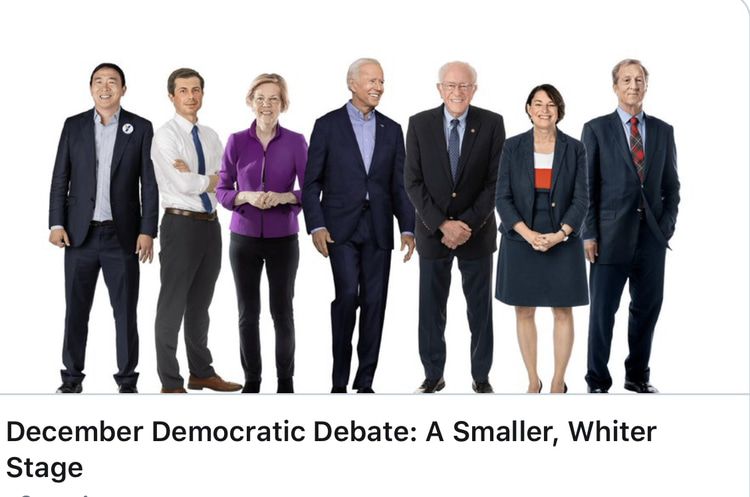 Above, the NYT says that the debate has only one non-white candidate (Yang) which means they've stopped believing in Warren's Indian ancestry.

Loyola Marymount is one of the largest Roman Catholic universities in the country (enrollment: 9800), opened in 1865.

One wondered what LMU's founders might have thought as daughters of Haitians and Pakistanis led the questioning on issues such as citizenship for the untold millions living in the country illegally, reparations to costly African Americans, and the plight of transsexuals.

Billionaire Steyer, who spent millions to promote the impeachment of President Donald Trump beginning in 2017, said the president is against immigration by non-white people:

He described the president as "break[ing] the laws of humanity in our name."

Andrew Yang emphasized, "Immigrants make our country stronger and more dynamic. And immigrants are being scapegoated for issues that they have absolutely nothing to do with."

Then he inadvertently made the argument to end unskilled immigration:

"If you go to the factory in Michigan, it's not wall to wall immigrants. It's wall to wall robot arms and machines," Yang said.

Alcindor asked Klobuchar: "What do you say to white Americans who are uncomfortable with the idea of becoming a racial minority, even if you don't share their concerns?" 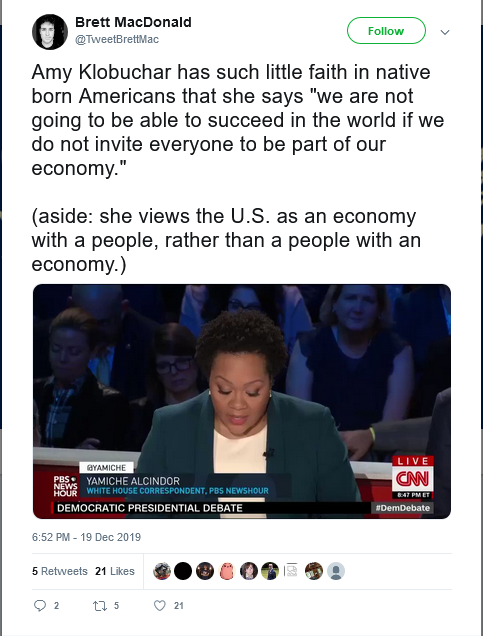 As Klobuchar answered, there was light applause. She said:

I say this is America. You're looking at it. And we are not going to succeed in the world if we do not invite everyone to be part of our economy.

Planners in the executive suites at Mitsubishi had reason to chuckle. Indigenous Japanese engineers have introduced ships, automobiles, electronics, and other products to the US marketplace for more than a century.

Discerning viewers had to wonder: "What wisdom and services do newcomers from El Salvador, Vietnam, and Somalia provide anyway?"

Brooklyn-born Sanders provided the best histrionics of the evening. Once a mild immigration skeptic, Sanders has moved left with his party. With arms flailing, Sanders promised:

Day one, day one, we introduce bipartisan legislation which will, in fact, be comprehensive, which will result in a path to citizenship for the 11 million who are undocumented. That is what the people of our country want.

Sanders discussed generous health benefits for all—i.e. including unlimited illegal and legal immigrants— with nothing said of the burden to taxpayers. Pledges on climate concerns disregarded the depletion of natural resources in a country projected by many demographers to climb north of 1,000,000,000 by 2080. 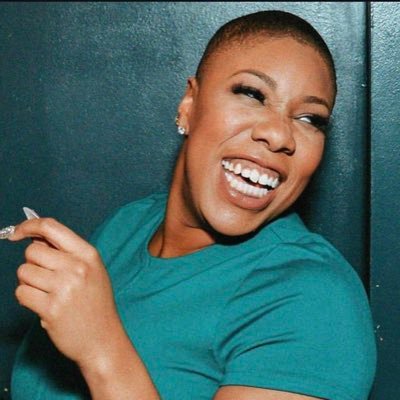 Jessica Levinson of LMU's law school told The Guardian, "The debates really have become auditions for viral moments. Did they have a breakout 30 seconds somewhere that we can play over and over?"[ Democratic debate: seven candidates to face off a day after impeachment, by Sam Levin, December 19, 2019]

Symone Sanders [Tweet her], pictured right, who transitioned from support for Bernie Sanders in 2016 and is now described as a key advisor to Biden, told KNBC-TV4 in Los Angeles that the former vice president had such a moment.

"Number one, the reason we're the country we are is because of immigration. We've been able to cherry pick the best of every single continent," Biden claimed.

They are the future of America and we should invest in them. Everybody will benefit from it, every single American. And you should get used to it. This is a nation of immigrants. That's who we are.

Biden's insistence that the US receives only the best from each continent may be true of Antarctica. Climatologists at the foreign scientific stations know generous funding is available in the US, and over time some become American citizens.

Of the remaining six continents, many foreign governments happily export their impoverished surplus to the US every year.

Should any of the seven Democrats debating in Los Angeles take up residence in in the White House on January 20, 2021, that's sure to increase.