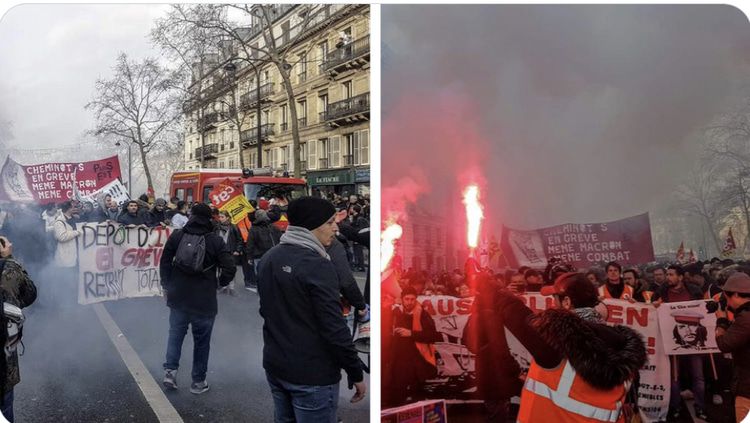 As that rail and subway strike continued to paralyze travel in Paris and across France into the third week, President Emmanuel Macron made a Christmas appeal to his dissatisfied countrymen:

"Strike action is justifiable and protected by the constitution, but I think there are moments in a nation's life when it is good to observe a truce out of respect for families and family life."

"The public be damned!" seems to be the attitude of many of the workers who are tying up transit to protest Macron's plan to reform a pension system that consumes 14% of GDP.

Macron wants to raise to 64 the age of eligibility for full retirement benefits. Not terribly high. And to set an example, he is surrendering his lifetime pension that is to begin when he becomes an ex-president.

Yet, it is worth looking more closely at France because she appears to be at a place where the rest of Europe and America are headed.

In France, the government collects 46% of the GDP in taxes and spends 56% of GDP, the highest figures in the Western world.

And Paris appears to be bumping up against the limits of what democratic voters will tolerate in higher taxes, or reductions in benefits, from the postwar welfare states the West has created.

A year ago, when Macron sought to raise fuel taxes to cut carbon emissions, the "yellow vests" came out in protests that degenerated into rioting, looting, arson, desecration of monuments and attacks on police.

Paris capitulated and canceled the tax.

How do we compare?

The U.S. national debt is now larger than the GDP. Only in 1946, the year after World War II, was U.S. debt a larger share of GDP than today.

In 2019, the U.S. ran a deficit just shy of $1 trillion, and the U.S. government projects trillion-dollar deficits through the decade, which begins next week. And we will be running these deficits not to stimulate an economy in recession, as President Obama did, but to pile them on top of an economy at full employment.

In short, we are beginning to run historic deficits in a time of prosperity. Whatever the economic theory behind this, it bears no resemblance to the limited government-balanced budget philosophy of the party of Ronald Reagan.

The questions the U.S. will inevitably face are the ones France faces: At what point does government consumption of the national wealth become too great a burden for the private sector to bear? At what point must cuts be made in government spending that will be seen by the people, as they are seen in France today, as intolerable?

While a Republican Congress ran surpluses in the 1990s, when defense spending fell following our Cold War victory, Dwight Eisenhower was the last Republican president to run surpluses.

Opposition to new or higher taxes appears to be the one piece of ground today on which Republicans will not yield. But if so, where are the cuts going to come from that will be virtually mandated if U.S. debt is not to grow beyond any sustainable level?

Deficits are projected to run regularly in the coming decade at nearly 5% of GDP while economic growth has fallen back to 2%.

With taxes off the table, where, when and how do we cut spending?

Or does each new administration kick the can down the road?

The five principal items in the federal budget are these:

Medicare, Medicaid, Obamacare and other health programs account for another fourth of the budget. All will need more money to stay solvent.

Yet, while defense's share of GDP is among the smallest since before World War II, U.S. commitments are as great as they were during the Cold War. We are now defending 28 NATO nations, containing Russia, and maintaining strategic parity. We have commitments in Iraq, Syria, Afghanistan and the global war on terror. We defend South Korea and Japan from a nuclear-armed North Korea and China.

Yet another major item in the budget is interest on the debt.

And as that U.S. debt surges with all the new deficits this decade, and interest rates inevitably begin to rise, interest on the debt will rise both in real terms and as a share of the budget.

Again, is France the future of the West?