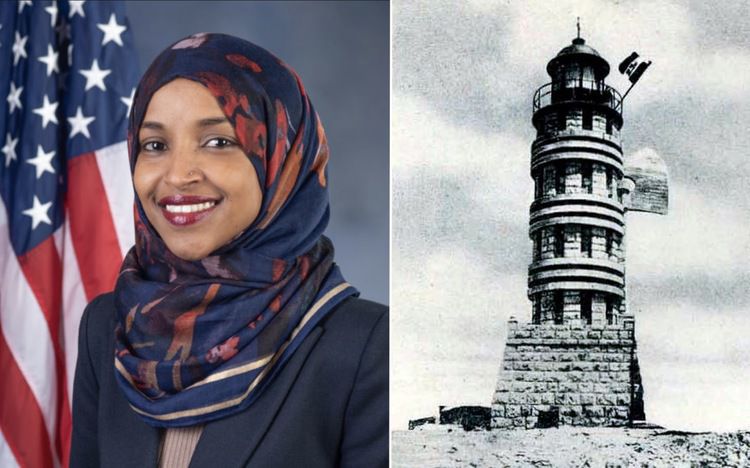 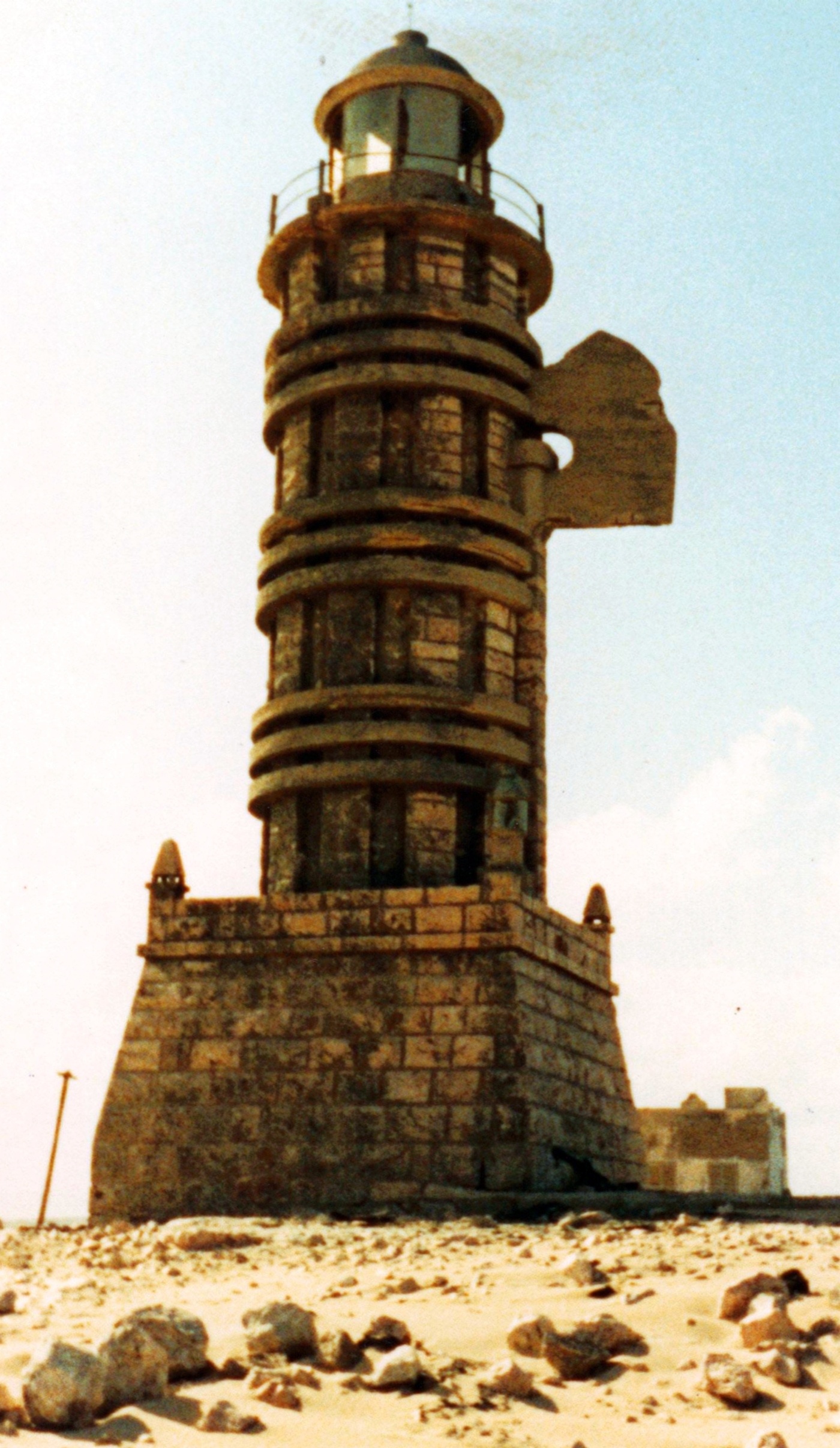 So it all ties together in a cosmic (or comic) lattice of coincidence, Plate of Shrimp-style.

Somalia has some interesting lighthouses, like this one, the Lighthouse Francesco Crispi*, erected by Mussolini’s Fascist regime in 1930 on the Horn of Africa’s “Fascist Coast.” It was built to look like a fasces and axe blade.

The more I try to read up on Rep. Omar’s life, the more it all seems like a sequel to Evelyn Waugh’s 1930s novels about Ethiopia, Black Mischief and Scoop.

Here’s what the poor lighthouse looked like in 2013, with its light gone, without Grandpa Omar in charge.

So maybe the Omars really were model civil servants and Somalia is a ruin without them?

* Crispi, by the way, was the mustachioed Italian prime minister whose career ended in 1896 when the first Italian invasion of Ethiopia was crushed by the Emperor Menelik at the Battle of Adwa.

So was naming the Somali lighthouse after the invader of Ethiopia popular in Italian Somaliland? It’s hard to tell.

Rep. Omar’s grandfather’s old boss, the dictator Siad Barre, got his start as a policeman under the Italian Fascist colonial regime of Italian Somaliland, and likely served in the Second Italian Invasion of Ethiopia in 1936. Then he rose up the cop ranks in British Somaliland.

After WWII he was in the pro-colonialist party and studied at Police School in Italy. Later on he became a Marxist-Leninist and Somalia was an ally of the Soviet Union after he came to power in a 1969 coup.

Reading up on Somali history and the dictator’s ideology:

Barre assumed the position of President of Somalia, styled the “Victorious Leader” (Guulwade), and fostered the growth of a personality cult with portraits of him in the company of Marx and Lenin lining the streets on public occasions.[19] Barre advocated a form of scientific socialism based on the Qur’an and Marxism, with heavy influences of Somali nationalism.

it’s clear that Siad Barre was one of the models for the Marxist-Islamist dictator in John Updike’s prodigious 1978 novel The Coup:

The average life expectancy in Kush is thirty-seven years, the per capita gross national product $79, the literacy rate 6%. The official currency is the lu. The flag is a plain green field. The form of government is a constitutional monarchy with the constitution suspended and the monarch deposed. An eleven-man Suprême Counseil Révolutionnaire et Militaire pour l’Émergence serves as the executive arm of the government and also functions as its legislature. The pure and final socialism envisioned by Marx, the theocratic populism of Islam’s periodic reform movements: these transcendent models guide the council in all decisions. SCRME’s chairman, and the Commander-in-Chief of the Armed Forces, Minister of National Defense, and President of Kush was (is, the Statesman’s Year-Book has it) Colonel Hakim Félix Ellelloû—that is to say, myself.

In July 1976, Barre’s SRC disbanded itself and established in its place the Somali Revolutionary Socialist Party (SRSP), a one-party government based on scientific socialism and Islamic tenets. The SRSP was an attempt to reconcile the official state ideology with the official state religion by adapting Marxist precepts to local circumstances. Emphasis was placed on the Muslim principles of social progress, equality and justice, which the government argued formed the core of scientific socialism and its own accent on self-sufficiency, public participation and popular control, as well as direct ownership of the means of production. While the SRSP encouraged private investment on a limited scale, the administration’s overall direction was essentially communist.[16] …

Additionally, Barre also sought to eradicate the importance of the Somali clan system (qabil) within Somalia’s government and civil society. The inevitable first question that Somalis asked one another when they met was, ‘”What is your clan?”, but when this was considered to be against to the purpose of a modern state, Somalis began to pointedly ask, “What is your ex-clan?”. Barre outlawed this question and a broad range of other activities classified as “clanism”, with informers reporting qabilists, those considered to propagate the clan system, to the government, leading to arrests and imprisonment.

But in late 1977, Barre decided to follow in the footsteps of Crispi and Mussolini and invade Ethiopia, now a fellow Communist country (Ras Tafari having been smothered). The Soviet Union chose to back more populous Ethiopia and Somalia was defeated. Siad Barre then switched to being a U.S. ally, including promising to pay Paul Manafort a million dollars per year to lobby for Somalia in D.C.

Lots of bad stuff ensued including the Isaaq Genocide. The elderly Siad Barre was finally overthrown in early 1991, at which point, Rep. Omar’s neighbors tried to murder her family. They fled to Kenya and eventually arrived in Minneapolis. And the rest is, as Marx might have said, less history than farce.

Here’s a 1977 NYT article on the ideological climate promulgated by the regime under which Rep. Omar’s family flourished:

MOGADISHU, Somalia—Two years ago, when it was pressing a campaign to emancipate women, the Somali Government was vexed to find conservative religious leaders preaching against equality of the sexes and supporting their arguments with readings from the Koran.

It decided to stop the dissent. Eleven of the religious leaders were rounded up, and early one morning they were executed by firing squad. Three hours later two Soviet‐supplied MIG’s, flying above a new national monument, brushed wings and went down in twin spirals of smoke and flames.

“There wasn’t a person in Mogadishu who thought it was a coincidence,” one Somali recalled. “It was a sign from heaven. Allah was angry.”

The episode underscores the peculiar position of Somalia, a nation of almost four million people, the majority of them nomads, as it struggles to move into the modern world under the banners of both Islam and Marxism.

The attempt to straddle, if not to merge. the two is the most striking feature of the Government of President Mohammed Siad Barre. who took power from a corrupt and fragmented civilian regime in a bloodless coup eight years ago and has securely ruled the country since.

Under his leadership Somalia became the only non‐Arabic speaking nation to join the Arab League and also the first country in black Africa to sign a treaty of friendship and cooperation with the Soviet Union. Now, with the fighting in Ogaden, the eastern third of Ethiopia that Somalia wants to annex, Somalia stands out among African countries in its refusal to accept inherited colonial boundaries and its readiness to press territorial claims against a neighboring country.

A third potent force in the country’s collective consciousness—nationalism—is expressed in the vision of a “greater Somalia” that would unite all Somalia speaking peoples spread through three other countries in the Horn of Africa.

President Siad Barre has often insisted that Marx and Mohammed are not only compatible but also complimentary, that the religious asceticism of Islam can combine with the concept of mass discipline inherent in “scientific socialism” to forge a strong national will and lift the country from the ranks of the 25 poorest nations.

… “There is no chapter, not even a single word, in our Koran that opposes scientific socialism. We say, ‘Where is the contradiction? The contradiction was created by man only.’”

To the outside parties closely involved in the developments on the Horn of Africa, however, the contradiction, in geopolitical terms, seems real indeed.

Saudi Arabia, the main source of money among conservative Arab nations contesting Soviet influence along the Red Sea, is exerting pressure upon Mogadishu to break its ties with Moscow, playing upon Arab solidarity.

The Soviet Union, at the same time, is trying to persuade Somalia to curb its nationalism in the interests of international Marxist brotherhood. If this is done, in Moscow’s view, then a settlement can be reached with Ethiopia, an ancient enemy that is largely Christian but is now also Marxist, and a federation can perhaps be formed along the strategic Horn of Africa based upon ideological affinities, instead of religious and cultural ones. …

In Somalia, where there were only four factories at independence in 1960, scientific socialism is laboring to take root in a pre‐industrial society. It has meant mostly the mobilization of collective labor to build Chinese-style “self-help.”

Many of these projects are impressive, ranging from street‐cleaning brigades that have made Mogadishu one of the cleanest cities in Africa

Uh-oh, being against littering seems kind of racist in the Current Year.

to construction crews in the northern city of Hargeisa that have built a new national theater and cultural complex.

But about 6G percent of the population is still nomadic or semi‐nomadic and, following a 1,000‐year‐old routine of driving camels from waterhole to pastureland, remains immune to centralized control. Authoritarian tendencies are tempered by the individualism of desert life.

Several years ago the Government tried to restrict the chewing of khat, the narcotic weed whose daily consumption eats up the income of most Somali wage‐earners. The effort failed, because khat is so much a part of daily life. …

Soviet diplomats here have complained privately that the country’s socialism is only skin‐deep and that for the Somalis religion takes precedence.

“The Somalis are very devout Moslems,” a Pakistani diplomat said. “When you go into a mosque, it is always crowded. You see a lot of young people, and some of them are even crying while praying.”

Although some of the precepts of the Koran, such as the sanctity of private property, are glossed over in the preachings, there is still a residue of conservative thinking, which shows itself in the endurance of such customs as infibulation, a traditional operation performed upon adolescent girls that combines clitoral circumcision with the surgical equivalent of a chastity belt.

Infibulation, which insures the virginity of prospective brides, is a form of subjugation contrary to the policy of equal rights for women, but the Government appears reluctant to condemn it outright. Estimates are that 90 percent of teen‐age girls in Somalia still undergo the operation.

“Somalia is a country of three M’s: Marx, Mohammed and the Mad Mullah,” a Western diplomat said, using the British nickname for Sayid Mahammed Abdulla Hassan, the Somali nationalist leader of half a century ago. “I leave it to you to decide which ‘M’ is the most powerful.”