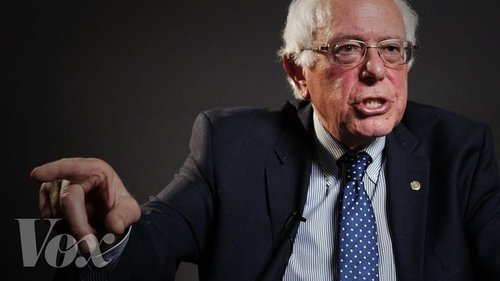 It’s very good news that GOP presidential contender Rick Santorum repeated in the “undercard” debate this evening that he wants to reduce legal immigration by 25 percent to benefit American workers. Paradoxically, from the other side of the political spectrum, Democratic Presidential candidate Bernie Sanders is also aware of this labor market argument. Asked by Vox.com’s Ezra Klein about an “open borders” policy for the U.S., Sanders shot back:

Open borders? No, that's a Koch brothers proposal. That's a right-wing proposal, which says essentially there is no United States…It would make everybody in America poorer —you're doing away with the concept of a nation state, and I don't think there's any country in the world that believes in that.

If you believe in a nation state or in a country called the United States or UK or Denmark or any other country, you have an obligation in my view to do everything we can to help poor people. What right-wing people in this country would love is an open-border policy. Bring in all kinds of people, work for $2 or $3 an hour, that would be great for them. I don't believe in that. I think we have to raise wages in this country, I think we have to do everything we can to create millions of jobs.

You know what youth unemployment is in the United States of America today? If you're a white high school graduate, it's 33 percent, Hispanic 36 percent, African American 51 percent. You think we should open the borders and bring in a lot of low-wage workers, or do you think maybe we should try to get jobs for those kids?

I think from a moral responsibility we've got to work with the rest of the industrialized world to address the problems of international poverty, but you don't do that by making people in this country even poorer.

At least for this Democratic candidate, labor solidarity stops at the border—as it did for Samuel Gompers.

Vox’s Klein greeted Sander’s comments with obvious shock and horror. And the very next day, his colleague Dylan Matthews rushed in to stamp out any potential Democratic deviationism with the usual slur: Bernie Sanders's fear of immigrant labor is ugly — and wrongheaded, July 29 2015.

Matthews is proud of his views:

If I could add one amendment to the Constitution, it would be the one Wall Street Journal editorial page editor Robert Bartley once proposed: "There shall be open borders." There is no single policy that the United States could adopt that would do more good for more people.” [Links in original]

Bartley a raging populist? His Wall Street Journal a Leftist rag pushing for spread the wealth policies? Who da thunk it?

But being obviously ignorant of the economics of immigration, like so many fashionable journalists, Matthews had to turn to someone called David Roodman to justify his prejudices (“summarizing the literature on immigration and native-born workers”). Needless to say, Roodman [Email him] told Matthews what he wanted to hear. Hint to Matthews and Roodman: read VDARE.com, we’ve been covering this technical issue for fifteen years.

We know that immigration grows GDP. But what does it do to per capita GDP? If the entire country of Mexico were to emigrate to the U.S. our GDP would increase, but many of us in the bottom 99% would be fighting each other for scraps of bread. The influx of low skilled immigrants would reduce per capita GDP—which, at the end of the day, is the best measure of living standards.

At least some people realize that virtually all that GDP growth is captured by the immigrants themselves. But native-born American workers, folks who derive income from wages rather than capital gains, dividends, rents and other types of “unearned income,” are the immigration losers. And the losers vastly outnumber the gainers.

The major effect of immigration is not that it creates new income for the native-born, but that it redistributes income from labor to capital by competing down wages.

Matthews: “… Even according to George Borjas, the single most-cited anti-immigration economist, immigration doesn't make the existing workforce worse off on average. But it does, he claims, most likely reduce wages substantially for people lacking high school degrees.” Link in original.

Wrong. Borjas’ latest paper on this [Immigration and the American Worker: A Review of the Academic Literature, CIS, April 2013.] estimates the current “immigration surplus” to about $35 billion, or a miniscule 0.24% of GDP. This is not a gain to workers. In fact, this fairly modest surplus is the difference between an enormous $437 billion gain accruing to American employers and a slightly less enormous $402 billion wage loss suffered by native-born American workers.

Three factors influence Borjas’ immigration surplus calculation: The negative wage elasticity implies that immigrant and native-born American workers of similar education and skill levels are substitutes for each other, so that an increase in the supply of one group reduces the demand for, and wages of, the other. To most economists, this is a self-evident truth.

By claiming Borjas thinks otherwise, Matthews (or Roodman) is either misreading him or deliberately misrepresenting his conclusions.

A negative wage elasticity is key to the immigration surplus. Borjas writes:

The formula for the immigration surplus contains another important insight: The gains from immigration are intimately linked to the wage loss suffered by workers. Ironically, the United States gains more from immigration the greater the drop in the wage of workers who compete with immigrant labor.

[Immigration and the American Worker: A Review of the Academic Literature, CIS.org,April 2013]

Immigrants who entered the country from 1990 to 2010 reduced the average annual earnings of American workers by $1,396, according to Borjas. The wage losses incurred by the least-educated native-born workers are, in percentage terms, more than double those of the highly-educated. But all strata of labor lose income from immigration.

Matthews claims that Borjas’ theoretical results are controverted by real world experience. For example: “The Mariel boatlift, when Cuba unexpectedly sent 125,000 people to Florida, did not hurt employment or wages among native workers in Miami at all.”

Mariel was one of those phenomena which economists dream about: a “natural experiment” in which cause and effect are clear. Nothing about conditions in the Miami labor market induced the Cubans to emigrate; they simply left when they could and settled in the city that was closest and most familiar.

And when economist David Card compared post Mariel Miami with the labor markets in four cities—Tampa, Atlanta, Houston and Los Angeles — that hadn't been inundated by immigrants – he found Miami actually did do better. Wages rose more, and unemployment fell more, than in the control cities.

Card’s conclusion: “The Mariel influx appears to have had virtually no effect on the wages or unemployment rates of less-skilled workers." [The Immigration Equation, By Roger Lowenstein, The New York Times, July 9, 2006.]

BUT—George Borjas has pointed out that localized studies like Mariel are flawed, for the simple reason that labor markets in the U.S. are linked together. When the Cubans moved in, U.S.-born Miamians moved out, depressing wages in their destination city. In this way the bad effects of Cuban immigration were diffused throughout the country, while the benefits remained in Miami. (Card also ignored one very large economic elephant in the Miami economy’s room: the huge Miami Vice era cocaine trade.)

Borjas notes that this is exactly what happened in California in the 1970s, when Mexicans began entering in large numbers and natives began leaving.

Matthews concludes by reverting to emotion: “Taking the idea that all people are created equal seriously entails supporting open borders.”

Of course, this claim is mistaken even on its own terms. An Open Borders policy makes matters worse for the world’s poor by giving their governments an excuse to ignore the plight of their own people—as we see in the case of Mexico.

But the Sanders-Matthews clash is more evidence of an emerging development: Open Borders loonies are coming out of the closet. As VDARE.com Editor Peter Brimelow recently put it, they are increasingly saying

that national identity simply doesn’t matter.  And, of course, the interests of ordinary Americans (or of any ordinary citizen of the great nations of the First World) simply don’t matter, either.