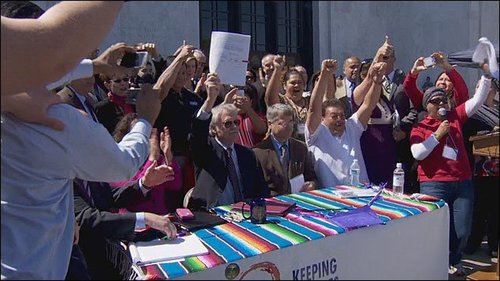 Richard LaMountain
A+
|
a-

Last year, voters in the supposedly “blue” state of Oregon overturned the illegal-alien driving privileges the state's Democratic legislature and governor had approved in 2013. To capitalize on that victory, Oregonians for Immigration Reform (OFIR), the group that spearheaded the effort, has launched an ambitious new endeavor to require larger businesses to verify the legal presence of their employees by using E-Verify. If successful, this initiative could force a substantial decline in Oregon's illegal-alien population and fuel the national surge in immigration-patriot sentiment sparked by the presidential candidacy of Donald Trump.

OFIR already has a proven track record and ability to overcome formidable odds. Consider its first victory over “driver cards” for illegal aliens.

In late April 2013, by a better than two-to-one margin (Senate: 20-to-7; House: 38-to-20), Oregon's state legislature passed Senate Bill 833, which implemented "driver cards" for illegals. On May Day, before hundreds of cheering illegal aliens and their advocates, then-Gov. John Kitzhaber signed the bill.

However, OFIR immediately announced it would seek, via citizen-initiated referendum, to give Oregon voters the chance to overturn the bill in the 2014 general election. To this end, over the next five months, hundreds of activists affiliated with OFIR's "Protect Oregon Driver Licenses" project worked to collect the 58,142 voter signatures required to refer the bill to the ballot. By early fall, they had succeeded.

A year of campaigning ensued. Modestly funded and therefore unable to undertake an aggressive television and radio campaign, OFIR's grassroots patriots drummed up voter support via old-fashioned retail politicking. Volunteers addressed civic and political groups, wrote newspaper commentaries and Letters To The Editor, and manned literature booths at gun shows, state and county fairs, and other events. In one of the campaign's best-attended functions, Derek Hernandez, then Western Regional Vice President of the National Border Patrol Council, addressed volunteers and led an anti-driver-card rally along one of Salem's busiest boulevards.

Driver-card forces, led by the so-called "YES for Safe Roads" committee—significantly, a name that avoided specifying for whom the cards were intended—amassed endorsements from elected officials, civic organizations, labor unions, faith groups, and the farm, nursery and restaurant lobbies whose members benefit most directly from illegal, low-wage labor. (By contrast, the only major group that formally opposed driver cards was the Sheriffs of Oregon Political Action Committee.) To fund their campaign, the YES Committee collected more than $500,000 in contributions—including $50,000 from actress Eva Longoria's "Latino Victory Project"—surpassing opponents' intake by a ten-to-one margin.

In other words, two-thirds of Oregon's ballot-casting citizens had rejected the illegal-alien driver cards that two-thirds of their state legislators had approved and that countless Establishment officials and institutions had supported—as clear a demonstration of the elite-vs.-people divide on immigration as has been seen in modern-day politics.

For OFIR activists, the win was immensely satisfying. Still, their elation was tempered. Impressive as it was, theirs was a defensive victory. It prevented the implementation of a measure that would have drawn more illegal aliens to their state—but did not enact any new measures that would induce illegal aliens already there to leave.

To that end, however, they now had concrete evidence of two things:

In strategy sessions in late 2014 and early 2015, OFIR's board of directors determined upon an ambitious new goal: to seek to place onto the 2016 general-election ballot a measure to require Oregon employers with five or more employees to verify their new hires' U.S. legal presence via the federal E-Verify system.

To craft the measure, OFIR worked with attorneys from the Immigration Reform Law Institute as well as an Oregon-based attorney, who modeled its text on South Carolina's mandatory E-Verify law—a law which, to date, has withstood all legal challenges.

OFIR's reasoning behind an E-Verify initiative was simple. If E-Verify were mandated for the state's employers and their job applicants vetted for lawful U.S. presence, jobs held by illegal aliens, once vacated, would be filled by legal workers. Newly-created jobs would go to legal workers immediately. Within a few years, the state's U.S. citizens and legal residents—of whom, currently, almost 120,000 still are unemployed—would hold the overwhelming majority of Oregon jobs.

And if they weren't able to get Oregon jobs, OFIR's board reasoned, substantial numbers of the state's illegal aliens would leave—and illegal aliens elsewhere would choose to stay away.

For evidence, OFIR looked at what mandatory E-Verify helped do for Arizona. After that state implemented mandatory E-Verify in 2007, notes the Federation for American Immigration Reform, its illegal-alien population "declined by about 100,000 between 2008 and 2009, or about 18 percent." If Oregon voters could be convinced to mandate E-Verify, OFIR's board concluded, the same could happen in their state.

At the annual state fair this fall, OFIR volunteers collected the 1,000 "sponsor signatures" the Oregon Secretary of State's Elections Division needed to set the E-Verify initiative in motion. The next step was for the Attorney General to craft a 15-word draft ballot title, Yes and No statements and a summary statement for the remaining signature petitions that will summarize what the initiative, if enacted, will do.

The draft ballot title and language for the E-Verify initiative petition were unacceptable to OFIR and its attorneys, so the group now moves into the "comments" period. Attorneys must justify any challenges to the language used by the Attorney General. State statute is frequently cited in the challenge language. Late last week, OFIR's comments were submitted for review by the Attorney General, who will review all comments submitted by all parties and then release a certified ballot title. If OFIR finds that unacceptable, the state Supreme Court can then be accessed for help in resolving the dispute over the language.

Once everything is approved OFIR will work to collect the remaining signatures, totaling 88,184, that it will need by July 2016 to qualify the initiative for the ballot.

If OFIR succeeds in this, its in-state polling shows the measure stands a good chance of passage on Election Day. And to that end, the group has secured pledges of initial financial support from immigration patriots both inside and outside Oregon.

But OFIR isn't stopping there. In addition to the E-Verify initiative, the group is working to qualify a measure to make English Oregon's official language and thereby put a brake on the proliferation of state- and local-government business conducted in foreign languages.

As outlined in its text, the initiative's main purpose is this: to stipulate that "no law, ordinance, decree, program, or policy of this state or any of its subdivisions shall require the use of any language other than English for any documents, regulations, orders, transactions, proceedings, meetings, programs or publications" (with several exceptions that include "to protect the public health or safety" and "to protect the rights of criminal defendants and victims of crime").

As with E-Verify, OFIR has collected 1,000 sponsor signatures and advanced the measure to the title-writing phase.

Here, however, the group has hit a snag.

The initial draft ballot title from the Attorney General's office had explained the initiative adequately: "Requires government actions/communications in English (with specified exceptions); limits laws allowing non-English documents/services." But, after complaints by the American Civil Liberties Union and others during the comment period, the Attorney General altered the title to come up with this gibberish for the remaining signature petitions:

OFIR has appealed to the state Supreme Court, asking that it reject the Attorney General's certified ballot title in favor of one that clearly delineates the initiative's purpose.

If OFIR wins the appeal, it will proceed with the initiative; if not, the group will move forward with the E-Verify measure alone.

And with this, OFIR moves into autumn and the crucial remaining year before Election Day 2016. In October in Salem, the group kicked off the stretch run with its annual "Pizza and Politics" event attended by about a hundred of the state's premier grassroots activists. President Kendoll outlined the two initiatives' progress and made a pitch for help in the coming year. Attendees heard as well from state representatives Mike Nearman (an OFIR board member) and Greg Barreto, who spoke about the past legislative session. And they heard from Oregon Republican Party chairman Bill Currier, whose executive committee and many core precinct-level activists strongly support OFIR's initiatives and will be of great help in the coming campaign.

Stay tuned for another Oregon dispatch early in the New Year.

And in the meantime, for up-to-date news, visit OFIR's website And—should you find opportunities for meaningful action lacking in your own states—OFIR invites you to lend your time and talents to help us wage the fight in our corner of the nation.