The Stupid Party In Oregon—Can't Someone Please Put The Republican Party Out Of Its Misery? 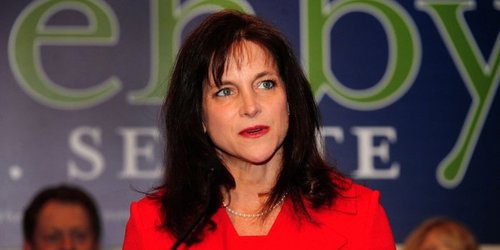 Allow me to introduce Monica Wehby, who is challenging incumbent Oregon Senator Jeff Merkley, a Democrat of course, in the November election.

Merkley's grade on immigration from NumbersUSA is F. Is Wehby any better?

It's hard to tell. Googling "Monica Wehby immigration" brought up just a single quote from last March, quote: "Secure the border but increase H-1B visas and guest workers." Along with that there's a TV clip from the Oregonian back in May of her in a primary debate mumbling some well-worn empty platitudes about going to the back of the line, securing the border, and so on — the stuff we've been hearing for thirty years while the Third World has been pouring in.

This, I'll guarantee you, is a candidate who has never given fifteen seconds consecutive thought to immigration issues, and never read a single sheet of paper or web page on the subject.

Wehby is a pretty hapless candidate altogether. Her current batch of TV campaign commercials focuses on whether or not Merkley pays his female staffers the same rates he pays males. As an issue of national importance, I'd rate that a tick or two below whether Pluto should be reinstated as a planet.

This is after fighting off allegations that Ms. Wehby plagiarized her health-care plan from, wait for it … Karl Rove. Plagiarizing from Rove is the political equivalent of burglarizing an empty house.

That's the GOP candidate for Oregon's Senate seat. Can't someone please put the Republican Party out of its misery? They shoot horses, don't they?