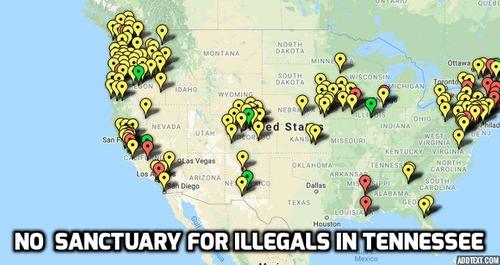 At Last! Oregon (Plus Tennessee And Iowa) Making Sanctuary Cities An Issue In Midterms

As I reported recently, Oregonians for Immigration Reform [OFIR] have just submitted to Oregon's Secretary of State more than 110,000 signatures on official forms in their effort to give voters a chance in November's election to repeal their state's longstanding illegal-alien sanctuary law.  OFIR's push to collect enough signatures to safely satisfy the 88,134 threshold for ballot qualification extended from last fall to Friday, July 6th, and the group's leaders (most of whom I know personally) had to put much of their personal lives on hold for that spell.

Besides the brute need to gather a semi-gazillion valid signatures, there were abundant other hurdles—OFIR President Cynthia Kendoll called them "spike strips"—that confronted the leadership enroute to qualifying.  And assuming that they do qualify (that rests on confirmation from the Secretary of State that there are enough genuine signatures from registered voters among those submitted), the fall campaign looms. So there'll be no rest for OFIR-ites until November 7th.

OFIR's exhausting experience provokes an obvious question: Wouldn't it be better if state legislatures passed sensible, enforceable laws (e.g. to combat illegal immigration) instead of forcing citizens to step up and make public policy by plebiscite?  After all, that's what we pay legislators for.

But nowadays, legislatures such as Oregon's are just as likely to add insult to injury—or here, it's injury to insult—by doing something pernicious that costs patriotic citizens immense blood and treasure to undo.  Or try to undo.

But occasionally, legislatures actually do something that's useful and responsible, immigration-wise.  For example, on May 23 Tennessee enacted a law forbidding sanctuary policies in any of its jurisdictions.

The bill involved, HB 2315 [PDF], was enacted in a relatively unusual way.  It passed the House 64 - 23 and the Senate 27 - 5, both on April 25 (see "Votes" tab at this link).  Legislative formalities were completed on May 9, whereupon the bill was sent to Governor Bill Haslam, a Republican.

Would he sign it?  Haslam held everyone in suspense for the allowed ten days, finally returning the bill to the legislature unsigned.  But also unvetoed, so it became law, to take effect on January 1, 2019.

How to account for the governor's profile in squishiness?  As reported in the Tennesean:

Before announcing his decision, Haslam outlined his three options on the bill, saying if he vetoed it, he was "relatively confident" there would be a call for a special session or the measure would be quickly taken up in 2019.

The governor said by vetoing the bill, he would prolong a discussion that would continue to stir up fear and confusion.

Haslam said if he were to sign the measure, he would be tacitly admitting that there is an issue with sanctuary cities in Tennessee.

"We spent a lot of time looking at what are the legal ramifications of this, and we became convinced that really other than expressly stating what was already allowed (it) didn't change (much)," he said.

According to the same article, the noisemakers urging Haslam to veto HB 2315 included entities we'd expect, such as the ACLU, the Southern Poverty [sic] Law [sic] Center [SPLC; "$PLC" here at VDARE.com], and "immigration law experts."  But also Nashville Police Chief Steve Anderson, whose opposition to HB 2315 is a hint that Haslam might be unaware of sanctuary-city realities on his own doorstep in Tennessee's capital.

Anyway, such squishiness is obviously far preferable to the stupidity of a veto.

Why "stupidity"?  Because if officials in a jurisdiction can't be bothered to get serious about illegal immigration when it's "not a problem," they're likely on the road to making it a problem, an intractable one.  As Heather Mac Donald wrote in her classic 2004 coverage of sanctuary cities:

[H]owever pernicious in themselves, sanctuary rules are a symptom of a much broader disease: the nation’s near-total loss of control over immigration policy. Fifty years ago, immigration policy might have driven immigration numbers, but today the numbers drive policy. ...

The real reason cities prohibit their cops and other employees from immigration reporting and enforcement is, like nearly everything else in immigration policy, the numbers. The immigrant population has grown so large that public officials are terrified of alienating it, even at the expense of ignoring the law and tolerating violence.

Tennessee's legislature consists of the 99-seat House of Representatives (currently 73 Repubs and 26 Dems) and the 33-seat Senate (28 and five, with two vacancies).  Notably, HB 2315 had 67 sponsors [PDF] in the House (including the Speaker)—and 12 in the Senate for the companion bill, SB 2332.  Also notably, Lieutenant Governor (and Speaker of the Senate) Randy McNally, a Repub, is enthusiastic about the outcome.

So what's actually in this new anti-sanctuaries law?  There's a lot to like!

The actual language, intelligible to non-lawyers, is all contained in Tennessee's Public Chapter No. 973 [PDF] (and Governor Haslam's excuse for effectively voting "Present" is spelled out in his message to the House Speaker, included at the document's end).

For example, here's part of the key definition:

...
(E) Requires the United States department of homeland security, or other successor agency, to obtain a warrant or demonstrate probable cause before complying with detainers from the department to maintaincustody of any alien or to transfer any alien to its custody; ...

The inclusion of "informally adopted" in the definition's preface is especially beneficial, as sanctuary policies are often the result of "wink, wink, nudge, nudge" arrangements between mayors and their cities' police chiefs.

And that sub-paragraph "(E)" is readable, but perhaps a bit complicated, so here's what it's about: Recently, spooked by lawsuits from the ACLU et al., some local jurisdictions across the country have been refusing to honor detainers for (primarily illegal) aliens issued by U.S. Immigration and Customs Enforcement [ICE] unless such detainers are accompanied by judicial warrants, something ICE probably finds difficult to arrange for on short notice.  So this part of the new Tennessee law tells all Tennessee jurisdictions that ICE detainers are to be honored, even without a warrant.

Fuller background in a press release from the Immigration Reform Law Institute is worth quoting:

The Immigration Reform Law Institute (IRLI) supports the recent announcement that federal immigration authorities will work with county sheriffs to execute Basic Ordering Agreements (BOAs) that will allow local law enforcement authorities (LEAs) to detain criminal illegal aliens in local jails for Immigration and Customs Enforcement (ICE) processing and removal from the United States. At a press conference on Jan. 17, officials from ICE, the National Sheriffs’ Association, and Major County Sheriffs of America announced the phased implementation of the BOAs for seventeen Florida counties.

Traditionally, federal immigration authorities have used detainer requests to ask LEAs to hold an alien until ICE can assume custody. However, as a result of several recent lawsuits and faulty court rulings that LEA compliance with ICE detainer requests violate alleged 4th Amendment rights of illegal aliens, many sheriffs have backed off of holding criminal aliens for fear of lawsuits. BOAs will resolve this issue because under a BOA ICE assumes immediate legal custody of the alien and the LEA is merely housing the alien pursuant to a contract with the federal government. A BOA is authorized by federal law and is analogous to what is being done in jails throughout the country that have contracts with the U.S. Marshals Service.

After defining sanctuary policies, Tennessee's new law forbids them and spells out the penalty for noncompliance:

Apparently HB 2315 as introduced cut off all state moneys to violating jurisdictions, and this was weakened by Amendment #3 to just economic-development moneys, but that's still not nothing.  (See the discussion of Amendment #3 at the "Summary" tab here.)

Another important feature is that the public is given standing to sue if feckless local officials institute sanctuary policies:

4-59-104.
(a) A person residing in a municipality or county who believes a state governmental entity or official has violated S 4-59-103 may file a complaint in chancery court in that person's county of residence.
(b) The person filing the complaint has the burden of proving by a preponderance of the evidence that a violation of $ 4-59-103 has occurred. ...

There's one feature of the new law that's not about sanctuary policies but is still pertinent to combating illegal immigration:

That concerns active cooperation between local or state law-enforcement agencies and ICE, wherein officers of the non-federal cooperators are deputized to enforce federal immigration law.  This is more commonly known as "287(g) authority."  According to the bill summary, the original language made 287(g) participation by Tennessee's agencies mandatory, and Amendment #3 throttled this back to simply allowing such participation.  This makes sense, as ICE's four-week training process for participating officers would predictably cause significant hardship for few-person policing agencies as are typically found in small cities and low-population counties.

And Tennessee isn't alone!  Iowa's state government did the non-stupid thing in April.  Their anti-sanctuaries bill, Senate File 481 [PDF], was actually introduced in March 2017, but it saw little action until this year.   The bill, in final form, passed by 55 - 45 in the House (where the Republicans hold a 59 - 41 advantage, but four Republicans voted against the bill and one Democrat voted for it) on April 3.  The Senate (Republican-dominated 29 - 21) passed it the next day, 28 - 18.

With legislative formalities completed, SF 481 went to Governor Kim Reynolds, a Republican, on April 10.  And she signed it into law that day!  It took effect on July 1st.

In Iowa, too, there were the usual claims that "We don't need no steenkin' anti-sanctuary laws" (because Iowa has no illegal-alien sanctuaries). But last year one county attorney blandly confirmed that they'd been refusing ICE detainers since 2014:

The Sioux County attorney says holding a person for an ICE request for detainer isn't legal.

Which doesn’t include a request from a federal agency.

And the national map of sanctuary jurisdictions assembled by the Center for Immigration Studies shows that about a dozen county jails in Iowa wouldn't honor an ICE detainer unless accompanied by such a warrant.

Like Tennessee's law, the Iowa law [PDF] is straightforward to read.  A couple of highlights:

So, a plea to Tennesseans and Iowans: Clone your immigration-woke state legislators and send the clones to infiltrate other states' legislatures.

And to Oregonians: thanks for ensuring that Sanctuary Cities will finally get into politics this November.

Paul Nachman [email him] is a retired physicist and immigration-sanity activist in Bozeman, MT