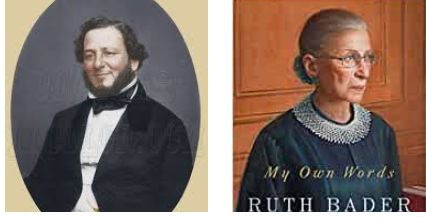 Earlier: Has Judah P. Benjamin Been Canceled or Memory-Holed?

With Ulysses S. Grant being toppled, it’s interesting to check out a 2002 speech by Supreme Court Justice Ruth Bader Ginsburg:

The Court begins a heavy sitting period tomorrow. At such times, I seldom stray from the briefs piled on my desk. But I could not resist a pause in today’s occupations to accept this award from the Jewish Council for Public Affairs, an organization comprising agencies devoted to the social imperatives of Judaism.

On walls of my chambers, I have posted in two places the command from Deuteronomy — “Zedek, Zedek,” “Justice, Justice shalt thou pursue.” Those words are an ever present reminder of what judges must do “that they may thrive.” There is an age old connection between social justice and Jewish tradition. Supreme Court Justice Arthur Goldberg, whose tenure on the Court, 1962-1965, was far too brief, once said: “My concern for justice, for peace, for enlightenment, . . . stems from my heritage.” Justice Breyer and I are fortunate to be linked to that heritage.

Preparing some years ago for a lecture on the Jewish Justices who preceded Justice Breyer and me, I learned that Louis D. Brandeis was not the first Jewish nominee to the U.S. Supreme Court. I have since read more about the man who might have been first, and thought perhaps you would find his life as intriguing as I did. The person who might have preceded Brandeis hailed from Louisiana. His name was Judah Benjamin. He was intensely involved in public affairs, though you and I would agree that he chose the wrong side.

In 1853, Benjamin declined the nomination of President Millard Fillmore to become an Associate Justice of the United States Supreme Court. Just elected U.S. Senator from Louisiana, Benjamin preferred to retain his First Branch post. His choice suggests that the U.S. Supreme Court had not yet become the co-equal Branch it is today.

Had Benjamin accepted the Court post, his service likely would have been shorter than the time I have already served as a Justice. In early 1861, in the wake of Louisiana’s secession from the Union, Benjamin resigned the Senate seat for which he had forsaken the justiceship. He probably would have resigned a seat on the Court had he held one, as did his friend Associate Justice John Archibald Campbell of Alabama. (Campbell, incidentally, opposed secession and freed all his slaves on his appointment to the Supreme Court. But when hostilities broke out, he remained loyal to the South.)

In other words, Judah P. Benjamin did not free his 140 slaves and did not oppose secession.

Benjamin is perhaps best known in the United States for his stirring orations in the Senate on behalf of Southern interests, and for his service as Attorney General, Secretary of War, and finally Secretary of State in the cabinet of Jefferson Davis. After the Confederate surrender, Benjamin fled to England; en route, he narrowly survived several close encounters with victorious Union troops, and the forces of storm and rough seas. Benjamin’s political ventures in the Senate and in the Confederacy were bracketed by two discrete but equally remarkable legal careers, the first in New Orleans, the second in Britain.

Having left Yale College without taking a degree, Benjamin came to New Orleans in 1832 and was called to the bar that same year. Although he struggled initially, his fame and fortune quickly grew large after the publication, in 1834, of A Digest of Reported Decisions of [the Supreme Court of the Late Territory of Orleans, and of] the Supreme Court of Louisiana. Benjamin’s book treated comprehensively for the first time Louisiana’s uniquely cosmopolitan and complex legal system, derived from Roman, Spanish, French, and English sources. Benjamin’s flourishing practice and the public attention he garnered helped to propel his election by the Louisiana legislature to the United States Senate. (In pre-Seventeenth Amendment days, until 1913, Senators were chosen not directly by the People, but by the Legislatures of the several States.)

Benjamin’s fortune plummeted with the defeat of the Confederacy. He arrived in England with little money and most of his property lost or confiscated. His wife and daughter settled in Paris, where they anticipated support from Benjamin in the comfortable style to which they were accustomed. He nevertheless turned down a promising business opportunity in the French capital, preferring to devote himself again to the practice of law, this time as a British barrister. He opted for a second career at the bar notwithstanding the requirement that he start over by enrolling as a student at an Inn of Court and completing a mandatory three-year apprenticeship before qualifying as a barrister. This, Benjamin’s contemporaries reported, he did cheerfully, although he was doubtless relieved when the Inn of Court to which he belonged, Lincoln’s Inn, determined to waive some of its requirements and admit him early.

Benjamin became a British barrister at age 55. His situation at that mature stage of life closely paralleled conditions of his youth. He was a newly-minted lawyer, with a struggling practice, but, he wrote to a friend, “as much interested in my profession as when I first commenced as a boy.” Repeating his Louisiana progress, Benjamin made his reputation among his new peers by publication. Drawing on the knowledge of civilian systems gained during his practice in Louisiana, Benjamin produced a volume in England that came to be known as Benjamin on Sales. The book was a near-instant classic. Its author was much praised, and Benjamin passed the remainder of his days as a top earning, highly esteemed, mainly appellate advocate. His voice was often heard in appeals to the House of Lords and the Privy Council.

Benjamin’s biographer tells us that, “[h]owever desperate his case, Benjamin habitually addressed the court as if it were impossible for him to lose.” This indomitable cast of mind characterized both Benjamin’s courtroom advocacy and his response to fortune’s vicissitudes. He rose to the top of the legal profession twice in one lifetime, on two continents, beginning his first ascent as a raw youth and his second as a fugitive minister of a vanquished power. The London Times, in an obituary, described Judah Benjamin as a man with “that elastic resistance to evil fortune which preserved [his] ancestors through a succession of exiles and plunderings.”

But, somehow, I suspect Justice Ginsburg will not be immediately canceled for her rather extensive praise for Benjamin, who bought 140 slaves when he acquired a sugar plantation (sugar being the crop cruelest on slaves).